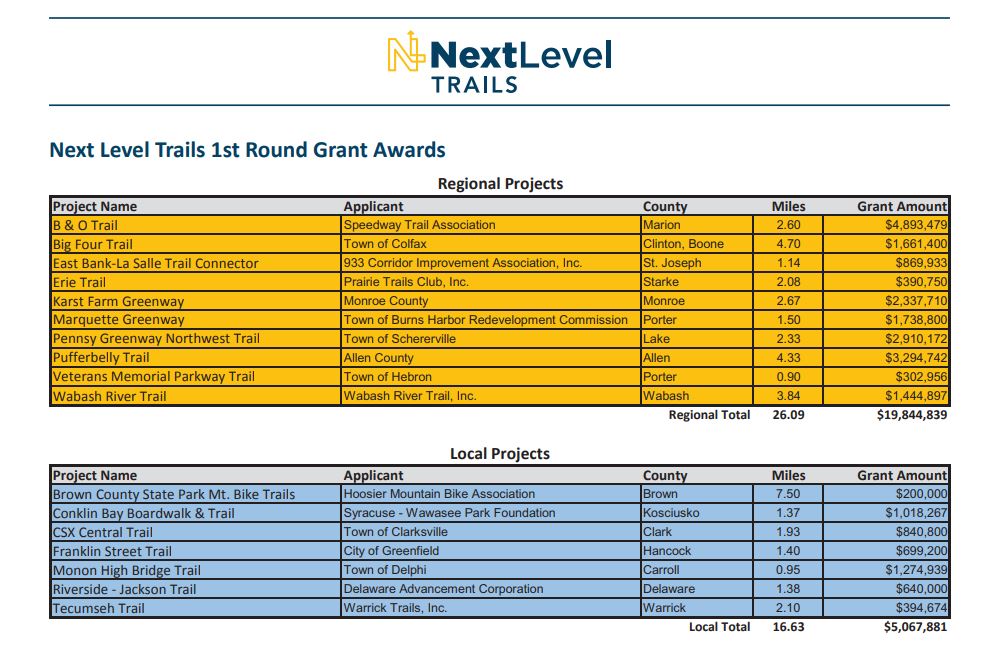 The next round of grants won’t be awarded until next year.

I wonder what Mayor White will do?

New Albany’s suburban-minded, self-congratulatory ruling caste is moving with characteristic pre-election haste to make the city safe for all the people just like them.

Wile E Gahan(Genius) is shining yet another spotlight on the shoddy chipped veneer of his own ego, joining with our culturally illiterate elites to merrily filch someone else’s idea about recreational rails-to-trails, surreptitiously scratching off the serial numbers, and heading down to the Quality of Life Pawn Shop for the cash to pay approximately 3% of a long-term project located almost entirely outside city limits.

Bait, meet switch. Neither a pathway to Bedford nor a series of triumphant press releases will help New Albany residents find alternative routes to work, obtain affordable housing, or keep their porches safe from petty thievery.

But look at us!

Operators are standing by to take your campaign donation, so call BR549 today!

Of course, we’re nodding wearily. It’s just another gold-painted brick in the putrid swamp of Mayor Gahan’s burgeoning cult of personality, this all-seeing, all-knowing Great Father of the New Albanians …

Is our TIF One Plati-numb Card valid in Bedford?

Gov. Eric J. Holcomb and Indiana Department of Natural Resources Director Cameron Clark today announced 17 communities and non-profit organizations will receive $24.9 million for 42 miles of new trail development as a part of the initial round of the Next Level Trails program.

“These 17 projects are a tremendous investment in quality of life for Hoosiers as trails create important connections within and between communities across our state,” Gov. Holcomb said. “Our growing network of trails is more than a recreational and transportation amenity – it’s an important tool for economic development by helping Indiana attract and retain the best workforce in the country.”

Gov. Holcomb made the announcement at Speedway Indoor Karting, next to the B&O Trail, with Indianapolis Mayor Joe Hogsett, Town of Speedway manager Jacob Blasdel and other leaders. The Speedway Trail Association will receive a grant of nearly $4.9 million to acquire and develop 2.6 miles of new trail. The new trail will connect residential and commercial districts in Speedway and Indianapolis’ west side by extending the existing trail 1.7 miles east to Michigan Street and 0.9 miles west toward Girls School Road.

… DNR received applications for 82 projects located in 42 counties, requesting a total of nearly $144 million in funding for more than 240 proposed miles of hiking, biking and riding trails. DNR reviewed the applications for eligibility, and a multi-agency committee evaluated the proposals based on theNext Level Trails program objectives.

Rails, trails, holy grails: “That’s why we’re here,” babbles Gahan about yet another once-in-a-lifetime opportunity to economically develop others at his own city’s expense.

From railbanking to mountebanks, or compensation for landowners in rails-to-trails projects.

Bait and switch: Empathy on empty as Jeff Gahan asks you to think about an embryonic rails-to-trails fantasy rather than the resident killed by a driver while riding his bicycle downtown.