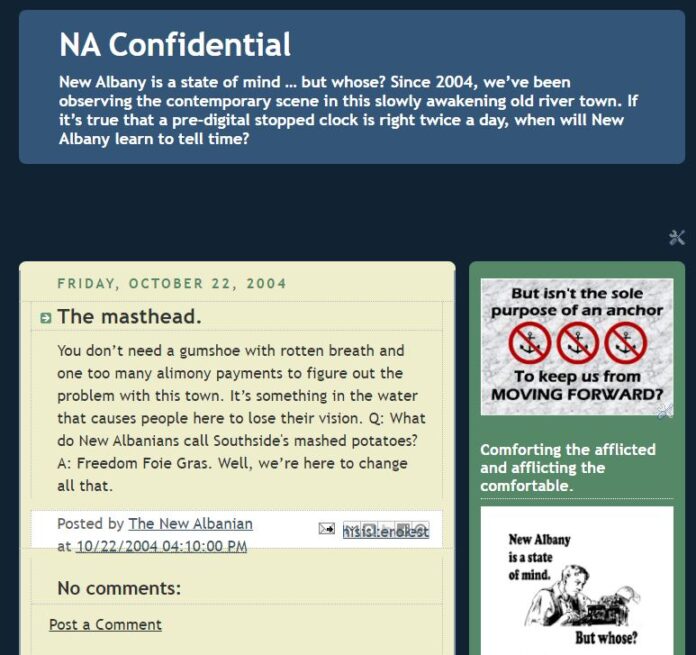 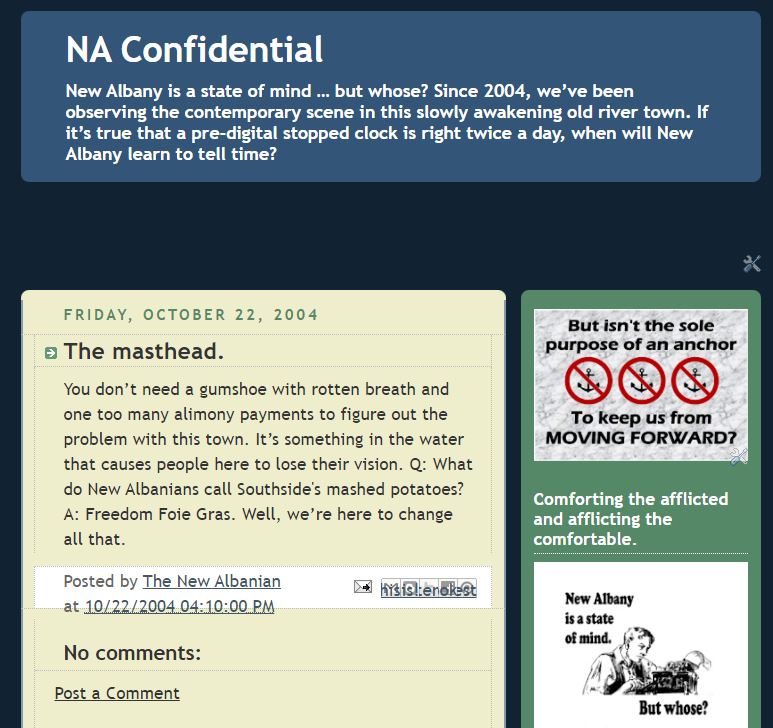 It cannot be denied that I’m a slow learner, a late bloomer and a serial procrastinator.

This much is perfectly clear. Actually, I’ve never cared enough to even try dodging these compliments.

The odd part has always been that once I get around at long last to learning, blooming and/or making up my mind, it’s a done deal. Once a decision has been determined, right or wrong, it is pretty much irrevocable with me.

So it was last week when I awakened to thoughts about NA Confidential’s future, and concluded it has none, at least in its present format. I’ll continue writing elsewhere, and soon the blog will cease to exist as an active, ongoing entity.

NAC began in 2004 as a way of channeling a long-gestating insight, this being the importance of grassroots localism. It was and remains my view that people tend to obsess about hugely complex national and international topics to the exclusion of approachable issues outside their front doors, and in their own communities, because theatrically pontificating in broad terms is easier than getting involved with the grit and grime of specifics.

NAC started out as a diary of sorts, a place to chronicle my journeys, promote the beer businesses I was involved with at the time, channel my inner Mencken, and write about anything I damn well pleased. Other folks helped out with writing (Randy, Jeff, Lloyd), and then they didn’t.

The blog grew into a public gathering spot, a function that ebbed drastically once social media exploded. All along, it was a spot to broach subjects no one else would. I followed these stories where they took me, and it didn’t always make people happy.

They’re entitled to their own opinions, although not their own facts.

You don’t need a gumshoe with rotten breath and one too many alimony payments to figure out the problem with this town. It’s something in the water that causes people here to lose their vision. Q: What do New Albanians call Southside’s mashed potatoes? A: Freedom Foie Gras. Well, we’re here to change all that.

A tad cheeky, and ultimately a point to debate, although others can decide the extent, if any, of the blog’s influence hereabouts. Irrespective, the blogging experience has changed me, and nowadays I’m at a crossroads amid the crossfire. Consequently, there are several good reasons for acknowledging various irrefutable realities and drowning the blog in the nearest available bathtub.

Allow me to explore the reasoning.

Localism? Not so much. Between our toxic social media fixation, the pandemic and Trump’s invasive cult of personality, interest in provocative takes on local matters in Nawbany has largely disappeared. Readership has responded accordingly, by plummeting. This should please my betters.
Part of this decline owes to the scattershot essence of Blogger; it is an utter piece of crap, and a dysfunctional platform overall. For at least a decade Blogger has been unsuitable for my intentions. Now it’s largely unusable owing to recent revisions, and I should have exited long ago when the going was good. That one’s on me.

In addition, I turned 60 in August, and began paying attention to what the mirror (and my wife) was trying to tell me about the meaning of life. In short, it’s time for an autumn (of my years) deep cleaning and reboot. What better time than multiple, horrifying daily existential crises?

Then an e-mail notice came, reminding me it was time to renew my rogerbaylor.com domain name. Having finally learned a bit about WordPress owing to my position as digital editor at Food & Dining Magazine, and with the publication’s house web guru Jason around to advise me, starting anew at my own web site suddenly became an attractive option.

The year 2020 already was the most tumultuous year of my life, and probably yours, too. Why not end it with closure, by euthanizing NAC, and moving forward to something different?

Of course there’s another aspect to the blog’s impending termination, a process which began in earnest the moment last year’s municipal election cycle concluded.

Jeff Gahan’s unprecedented third mayoral term (save for C. Pralle Erni’s four), and especially his increased margin of victory in the 2019 election, constituted voluminous (and perhaps inevitable) handwriting on the wall. It was a clear, unmistakable vote for civic fantasy, and against truth telling, whether by a malcontent like me or on the part of perpetually somnolent local newspapers … or anyone else, for that matter.

Accordingly, a solitary dissident at a blog parked at the woefully deficient Blogger hell hole simply cannot hope to make a difference in such a dismal, uncomprehending milieu. Ironically, what it can do is make the dissident’s own position unsustainable — and it has.

None of this thrills me, but the truth of it is simply undeniable, and that’s why I’ll go through the narrative a final time before NAC self-destructs. Accordingly, let’s award credit where it’s due, sans snarkiness.

I fought Nawbany, and Nawbany won.
That’s it, in a nutshell. As an intelligent, well-educated and worldly person, I can fully appreciate the tactical deficit of my coordinates in this pandemic year, as pinned down in a fox hole with massed (metaphorical) artillery pointed in my general direction.
Well played, dominant cadres. I’ve learned that “it’s the way things work here” is more than a recurring promise; it’s a big-ass buzz saw, and I’m sliced, diced and vanquished.
Evidently “check mate” means the same thing in all of those European languages I wish had come easier to me so as to facilitate being a joyful expatriate. It looks like we’re marooned here until the house is paid off. After that, Ireland (or Malta, or Bolivia; whatever), here we come.
Verily, the governing Nawbanian clique’s “lone dissident on the grassy know-it-all” containment strategy for the past seven years has proven to be highly effective. Granted, it took a few dozen of them to whip one blogger acting alone, but make no mistake: The lash of the nabob’s whip is real, and accordingly, I’m whupped.
Cutting me off from any “official” political and governing dialogue is only a small part of it, because the community pillars have completely succeeded in institutionalizing a local perception of me as social misfit and pariah, to be shunned by “right thinking” people as if I were a member of India’s untouchable caste.

Evidently if you whisper often enough that Roger’s a dangerous nutcase, otherwise sane and intelligent people will start to believe it. The ones who don’t? They’ll merely say they regret the inconvenience, but just can’t risk being seen with you – you understand, they’ll say amid the furtive glances, it’s just business.

Yes, I understand the obligations of current accounts, although frankly, some of you should be ashamed to spend hours denouncing the perfidy of national Republicans while simultaneously encouraging crickets to chirp when it comes to the eually repellant habits of local Democrats. That’s cowardice, and it’s also hypocrisy. I genuinely feel bad for you, but really?

Toss a starving dog a bone. Maybe just a wee shred of resolve, every now and then?

What’s more, in so many of these “tsk tsk” instances, it has not mattered in the slightest what I actually said or wrote to prompt a flurry of finger-wagging; folks have concluded automatically that I’m mistaken, not to mention disreputable, based on what they imagined me saying or writing, and not actually hearing or reading it. Purportedly it is understood by those who – you know – understand these sort of things.

Frustrating, but also quite brilliant.

I’m stymied, hung out and left to dry. Like I said, full credit where it’s due. The Kool-Aid is strong, and I am weak. Long live the junta!
—

Furthermore, the ruling elite came to an astute recognition that while they cannot hurt me personally, people around me are vulnerable. It’s a crude, blunt-edged form of reprisal, as well as a highly efficient one. In good conscience I can no longer risk the threat of collateral damage to innocent bystanders.

My earnest efforts in 2020 to remove the political element from the blog have been easier than I imagined, but ultimately it’s futile. The torture is unlikely to stop, the Blogger platform remains inadequate for future writing, and the blog as currently constituted is dead in the water, adroitly blockaded by local arbiters, blithely shunned by the aspirant vanguard, and abjectly short-circuited by its own host platform.

I can take a hint and surrender, dear (leader).

Granted, I might start again at a new website and continue calling it NA Confidential. But it needs to be retired. At the forthcoming Roger Baylor Dot Com there will be an archive of the 15,000+ posts appearing at NAC since 2004, albeit completely inactive in terms of new content. It will be maintained strictly for historical interest, and as a sketchbook for future writing.

Resurrecting NAC wouldn’t be the same. I played the game and lost. So it goes. It may not have been fair or square, and yet make no mistake; I knew exactly the nature of the surreal absurdity I was getting into way back in 2004, purporting to chronicle the life and times of a city that hasn’t been on the cutting edge of anything since the 19th century, and probably never will.

As proof, note that in their most recent races, Donald Trump (Republican President), Jeff Gahan (Democratic Mayor) and Scott Blair (Independent City Council) each won the 6th council district by almost exactly the same percentage of vote as the others.

Huh? If you can explain that, then it’s your turn to grapple with this town’s psychotic DNA.

Looking at it objectively, NAC can be said to have accomplished some positive outcomes; just the same, it is exhausted. So is the blog’s creator.

NAC is the only Nawbany blog that truly mattered, ever, except blogs seldom matter here, ever, especially when pursuing the sort of subject matter that differs with the prevailing “mentality” (rest assured I use this term guardedly).

In the beginning, back in 2004, good friends warned me that we’re a barely literate, perennially dirty little river town, and likely would always be this way, forever.

I’m laughing no longer. Stick a fork in me, because I’m done.

To those who have read, thanks for reading, and for all your support over the years. When the new digs are ready, I’ll let you know, as long as you let me know if we ever arrive at answers to the opening questions.

New Albany is a state of mind … but whose? Since 2004, we’ve been observing the contemporary scene in this slowly awakening old river town. If it’s true that a pre-digital stopped clock is right twice a day, when will New Albany learn to tell time?
—
September 24: ON THE AVENUES: Magic and loss.

September 17: ON THE AVENUES: Stuck inside of Nawbany with the Flanders blues again.

September 10: ON THE AVENUES: The Weekly Wad lives on in the minds of malcontents.

September 3: ON THE AVENUES: If you really want to be my friend.