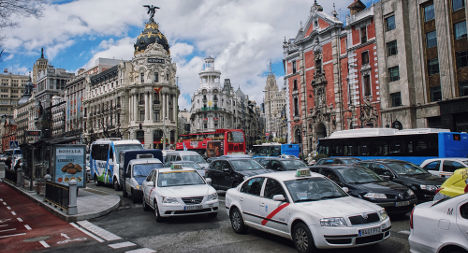 Such nice buildings. One imagines that in Spain, historical preservation advocates surely double as supporters of schemes to get cars off the street and people on them.

Does Madrid have a Tree Board?


Madrid Takes Its Car Ban to the Next Level, by Feargus O’Sullivan (CityLab)

Starting in November, the city will make clear that downtown streets are not for drivers.

The days when cars could drive unhindered through central Madrid are coming to a close.

Following an announcement this week, the Spanish capital confirmed that, starting in November, all non-resident vehicles will be barred from a zone that covers the entirety of Madrid’s center. The only vehicles that will be allowed in this zone are cars that belong to residents who live there, zero-emissions delivery vehicles, taxis, and public transit. Even on a continent where many cities are scaling back car access, the plan is drastic. While much of central Madrid consists of narrow streets that were never suitable to motor vehicles in the first place, this central zone also includes broad avenues such as Gran Via, and wide squares that have been islands in a sea of surging traffic for decades. The plan is thus not just about making busy central streets more pleasant, but about creating a situation where people simply no longer think of bringing their cars downtown.

This might come as a shock to some drivers, but the wind has been blowing this way for more than a decade. Madrid set up the first of what it calls Residential Priority Zones in 2005, in the historic, densely packed Las Letras neighborhood. Since then, a modest checkerboard of three other similar zones have been installed across central Madrid. The new area will be a sort of all-encompassing zone that abolishes once and for all the role of downtown streets as through-routes across the city.