The Courier-Journal came a bit late to coverage of New Albany’s eleventh hour sewer ordinance, but once fully engaged, the Louisville newspaper correctly grasped the obvious.

Plain, simple, and in keeping with the real-world definition of the word “increase”: To make greater, as in number, size, strength, or quality; augment; add to.

C-J reporter Madeleine Winer did not become immersed in semantics.

The council voted to hike sewer rates by three percent in a 7-1 vote Tuesday night. The rate increase would cover the city’s ongoing improvements to its sewer system and equipment costs as well as the debt it owes on bonds it has used for improvements in the past, city officials said.

The vote is still subject to review by the public and wouldn’t go into effect until next July if passed again by the council.

Bizarrely, almost to the very last gasp, the Jeffersonville News and Tribune — which entirely missed the sewer ordinance’s first reading, and apparently still operates with a bare minimum of editorial supervision — continued its preference for obfuscating the increase with a series of euphemisms (settle down, Shane: “The substitution of a mild, indirect, or vague expression for one thought to be offensive, harsh, or blunt.”)

That’s right: An increase as structure change in large face, with “rates raised” coming in small print, although by this point, the ordinance had passed muster and it mattered very little.

Fascinatingly, for a while there, it was almost as though we were witnessing a wordplay competition among current and former newspaper staff members. How many different words can be substituted for the best and most obvious one, increase?

It is to the reporter Beilman’s credit that she at least tried to explain. Have you noticed that the News and Tribune’s upper management almost never participates in such exchanges on social media, though reporters invariably do?

A knight in shining armor rode to the rescue.

Tweeting on meeting night, reality began seeping into Beilman’s dispatches, as it was revealed that the rolling CPI average could be 4% or higher on monthly bills; then again, “bump” and “nudge” are absent numerical thresholds. 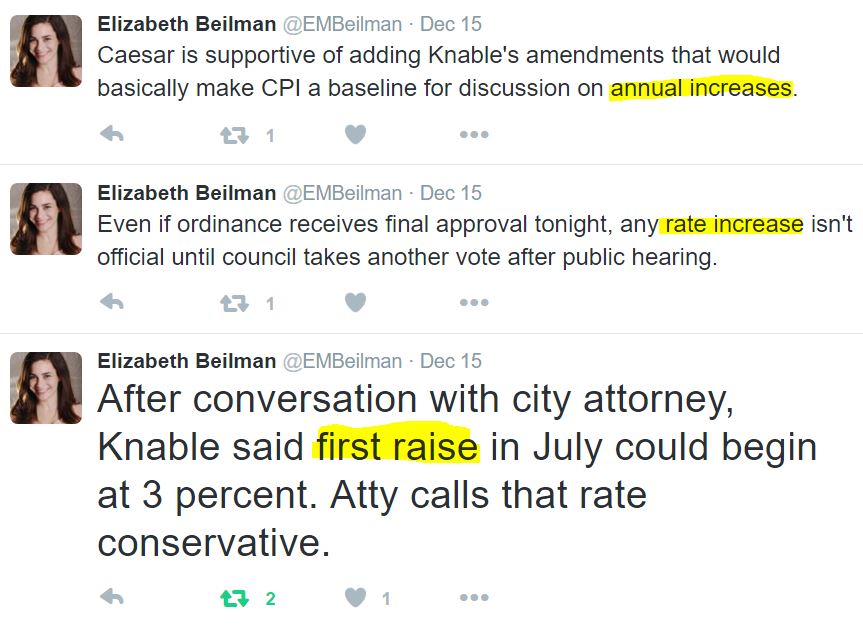 Again to Beilman’s credit, by the time the article was written, the euphemisms were dead and buried. 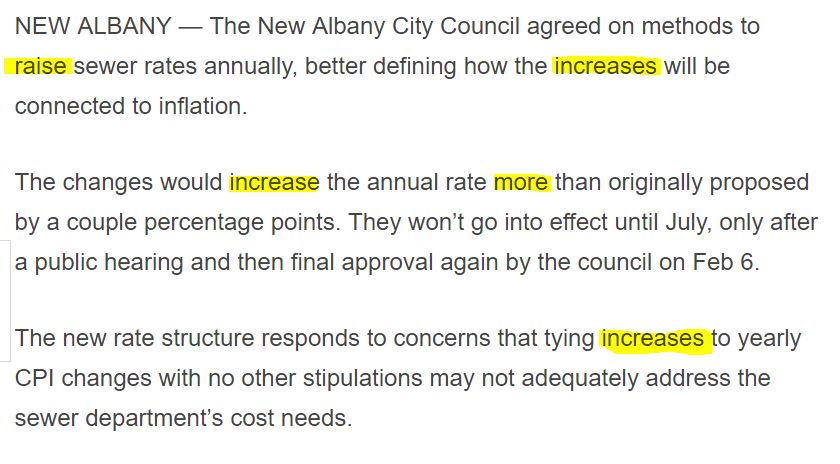 I remain bewildered. If the objective of a headline is to grab the reader’s attention, then doesn’t using the most accurate word (increase) achieve this at the bare expense of four additional letters (bump) and an added word (structure changes)?

In closing, here’s a concise introduction to the relationship between journalists and politicians.

What is clear is that the relationship between journalists and politicians can have a significant impact on the functioning of a fair and just society. Politicians make decisions and take action on behalf of the public. Journalists scrutinise those decisions and report the implications to the public.