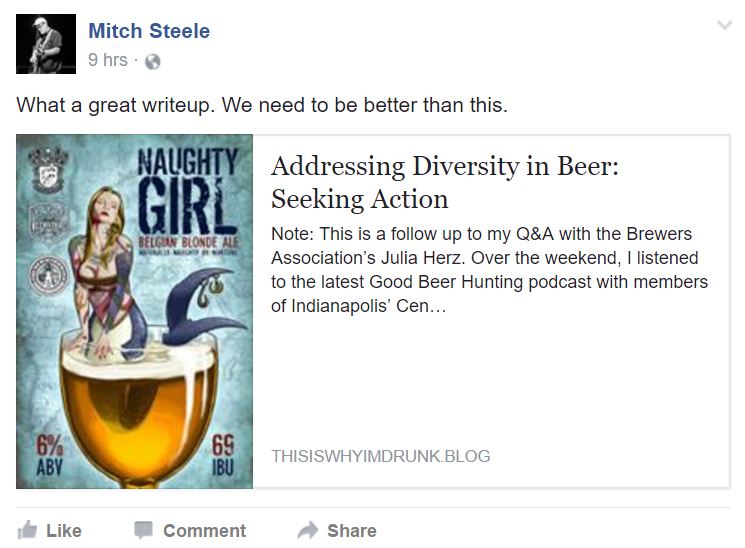 Let’s put an old saw to the test: Is it really true that any publicity is good publicity?

Specifically, if a New Albanian Brewing Company beer and beer label, as conceived on my watch in 2011, appears alongside an article by a national recognized blogger in 2016 and then is linked on Facebook by a brewing superstar, that’s wonderful, right?

Mitch Steele, formerly of Stone Brewing Company and one of my heroes in the field of “craft” brewing, is pointing to Naughty Girl in the context of “doing better” with issues of diversity and equality, presumably because Naughty Girl does worse.

This latest embarrassing reference to my checkered past starts here, with a very good blog post.

Addressing Diversity in Beer: Seeking Action, by Bryan Roth (This Is Why I’m Drunk)

Over the weekend, I listened to the latest Good Beer Hunting podcast with members of Indianapolis’ Central State Brewing. Among the variety of topics covered by host Michael Kiser was a lengthy discussion of the business’ commitment to social issues of equality and diversity. The Central State crew spoke with earnest about their interest in LGBT issues and Indiana’s political climate.

On Tuesday, I saw a brewery with a beer named “Date Grape.”

This contrast is not just the push-pull of today’s beer industry, but American culture as well. It’s easy to find wonderful examples of people, businesses and institutions doing what’s right for the advancement of human beings. Then you turn around and that 180 feels like more than a metaphor when you see downright ignorant acts.

Later in his piece, Roth links to my blog column about the Great Leg Spreader Crisis of 2015.

The PC: Ripped straight from the pages of an Onion satire: “13 white males not really so eager to discuss issues like racism and sexism.”

In a comment to Roth’s post, I linked to my follow-up a year later. I merely wanted him to know that the story didn’t end in 2015.

Can I get a “do-over” on Naughty Girl?

Earlier today, I spoke with Roth by phone in connection with another article he’s writing about this general topic, and he asked how all this has changed me, and in answering, I said that the jury’s out because change always is a work in progress.

Leg Spreader gave me pause, as did the reactions of some colleagues on the guild board. In turn, I started seeing Naughty Girl in a different light. My professional life was evolving during the same period of time. These chain reactions in consciousness continue, and I’m constantly taking mental notes.

Have I become some sort of expert on these issues, whether they pertain to sexism, equality, diversity or a hundred other thoughts of cultural worth, worth having?

Of course not. All I can do is try to be better informed, and as a result maybe improve myself as a person. All I can do is try my best to listen, think and act responsibly. To me, the beer revolution always meant something better, far beyond the beer in the glass. I’m disappointed in myself that when presented with an opportunity to reflect this ethos with regard to a Belgo-Indian Blonde Ale being brewed in 2011, I chose a lower common denominator.

But what’s done is done. Now, I’ll do what I can do. I appreciate the work that Roth and others like him are doing to keep the sun shining on “craft” brewing’s ongoing sexism issues.

For a long time, the Brewers Association rightfully needed to focus on political and business issues in order to better grow their portion of the industry or further define “craft” and its value. But that time is over. The revolution has happened. Now it’s time to think socially and consciously.