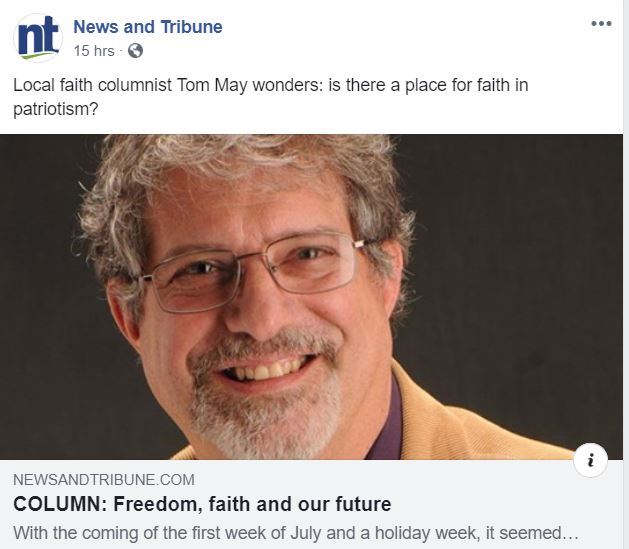 Does Tom May still rank a second “general interest” column in addition to the Sunday sermon?

When will free thinkers and non-theists get equal time, not with piecemeal “guest column” replies to the newspaper’s two resident evangelists, but via a weekly counterpoint of our own?

COLUMN: Freedom, faith and our future by Tom May in the Jeffersonville Hansonian Devotional, soon to be renamed the Tom May Content Aggregation Mechanism

… Is there a way that a person of faith can be patriotic today? Across our country, people of the United States are encouraged to show their patriotism – their love for their country and the freedom that it represents – on this special time of the year, but is there a place for my faith to fit it to the celebrations?

When it comes to the general public, the majority of Americans affirm the belief of this definition. “True religious freedom means that all citizens must have freedom of conscience, which means being able to believe and practice the core commitments and values of your faith.” A slight majority of 55 percent held to this opinion. This definition is down from almost 70 percent in a similar survey in 2012. It appears that while most still agree, Americans are feeling less certain about the definition.

We are not sure about what faith means in our culture. We are even less sure of how to live that faith each day. Perhaps it is because we are not doing as clear a job teaching our faith, handing the mantel to the next generation.

What should a person of faith do? Foremost the person of faith should not be silent. Tom Minnery, in his book, “Why You Can’t Stay Silent: A Biblical Mandate to Shape Our Culture,” writes, “Being salt and light in this age means contending responsibly for godly standards. There is no escaping the mixture of religion and politics, because nearly every law is the result of somebody’s judgment about what is good and what is bad.”

Famous evangelist Billy Graham’s son Franklin writes on his father’s website, “While followers of the Lord Jesus Christ should never resort to violence, we must do all we can to resist evil. As Mr. Pence has said, we are not to remain silent when moral anarchists are attempting to extinguish any influence of Biblical morality in our government, schools and businesses.”

May then relates a tired Red Skelton anecdote about the Pledge of Allegiance — no, seriously.

But don’t take this pagan’s word for it. There was an impeccably faith-based reply at the pews-paper web site, and it’s a powerful rejoinder.

As a pastor in town I’m very cautious in writing to the newspaper to share my opinions on religion. I use extreme caution so as not to offend people. I firmly believe in everyone’s freedom of religion and their opinions.

I read Tom May pretty much every week. Our religious and theological traditions are very different and I find myself often disagreeing with him. Having said that, he is entitled to his perspective and I applaud his willingness to share his faith with others. He seems like a fine person and while I often disagree with him, it’s just a simply different perspective.

His most recent article, however, crosses a line. Faith, freedom, and culture are, of course, worthy of conversation. In his observation on freedom of religion, I would agree that we are free to practice our religion without interference from the government. Yes. Absolutely. I would also say that religious freedom also accommodates people who are not people of faith. People of faith are free to practice their faith; people who are not people of faith have a right to not practice faith. The United States does not have an official religion and that is, I believe, a good thing. I don’t know if we are in agreement to the right of people not to practice faith but we certainly agree that people should have the freedom to practice their faith as they so choose.

All of my education has been in seminaries—-I entered the seminary at age 18. I am a person of faith and have always been. My entire adult life has been focused on different aspects of ministry. My faith is something I take seriously. Mr. May included this passage in his article that was very irritating. He wrote:

“Famous evangelist Billy Graham’s son Franklin writes on his father’s website, ‘While followers of the Lord Jesus Christ should never resort to violence, we must do all we can to resist evil. As Mr. Pence has said, we are not to remain silent when moral anarchists are attempting to extinguish any influence of Biblical morality in our government, schools and businesses.’ “

First, Mr. Pence is a politician. He is not a religious leader. He is not a person who has expressed a great deal of support for religious freedom. His verbiage ‘any influence of Biblical morality,’ is exclusive terminology. By Bible is he referring to both the Hebrew Scriptures and the New Testament? If his concept includes the New Testament, he’s leaving out people who are Jewish. Is he including the Koran? The Book of Mormon? Buddhism? Hinduism? When Mr. Pence was the Governor of Indiana his religious freedom bill was not about allowing people freedom of religion, but allowing religious people the right to discriminate against people whose lifestyles he found morally wrong. He was called out for it and had to backtrack. Having said all of this, Mr. Pence is a politician. As a minister I have found many politician’s religious convictions to be as plentiful and reliable as $9 shoes. He shouldn’t be cited as a religious leader.

And Franklin Graham. I didn’t criticize is father. I think Billy Graham was an honorable man who found himself burned by may of his political connections. Badly burned. But Billy tried, really hard, to stay above the fray. Franklin has jumped into the fray and is more interested in political ideology than he is with God. He loves to quote Scripture—-often grotesquely out of context—-to make his point of view sound like Christianity. For many of us, Franklin Graham is the prototype preacher to NOT become.

As a person of faith, I really do believe people faith can and should attempt to influence ethical conversations and I am a profound fan of the religious liberty we have. This article, in my opinion, has lowered a rich, theological, ethical conversation into the partisan political morass our nation is currently wallowing in. Please know there are people of faith with differing perspectives who are willing to talk about their faith, share their ethical perspectives, and live patriotically, without falling into the partisan game of Mr. Pence and Mr. Graham.

When theists and atheists alike agree that something smells, maybe it’s time for Bill and Susan to re-examine a few of their faulty premises. Why is the local newspaper shilling for one variation of organized religion to the exclusion of others — or none at all?