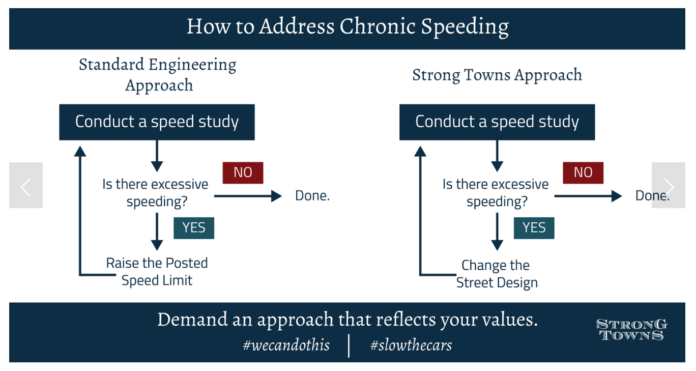 It occurred to me last night that as the coronavirus pushes unprecedented bicycle sales, here and across the country, Jeff Speck gave us a diagram for downtown streets purposefully rebuilt to accommodate modernity in the form of bikes and biking.

Our mayor threw it out the window.

Had he paid attention and been progressive, we now would have the ideal grid for a pandemic, the sort of step even Jeffersonville hasn’t managed.

Instead, we have more of what we plainly specialize in as a municipality: congenital underachievement, plain and simple.

It boils down to this.

According to Team Gahan, all traffic issues have been magically resolved by pure genius since the prime cuts of the Speck grid study were rendered into oatmeal-flecked, fat-encrusted sausage to suit the needs of pay-to-play campaign finance.

Yes, Greg you’re absolutely right; four-way stops are needed in the neighborhoods. Drivers occasionally run a four-way at full speed, but usually they at least slow before doing so, whereas stop light signals impel drivers to increase their speed as they approach the intersection.

But unless some of them are placed on Spring Street itself, or something else done to slow ever-escalating speeds (which police bizarrely deny even occur), heavy trucks will continue to travel in excess of 40 mph THROUGH A NEIGHBORHOOD WITH MORE CHILDREN LIVING THERE THAN AT ANY TIME IN PHIPPS’ RESIDENCY AND MY OWN.

Phipps need only glance outside his window at the tonnage streaking past and feel the vibrations, but he won’t, because City Hall is in denial, and City Hall lickspittles are not allowed to ask questions pertaining to demonstrable reality. Big Daddy must be obeyed, and Spring must remain an artery for dipshit drivers.

Because, I suppose, that’s who we are as a city: enablers for misbehavior.

We can change this for the better. All we need is a willingness to act. Why must it be this hard to convince them to attack problems that can be seen plainly with their own eyes?

Perhaps it’s because they refuse to look.

NEW ALBANY — The most prominent concern for residents is traffic, and it’s time to ramp up efforts to ease those worries, New Albany City Councilman Scott Blair said during what may be the last virtual gathering of the body.

Traffic was the primary issue discussed during Thursday’s council meeting, with members expressing different ideas for how to address what they said is a city-wide problem.