I’m cross-posting this weekend. The article offered here about Kentucky Common beer is something I’d planned on sharpening for use in my print-edition Food & Dining Magazine beer column (and still might), but I’d reserved a keg of Falls City Kentucky Common, received it, and need to make a tout.

Pints&union is open Friday and Saturday for now, probably until the second week of July, when hours will expand as we “reopen.” Those details can wait. Until then, and I’ll be candid, those of our adherents who’d like to further the cause — and help us survive a bit longer — should allocate a bit of their discretionary income to buy a meal and a growler.

Here’s some more honesty: While others in town pretend neither the pandemic nor a resurgent Black Lives Matter movement ever happened, Joe Phillips has run toward every damn fire he’s seen the past three months. While so many others in the local restaurant business were whining about science (“but I don’t WANT to believe it”) and doubling down on their distaste for essential social justice, Joe was feeding people, helping people and getting involved with people to further their causes.

If you don’t approve of reality in this sense, then maybe you weren’t a customer in the first place. If you do, and you were — and are, and wish to be still — then please think about coming down and spending a few bucks.

Thank you. And now, Kentucky Common. 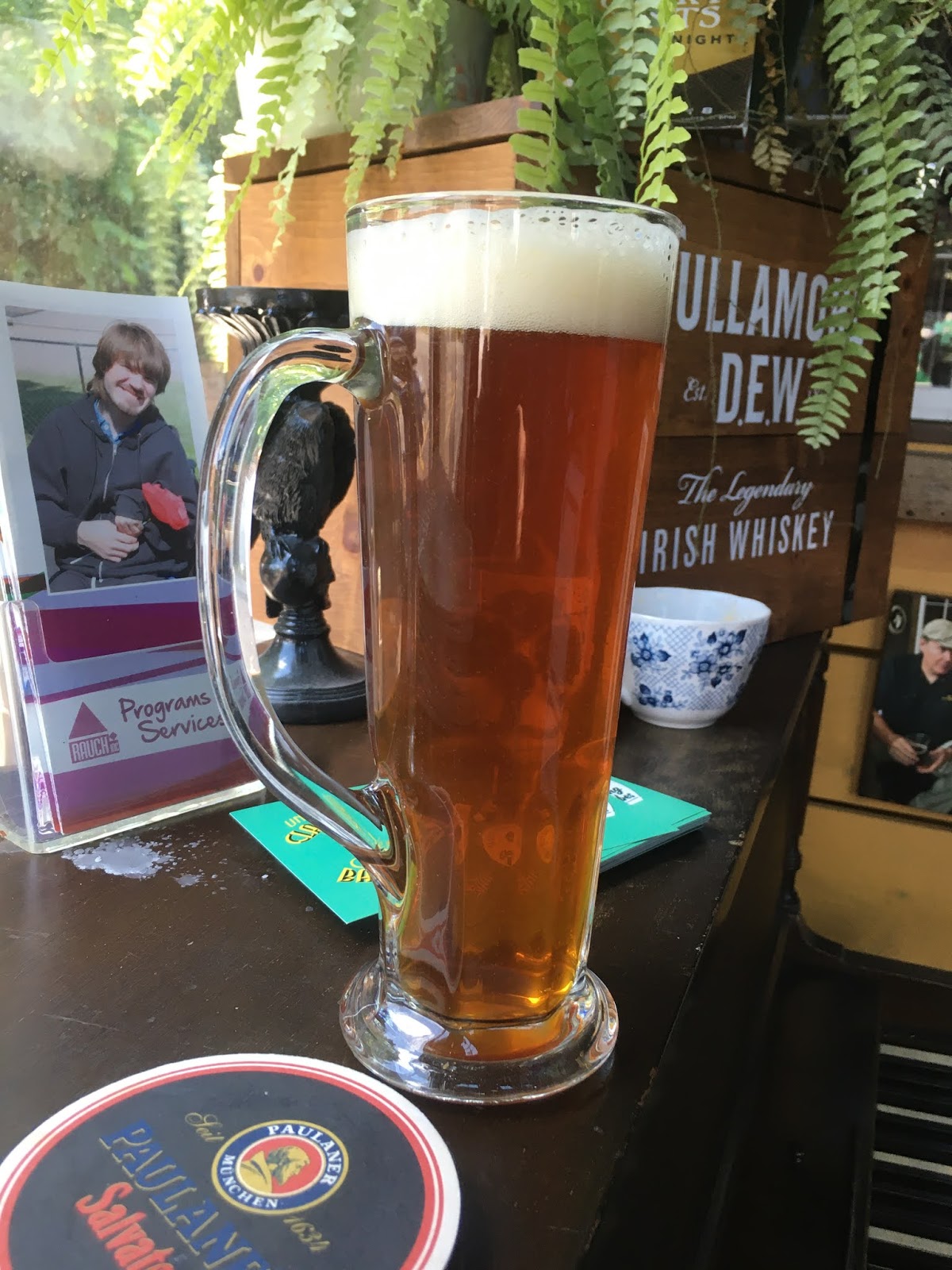 Anything except common, that Kentucky Common.

In a narrow sense, bourbon is distilled beer. It’s a fermented mash of grain with no hops or spices added, destined for a very different outcome.

But this very analogy confuses the specific with the general. By definition, bourbon is a particular type of whiskey native to Kentucky, while Louisville’s craft breweries produce many varied types (or styles) of beer, ranging from India Pale Ale (ale) to Bohemian Pilsner (lager), encompassing numerous (limitless?) flavor profiles.

What most beer drinkers in metropolitan Louisville probably don’t know is that one style of beer is indigenous to the state of Kentucky. It’s as specific to the wider world of beer as bourbon is to whiskey, and it likely was the single biggest-selling type of beer in the city of Louisville 125 years ago.

It is known as Kentucky Common, and ironically — perhaps even obtusely — it’s a style not often brewed these days by breweries located in city or state.

Note also that Falls City Bock, a superlative dark lager and one of the finest American-style Bocks to hit my lips in a good while, still is available in growlers at the same price. Don’t force me to drain this keg all by myself, people.

Now I’ll explain to you why the commonality of history matters, and why I personally enjoy Falls City Kentucky Common so much.

Prior to the contemporary craft beer era, most North American beers were brewed according to the broad parameters of styles that originated in Europe and were brought here by immigrants. Almost all of these styles came from the British Isles (in colonial times) or Germany and Central Europe (from the 1840s, on). Recall that “microbrewing” began only in the 1970s, and didn’t reach any semblance of critical mass until the late 1990s.

While brewers from Europe may have come to the United States with traditional recipes in mind, they often found that it was necessary to adapt to New World realities. Perhaps the most noted example of this shift came with lager beers in general, and Pilsners in particular.

Transplanted German brewers were compelled to adjust their thinking to suit climactic conditions and the raw materials at hand, particularly six-row barley as the malt backbone of their beers. Now, 150 years later, we can see that German and Bohemian Pilsners and their American cousins, pre-Prohibition “adjunct” Pilsners, are two separate branches of the same tree.

In like fashion, what we now refer to as “California Common” (or Steam, which is a term copyrighted by Anchor Brewing) reflects a hybrid brewing approach dating to Gold Rush times. Another uniquely American style is “Cream Ale,” which most of us of a certain age always will associate with Little Kings from Cincinnati. Cream Ales came about because 19th-century breweries specializing in top-fermented ale styles (the British tradition) sought a counterweight to increasingly popular German-sourced golden Pilsners.

Kentucky Common fits this paradigm. Here’s a bit of history of which you might be unaware, courtesy of the Beer Judge Certification Program.

A true American original style, Kentucky Common was almost exclusively produced and sold around the Louisville Kentucky metropolitan area from some time after the Civil War up to Prohibition. Its hallmark was that it was inexpensive and quickly produced, typically 6 to 8 days from mash to delivery. The beer was racked into barrels while actively fermenting (1.020 – 1.022) and tightly bunged to allow carbonation in the saloon cellar. There is some speculation that it was a variant of the lighter common or cream ale produced throughout much of the East prior to the Civil War and that the darker grains were added by the mostly Germanic brewers to help acidify the typical carbonate water of the Louisville area. Up until the late 19th century, Kentucky Common was not brewed in the summer months unless cellars, usually used for malting, were used for fermentation. With the advent of ice machines, the larger breweries were able to brew year round. In the period from 1900 to prohibition, about 75% of the beer sold in the Louisville area was Kentucky Common.

In its heyday, Kentucky Common would have been a localized example of “present use” beer, brewed in 6 – 8 days, low in alcohol content, delivered to taverns while still young and intended to be finishing its fermentation in the wooden barrel when first tapped. Kentucky Common was consumed quickly at a low price point.

This is why accounts of the period refer to Kentucky Common as being the working man’s choice. Rushing the growler in Louisville in the year 1900 meant sending one of your kids to fetch a (literal) bucket of beer from the neighborhood watering hole for pennies – and the liquid in the pail probably was Kentucky Common.

The typical grist for a Kentucky Common might have been 65% six-row barley, 30% corn, and 5% dark malt enough to resolve the brewer’s chemistry issues and give the finished product an amber to light brown appearance (Falls City uses rye).

Hopping was minimal, with American hop varieties used for bittering and just a pinch of aromatic (and more expensive) imported German hops at the end of the boil. Brewers likely used an aggressive house ale yeast to jump start the fermentation. Ingredients and techniques for making Pilsner were reserved for Pilsner, often the higher-priced “special occasion” beer.

There’d have been as many different interpretations of Kentucky (and Southern Indiana) Common, riffing off this basic model, as there were brewers– several dozen in the metro at local brewing’s acme in the 1890s.

Today, the modern version brewed at Falls City might be the city’s most unique beer simply because no one else in town regularly brews an “Amber Cream Ale.” Exceptions include Apocalypse (brewer Leah Dienes helped write the official style definition), Old Louisville and Against the Grain, but availability isn’t year-round at those establishments. Seldom can we find a beer for direct comparison in terms of flavor profile.

Falls City Kentucky Common has an amber hue and looks a bit like a Dos Equis, but the resemblance ends there. It’s malty, not hoppy, with a bready flavor touched by caramel. The rye peeks through, adding complexity. The body is light, and there is hint of fruitiness. You’ll notice an element of sweetness derived from the use of corn as an adjunct; it’s something most mass market Louisville beer drinkers wouldn’t notice because it’s generally present in Miller and Coors products (less so AB-InBev).

I like Falls City Kentucky Common for what it is: a solid summertime quencher with enough beeriness to maintain interest, and to pair with assertive food.

Providentially, Pints&union is working with Freedom Run Farms via the LEE Initiative’s Restaurant Reboot Relief Program and we’ll be featuring lamb dishes, and my guess is the Kentucky Common will go nicely with these.

June 11: ON THE AVENUES: Some enchanted evening, you may see a stranger.

June 4: ON THE AVENUES: There, there. People are dying, so you may have to wait until 2021 for your pork chop sandwich.

May 21: ON THE AVENUES: Godlessness in defense of heathens, infidels, idolaters, atheists, non-theists, irreligious people, agnostics, skeptics, heretics and apostates.