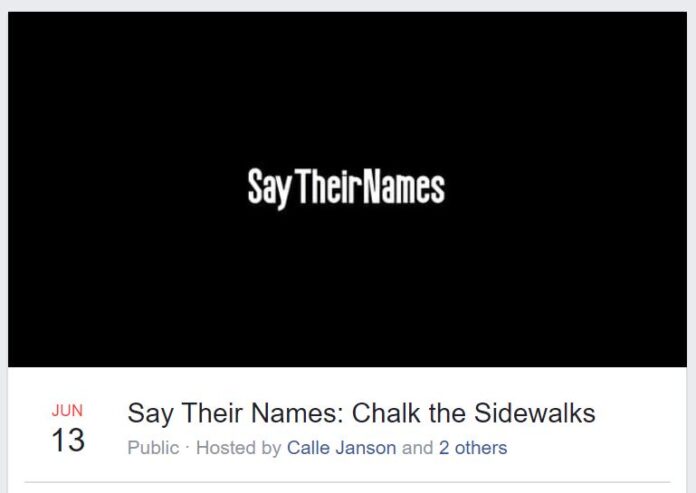 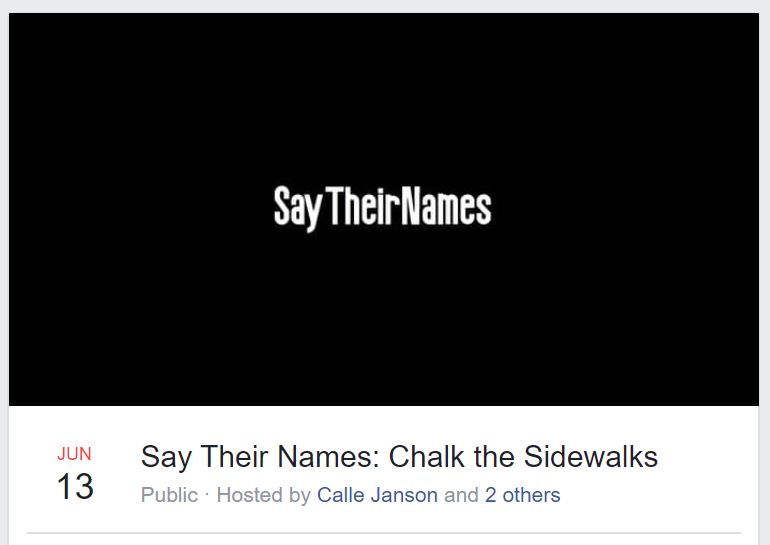 Say Their Names: Chalk the Sidewalks is coming to New Albany on June 13.

SoIN is taking a stand by saying the names of those violently killed by systemic oppression and racism. We will be meeting in the downtown areas of both New Albany and Jeffersonville to write the names of those killed as a reminder that we must not be silent and we must say their names. If you are unable to join us for the group event, please participate at your own home as you can. Chalk your sidewalks or driveways with their names.

We will not and must not be silent any longer.

For the New Albany location, we will meet at the corner of Spring and Pearl near the Bicentennial Park.

For the Jeffersonville location, we will meet at the base of the Big Four Bridge.

Good. It’s about time for an awakening.

I think it’s impressive and commendable that four of the five members of New Albany’s Human Rights Commission (HRC)* are displaying admirable social conscience during these potentially transformational times.

Calle Janson (an organizer of Say Their Names), Paul Kiger, Jennifer Ortiz and Ken Brooks all can be viewed on their Facebook pages referencing Black Lives Matter and advocating … well, for HUMAN RIGHTS. After all, it’s why the commission is there, right?

The fifth member of the HRC is Warren Nash, whose public utterances recently have been confined to the usual semi-comprehensible partisan political sycophancy — for the Democratic Party as well as the municipal administration for which he specializes in backroom fixes, envelope shuttling and the occasion snarl directed against modernity.

Sadly, it’s easy to imagine Nash bringing the sidewalk chalking to the Board of Works and Safety for approval and deep editing.

The party itself has had almost nothing to say about events in America for the past two weeks. Neither has Gahan, nor any of the mayor’s team. I cannot locate an example of an elected Democratic Party office holder in New Albany making a public utterance about social justice, BLM or any other topic that has dominated the national discourse recently.

They just dig deeper and deeper into the Down Low Bunker.

You’d think maybe councilman Greg Phipps would show signs of a pulse, given that he fancies himself the enabler of the HRC — which has been crippled and hamstrung since its inception (and two re-inceptions) by the very same Democratic Party that enjoys taking credit for the commission just as long as it isn’t visible.

To repeat: The Democratic Party controls New Albany. It is a profoundly propaganda-tainted conservative institution — as I refer to it without a shred of satiric exaggeration as the DemoDisneyDixiecratic Party — albeit with a good number of progressive-leaning individuals residing inside the party’s ideological tent, who for whatever reason constantly defer to the Gahan/Nash elder regressive faction that amply keeps the pay-to-play wheels greased, but possess all the social conscience of a lump of clay.

Consequently, Black Lives Matter probably will come to Birdseye before it arrives at Hauss Square. Local Democrats are absolutely terrified of BLM — not because of what IT is, but who THEY are … and aren’t.