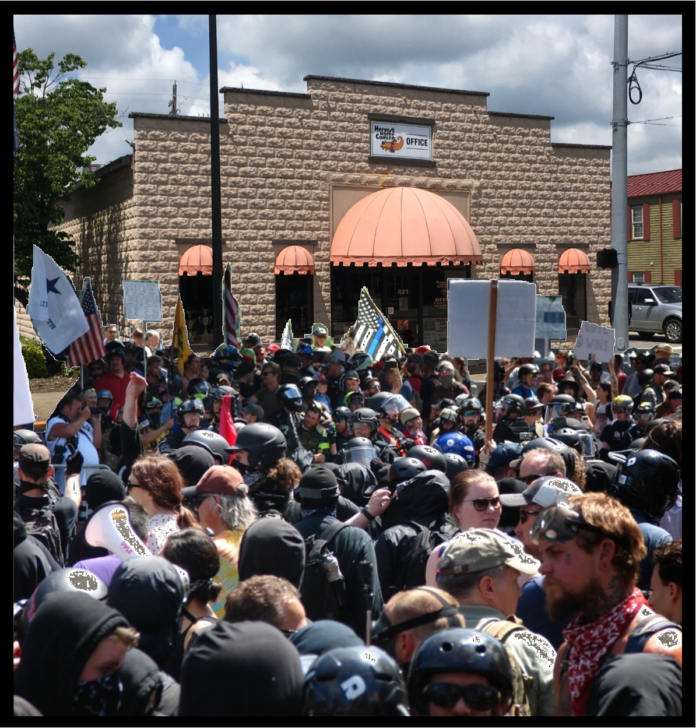 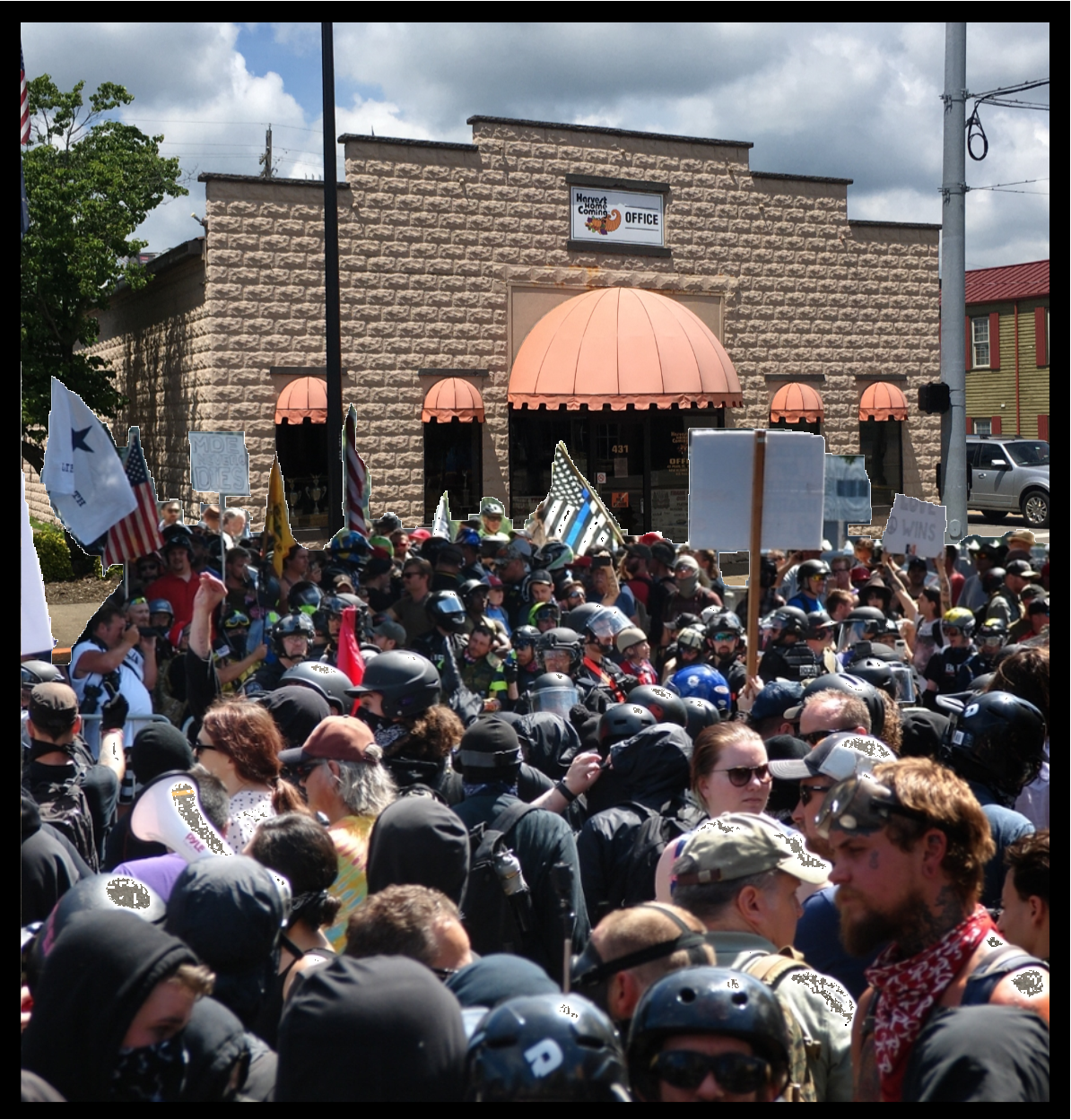 Who ever thought that forty years of narrow selfish leadership of academic, corporate, and political institutions would lead to a population full of raw anger?
— Matt Stoller

This wasn’t sufficiently violent to suit President D. “Nero” Trump, who proposed using armed service regulars to attack American citizens and occupy their cities — not unlike the Chinese did in Tiananmen Square in 1989, or the United States in Iraq 17 years ago.

Meanwhile in excess of 100,000 Americans have died from a mysterious novel virus, with the number of infections reaching upwards of 2,000,000. Between 30 and 40 million are unemployed, and taking these statistics into consideration over a meal of Oliver Garden takeaway and hard seltzer, perhaps another 150 million of us have concluded (a) the virus doesn’t exist, or (b) if it does, it’s perfectly safe because FREEDOM, and (c) in any event the virus that is, or perhaps isn’t, was devised by pussy libtards in cahoots with the Chinese for use against OUR president, and this is why (d) blacks protesting perennial injustice should be crushed with surplus army gear, but whites objecting to science, protesting any semblance of justice for non-whites or failing the physical when attempting to join the local SWAT team must carry their own powerful armaments and weaponry anywhere they please as “penis proxies.”

Our Big Mac president recently embraced the aforementioned counter-insurgency techniques to have the way cleared for a photo-op at a church, holding a hastily borrowed Bible aloft, upside down, in his best choreographed attempt to appear engaged.

The same half of the population that has rejected science because STOCK MARKET GODDAMMIT applauded vigorously, pausing only to blame blacks for their own targeting by the militarized police.

Amid the bleating and babbling of those shaven-headed old white guys with sour expressions whose monster trucks now routinely travel 50 mph down Spring Street, safe in the knowledge that our own municipal enforcement mechanisms remain in hibernation deep within Jeff Gahan’s agoraphobic “pretend leader” bunker, I’ve spent the past few days wondering about the precise level of violent injustice required to bring forever snoozing New Albanians out into the streets to protest.

Now I know the answer: cancel Harvest Homecoming and watch as the yokels finally are stirred to action.

The Harvest Homecoming cancellation announcement came Wednesday evening from the organization’s governing committee. Apparently the officers embraced rationality in consideration of a plain fact grasped by virtually anyone who has ever attended the festival, this being that almost every aspect of the event’s success relies on a high volume of humans, not a few of them drunk, all of them eating, squeezed into relatively small areas of streetscape.

Most of the time this business plan works out as intended. However, 2020 emphatically is not “most of the time.” The committee rightly fed the facts into the public health calculator of spacing and hygiene necessary to contain the pandemic, crunched the numbers, and found — alas — that 2 + 2 still equals 4.

Harvest Homecoming will return in 2021, by which time the global health situation probably (although not necessarily “will”) be clearer. Caution? It’s the most balanced attitude toward unknown factors, and something not to be confused with fear.

Of course, as FDR reminded us, we have nothing to fear except being deprived of amenities and diversions guaranteed to us by the United States Constitution … or the Board of Public Works and Safety, at the very least.

Within seconds of the meeting’s final gavel, howls of Internet fury arose from the troll-in-the-mirror narcissists, who figuratively descended on Harvest Homecoming with eggs, toilet paper and so very much mangled syntax.

Seeing as I’m a connoisseur of humanity’s limitless capacity for illogical behavior, I risked the rhetorical rubber bullets cascading into a group of innocent bystanders (namely, Harvest Homecoming’s volunteer workers, who don’t deserve the abuse heaped on them by hordes of sheer dullards), strapped myself into several layers of PPE and dove into the social media scrum, only to be deafened by what sounded like hundreds, perhaps thousands of indignant, starving crows.

You might say it was “enchanting.” Here are several examples.

ML (works at Humana): This is so overblown at this point.

BNB (hospital worker): So you can have thousands of people go protest but we can’t have harvest???

WJ: maybe , you should have asked the people of New Albany about the cancellation of the harvest homecoming. before doing it. let us decide if , we want to take the chance or not.

MD (says he’s a University of Louisville graduate): This is dumb why not wait and see if this thing goes away! Cases she almost gone to zero!

TC: Man. Watch the downtown New Albany business district go belly up now. This was a BIG MONEY deal to a lot of businesses.

What in the name of rolled oysters, elephant ears and frozen chocolate covered bananas is the matter with you people?

I never thought I’d be defending the decision-making of the Harvest Homecoming committee, with which I’ve often differed, but it isn’t hard to put yourself in their shoes. Most of Harvest Homecoming’s governing committee members and volunteers are multi-generational lifers. Love the festival or hate it, they work throughout the year in preparation, and take their tasks very seriously.

This decision to cancel Harvest Homecoming in 2020 almost surely was the hardest thing these folks have ever had to do outside the heavy issues we all face in own personal lives. It’s mind-boggling to accuse them of taking their responsibilities lightly. This whole process must have been traumatic for them.

Did any of you think of THAT?

Here YOU are, masquerading as a “fan” of Harvest Homecoming until the going gets choppy and your field of vision narrows to the chief malady of our nation, in big-ass block letters: ME ME ME ME ME ME ME.

The Harvest Homecoming committee is being responsible and looking to the festival’s long-term prospects. That’s savvy. Not everyone hereabouts rejects science, and it’s really hard to imagine big crowds turning out his year. If the committee goes fast, some of the throng will be back this year. If it goes slow, probably most of them will return in 2021.

To be fair, we’ve also heard from non-profit organizations as well as for-profit vendors, for whom Harvest Homecoming is a primary annual revenue source. There’ll be pain, just as there has been for the food and drink business. Losing St. Patrick’s Day wasn’t exactly enjoyable, nor being closed entirely or operating for more than two months on far less than 50% of customary sales volume.

It’s what had to be done for the greater good. As with the pandemic writ large, perhaps the pain will lead to fresher thinking. Is there anything that can be done a little bit each day of the year to offset the risk of depending on just one week?

Must we go to the office five days a week, or can we work from home for three?

Is it really necessary for you to spit in my face while extolling the selfless virtues of The Donald?

As for the experts, well, if you’ve never been charged with thinking past the distance to where your car is parked, or planning activities for a few hundred thousand of your closest friends as opposed to heading down to the stop ‘n’ rob for a Big Gulp or three, then you may wish to get a life.

I’m told you can buy one at Amazon, although be forewarned.

The life you buy for yourself might be manufactured in China — and then what?

May 21: ON THE AVENUES: Godlessness in defense of heathens, infidels, idolaters, atheists, non-theists, irreligious people, agnostics, skeptics, heretics and apostates.

May 7: ON THE AVENUES: COVID tolls for thee — whatever, so hurry and get your ass back into this seat.