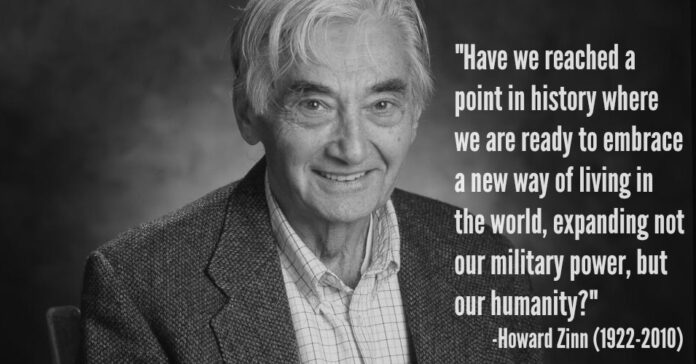 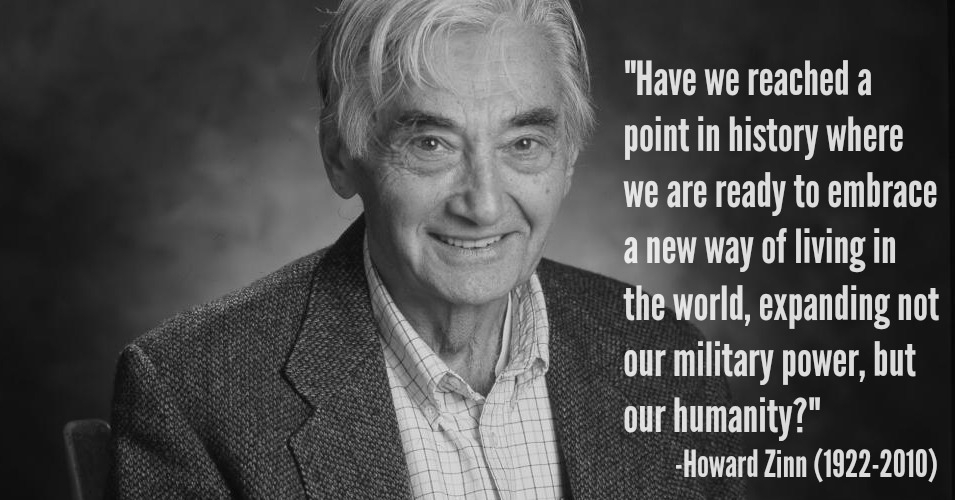 “No politician who voted funds for war, no business contractor for the military, no general who ordered young men into battle, no FBI man who spied on anti-war activities, should be invited to public ceremonies on this sacred day. Let the dead of past wars be honored. Let those who live pledge themselves never to embark on mass slaughter again.”
— Howard Zinn

To me, the most disrespectful act that might be directed against the fallen from past wars, or the veterans still among us, is to accept self-censorship as it pertains to discussing the honest, real-world reasons why these conflicts occurred. There’s no “either-or” fallacy stipulating that we all fall into line, or else be considered traitors.

Memorialize, and never stop asking questions, even when the answers are unpleasant. Some day we might learn. If we tolerate silence, then our children obviously will be next. If we tolerate war, pestilence and mayhem, then a little Zinn is good for whatever remains of our souls

Whom Will We Honor Memorial Day?, by Howard Zinn

Published on June 2, 1976 in the Boston Globe and republished in The Zinn Reader with the brief introduction below.

Memorial Day will be celebrated … by the usual betrayal of the dead, by the hypocritical patriotism of the politicians and contractors preparing for more wars, more graves to receive more flowers on future Memorial Days. The memory of the dead deserves a different dedication. To peace, to defiance of governments.

In 1974, I was invited by Tom Winship, the editor of the Boston Globe, who had been bold enough in 1971 to print part of the top secret Pentagon Papers on the history of the Vietnam War, to write a bi-weekly column for the op-ed page of the newspaper. I did that for about a year and a half. The column below appeared June 2, 1976, in connection with that year’s Memorial Day. After it appeared, my column was cancelled.

Memorial Day will be celebrated as usual, by high-speed collisions of automobiles and bodies strewn on highways and the sound of ambulance sirens throughout the land.

It will also be celebrated by the display of flags, the sound of bugles and drums, by parades and speeches and unthinking applause.

It will be celebrated by giant corporations, which make guns, bombs, fighter planes, aircraft carriers and an endless assortment of military junk and which await the $100 billion in contracts to be approved soon by Congress and the President.

There was a young woman in New Hampshire who refused to allow her husband, killed in Vietnam, to be given a military burial. She rejected the hollow ceremony ordered by those who sent him and 50,000 others to their deaths. Her courage should be cherished on Memorial Day. There were the B52 pilots who refused to fly those last vicious raids of Nixon’s and Kissinger’s war. Have any of the great universities, so quick to give honorary degrees to God-knows-whom, thought to honor those men at this Commencement time, on this Memorial Day?

No politician who voted funds for war, no business contractor for the military, no general who ordered young men into battle, no FBI man who spied on anti-war activities, should be invited to public ceremonies on this sacred day. Let the dead of past wars be honored. Let those who live pledge themselves never to embark on mass slaughter again.

“The shell had his number on it. The blood ran into the ground…Where his chest ought to have been they pinned the Congressional Medal, the DSC, the Medaille Militaire, the Belgian Croix de Guerre, the Italian gold medal, The Vitutea Militara sent by Queen Marie of Rumania. All the Washingtonians brought flowers .. Woodrow Wilson brought a bouquet of poppies.”

Those are the concluding lines of John Dos Passos angry novel 1919. Let us honor him on Memorial Day.

And also Thoreau, who went to jail to protest the Mexican War.

And Mark Twain, who denounced our war against the Filipinos at the turn of the century.

And I.F. Stone, who virtually alone among newspaper editors exposed the fraud and brutality of the Korean War.

Let us honor Martin Luther King, who refused the enticements of the White House, and the cautions of associates, and thundered against the war in Vietnam.

Memorial Day should be a day for putting flowers on graves and planting trees. Also, for destroying the weapons of death that endanger us more than they protect us, that waste our resources and threaten our children and grandchildren.

On Memorial Day we should take note that, in the name of “defense,” our taxes have been used to spend a quarter of a billion dollars on a helicopter assault ship called “the biggest floating lemon,” which was accepted by the Navy although it had over 2,000 major defects at the time of its trial cruise.

Meanwhile, there is such a shortage of housing that millions live in dilapidated sections of our cities and millions more are forced to pay high rents or high interest rates on their mortgages. There’s 90 billion for the B1 bomber, but people don’t have money to pay hospital bills.

We must be practical, say those whose practicality has consisted of a war every generation. We mustn’t deplete our defenses. Say those who have depleted our youth, stolen our resources. In the end, it is living people, not corpses, creative energy, not destructive rage, which are our only real defense, not just against other governments trying to kill us, but against our own, also trying to kill us.

Let us not set out, this Memorial Day, on the same old drunken ride to death.

And as an epilogue of sorts.

Memorial Day is a day noted for its parades honoring veterans by ennobling, glorifying (and thereby perpetuating) US war and militarism. The peace community in Rochester observes instead a solemn riverside service memorializing the thousands of victims of current US war and aggression, with each victim symbolized by a single rose tossed lovingly into the river’s flow.

Victims memorialized include the casualties of US sanctioned war and aggression, from Afghanistan and Iraq to Syria to Yemen to Somalia to South Sudan to Palestine. Also the many innocent victims of drone attacks, inhumane US immigration and incarceration policies, militarization of the police, and preventable gun violence. And the worldwide victims of catastrophic climate change, fed by US policies of denial and consumption. And an entire global population victimized by the threat of nuclear Armageddon triggered by senseless US provocations of Iran, North Korea, Russia, China.

There would not be enough roses to identify and honor even the tiniest sample of the the thousands of innocent victims lost to aggressive US policies. Such roses could easily choke the Genesee River in sorrow. Yet remembrance, however heartfelt, is still insufficient. After all, in his Gettysburg memorial address, Abraham Lincoln noted the futility of consecrating the war dead without rectifying the war’s cause: “It is for us the living to be dedicated to the unfinished work … so that these dead shall not have died in vain.” What, then, might move us toward peace, a peace threatened, most of all, by our own government’s unrelenting appetite for war?