Until someone proves me wrong, I’m operating under the assumption that I am New Albany’s most famous atheist.

Thank you; thank you very much. As absolutely nothing is my witness, this content will remain free and I’ll not be asking you for money.

I’ve never been shy about it.

I try to be who I am, all of the time, publicly and privately. In part, this is to offer explicit support and solidarity with those who feel they cannot openly embrace their absence of religious belief. In my case, this absence has been lifelong. Once I was in grade school, the concept of “god” stopped making sense to me.

However, being an atheist should not matter, and it does not matter — except, of course, when it does, as yesterday when the forever culpable News and Buffoon emitted this tweet. 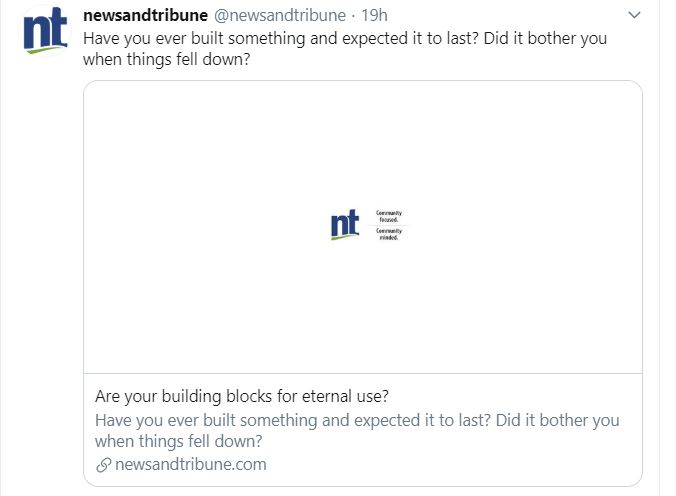 Nothing identifies this link as “opinion,” which it most certainly is, as emitting from the prolific evangelical pen of Tom May, who is published so often at this propaganda portal that he surely must possess compromising photos of the publisher reading a book other than the bible.

This and other recent social media utterances serve to remind me that there are occasions during the course of my always eventful existence in Nawbany when otherwise inexplicable behavior on the part of others can be explained only by their disapproval of my atheistic proclivities.

I might go into greater detail, but it’s unnecessary. I’m fairly certain that opportunities have gone by the wayside owing to these instances of disapproval. But also know that no sleep has been lost over them; I’m a contrarian, and a combative and defiant sort. Of course, maybe atheism has nothing to do with it, and they merely dislike the way I roll.

A slim chance, although a chance nonetheless.

All I can do is shrug. Consider today’s words to be philosophical musings, nothing more. It wouldn’t be the first time that honesty raised hackles or inspired push-back.

Following is a letter I wrote to the underachieving Jeffersonville newspaper in 2017.

Figures vary, but nine of ten Americans might believe in God. At least that’s what they say when asked. Many of these believers are Christian.

If another recent study is accurate, 69% of view a belief in God as necessary to be a genuine American.

This is highly disconcerting. Throughout history, atheists have been subject to criticism, persecution and at times overt eradication at the hands of believers of all faiths.

At the very least, atheists often experience a more subtle form of bigotry. For instance, a survey showed more than 30% of respondents preferring atheists be banned from the teaching profession.

Insecurity, intolerance and outright humbuggery always have been regrettable components of human society, and while majoritarian disapproval of atheism isn’t (yet) comparable to racism, sexism and other forms of institutionalized violence, it represents a form of discrimination characterized by ignorance, and one deserving of periodic counterpoint.

The News and Tribune sees fit to publish not one, but two Christian advocacy columns on a weekly basis. When I made my dismay known in a social media comment, I was told by a reporter that this makes perfect sense because many readers are Christians.

Interestingly, research published in the archive of the Society for the Improvement of Psychological Science suggests that more Americans (and newspaper readers) are atheists than may seem apparent, perhaps as many as 25 – 30%.

That’s because the stigma of atheism, as perpetuated by believers, causes many atheists to pretend they’re pious.

Some particularly virulent true believers don’t like heretics even when they’re properly cooked – and indeed, we unbelievers have been fire-roasted oft times throughout history. It’s mighty totalitarian in nature, this stubborn unwillingness on the part of so many “godly” people to compromise on questions that have tended to result in them directing violence against others in the name of their own unknowable deity.

Then again, I’m just one of those contrarian communistic freethinking threats to human decency … and damned proud of it.

Certainly I’m not the first person to place a tattered bookmark in my cherished copy of Christopher Hitchens’ God Is Not Great: How Religion Poisons Everything, make an espresso, and proceed to the computer to search for images of Francisco Goya’s “Los Caprichos” series of 18th-century etchings.

That’s because in Chapter 14, Hitchens specifically refers to Plate 43 of Goya’s series. It is called “The Sleep of Reason Produces Monsters,” and shows a “man in defenseless slumber … hag-ridden by bats, owls and other haunters of the darkness.” 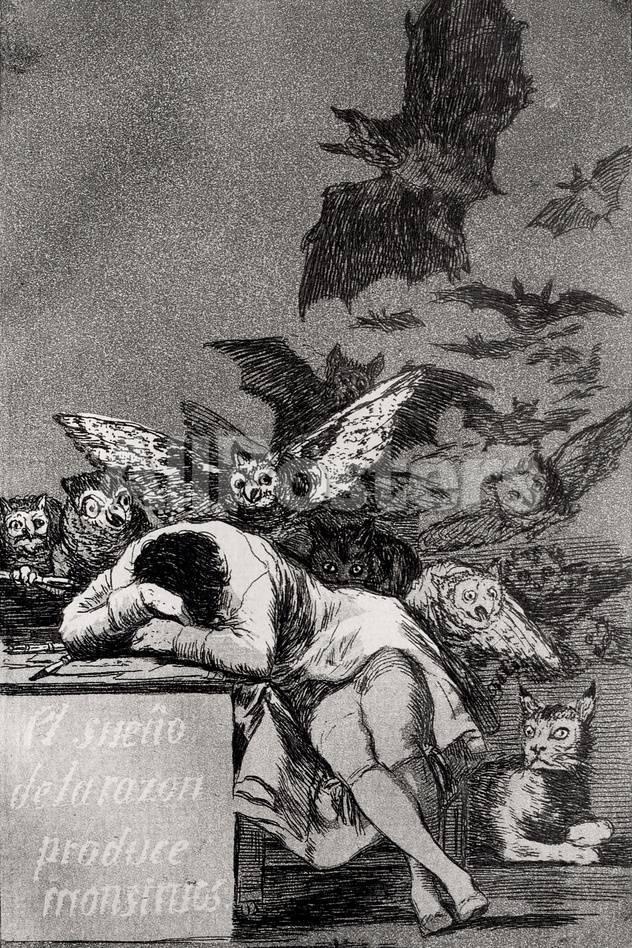 The author’s actual point in citing this effective visual aid is to take a view contrary the etching’s originally intended symbolic properties, namely, to offer that human reason always is the subject of fear and distrust when viewed through the distorted lens of man’s religious impulse, and that human reason has been derided accordingly throughout mankind’s damaging religious experience.

Damaging? Of course. Just ask the aforementioned “heretic” who was burned for believing what science in due time came to confirm.

One aspect of my upbringing for which I’m eternally grateful was the near complete absence of religious instruction. There was an old book in the house about the lives of the saints, and it included some fairly frightening scary drawings depicting the various ways that these saints were tortured and scourged, though they were not to Goya’s level of artistic proficiency.

I recall another volume of illustrated children’s Bible stories, and of course a Bible itself, presumably awarded my parents on their wedding day, and duly ignored by my parents forever after.

Beyond these three seldom consulted sources, there was nothing else on the topic of religion forced upon me, and I was permitted to grow to maturity with the luxury of making up my own mind, absent indoctrination.

Bertrand Russell is equally famous for refuting this wager by positing that if, after he died, he unexpectedly met a god of one sort or another, he would chide the “supreme being” for providing insufficient evidence of her existence.

Hitchens follows suit by stating his own version of Russell’s words.

My own reply: Imponderable Sir, I presume from some if not all of your many reputations that you might prefer honest and convinced unbelief to the hypocritical and self-interested affectation of faith or the smoking tributes of bloody altars. But I would not count on it.

I wouldn’t, either. It’s interesting to me that in some measure, Goya was right, and my own personal demons spring from my reliance on reason. But that’s encouraging, because it means that reason, properly applied, can scatter and dispel them.

There is no other choice, is there? Here is an excerpt from Hitchens as he summarizes his case.

Religion has run out of justifications. Thanks to the telescope and the microscope, it no longer offers an explanation of anything important. Where once it used to be able, by its total command of a worldview, to prevent the emergence of rivals, it can now only impede and retard – or try to turn back – the measurable advances that we have made. Sometimes, true, it will artfully concede them. But this is to offer itself the choice between irrelevance and obstruction, impotence or outright reaction, and, given this choice, it is programmed to select the worse of the two.

We’re seeing this all too clearly in pandemic times, aren’t we?

As a postscript, let’s go back to the local chain newspaper’s predominately older white male cast of (in some cases decades ensconced) opinion piece authors. I have no desire to be listed among them again, primarily because I suspect the pay scale is even more abysmal than it was back in 2009 – 2011.

However, strictly as a matter of principle, it’s worth repeating that there really should be a weekly column counterpoint to Bill Hanson’s thinly-veiled proselytizing — and weekly, Susan, just like Tom May’s evangelism is, not “you can write a letter to the editor any time you like.”

In my experience, atheists generally just want to be left alone, and prefer that religious belief remain a matter of private conscience and not a public policy lever.

It’s funny how so many religions make public show of private conscience. Whatever. It’s a pandemic holy-holi-day, and this atheist has penitent drinking to do.

May 7: ON THE AVENUES: COVID tolls for thee — whatever, so hurry and get your ass back into this seat.

April 30: ON THE AVENUES: A week that was wooden like Pinocchio and dry as an unused water park or an unfilled glass.

April 23: ON THE AVENUES: Hemingway in a time of mercifully silent thunder.