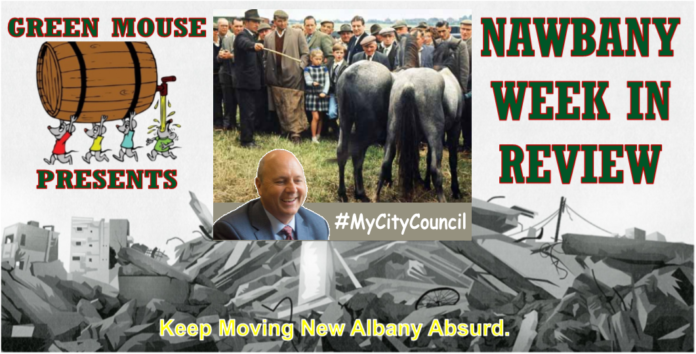 The more things change, the more they stay precisely the same. It’s not a coincidence, you know.

We’ll get there in a moment. First, be aware that the Green Mouse is fond of the word kakistocracy.

Government by the least suitable or competent citizens of a state.

A state or society governed by its least suitable or competent citizens.

It’s a ruling clique of cronies, most prominently Jeff Gahan, Warren Nash, Adam Dickey, David Duggins and Shane Gibson. Josh Staten suffers a degree of cognitive dissonance because deep down he knows better, but being redevelopment chief implies a foot on the middle rung of the ladder. Todd Bailey, the chief of police? Yes, so long as he remains pliant and allows those streets to remain safe for automobiles.

Bob Caesar believes he’s in the clique, although the good old boys just laugh at Bobby behind his back. Jason Applegate desperately wants to be part of the fun; for reasons that have little to do with his qualifications, the clique is willing to use him. That’s why Applegate spearheaded Thursday’s assault on the homeless (below).

The New Gahanian kakistocracy is all male, all white and all bound up with pay-to play monetization via the mayor’s band of campaign donors — but we already knew that.

A few weeks ago Allen Howie’s Idealogy newsletter inadvertently addressed the fundamental problem with the kakistocratic clique’s unpreparedness to deal with our new realities.

World War Z, the Tenth Man and You


In the 2013 Brad Pitt film, World War Z, a deadly virus washes over the globe unchecked, turning millions into zombies. But one place remains a safe harbor: Jerusalem, which managed to erect high walls around its perimeter before the outbreak reached the city.


Pitt’s character asks one of the city’s top officials how they were able to respond in time. He replies that they overheard communication from a small country about “zombies.” Why would you even pay attention to something so ludicrous, Pitt wonders.


The official then tells him about the tenth man, an idea created in the tragic wake of the Holocaust, the Munich Olympics and the Yom Kippur war — all events his nation’s leaders believed were impossible until they happened.


“If nine of us with the same information arrive at the same conclusion, it’s the duty of the tenth man to disagree,” he said. “No matter how improbable it may seem, the tenth man has to start thinking with the assumption that the other nine are wrong.”


What does all this have to with your company?


When you consider threats or opportunities, it’s often as a group. And what emerges is consensus — you act on the challenges or possibilities everyone can agree on. Outliers get voted off the island.


But a group can be wrong. A lone voice can be right. And in business, the greatest successes go to the contrarians. The early adopters. Those who question the assumptions.


So whether you’re thinking about an updated business model for this new normal, rethinking your marketing and messaging, or revisiting your product and service options, consider designating a tenth man.


Of course, the tenth man may be a woman. They could be (and maybe should be) someone from outside daily operations. Maybe even someone from outside your industry. They need to be someone who can speak freely without repercussions. Someone you’ll listen to. And someone with experience in thinking differently.


You’re as unlikely to have to deal with zombies as you are to hang with Brad Pitt. But every business would be better prepared for a rapidly-changing future if it embraced the idea of the tenth man. Who’s yours?

That’s the whole point, because there isn’t one, and there cannot be.

As we’ve observed for years, membership in the clique is based primarily on one abiding qualification, that Dear Leader’s narcissistic genius is not questioned. It’s intellectual inbreeding, and outside blood need not apply.

It’s why the crisis of the pandemic is tantamount to Toto pulling back the Wizard’s curtain; the coronavirus simply cannot be mollified with a $100,000 HWC Engineering study. COVID’s ripple effect will expose municipal government’s conceptual nudity, and it won’t be a pretty sight.

Our kakistocrats don’t know how to do their business if it’s not business as usual. Grasping for straws, looking for something or someone to blame, they found an easy target.

Same as it ever was: the homeless.

The vote was 6-3, with council members Al Knable, Scott Blair and Josh Turner supporting the request.

Those opposed to the measure cited their beliefs that not enough funding is going directly to programming for homeless residents after they enter the shelter, and that the New Albany Trustee’s office is already providing many of the services that Catalyst offers.

Councilman Jason Applegate said that in reviewing the financial information provided by Catalyst Executive Director Jim Moon, only about $2,700 of the $50,000 would have gone to programming and food.

“I couldn’t get over where it was such a small percent of this money that goes to the programs that help people,” he said.

Can we be honest, just for a moment?

A garden-variety space alien beamed down to observe politics in Nawbany would require no more than ten minutes to grok this situation.

First, our DemoDisneyDixiecrats HAVE ALWAYS been hostile to funding requests pertaining to the homeless.

Second, Republicans were in favor of the Catalyst funding (well, except the perpetually befuddled David Aebersold), thus dooming it, given a pliant, boot-licking DemoDisneyDixiecratic majority.

I suppose we’ll see an editorial in Extol Magazine spinning the vote.