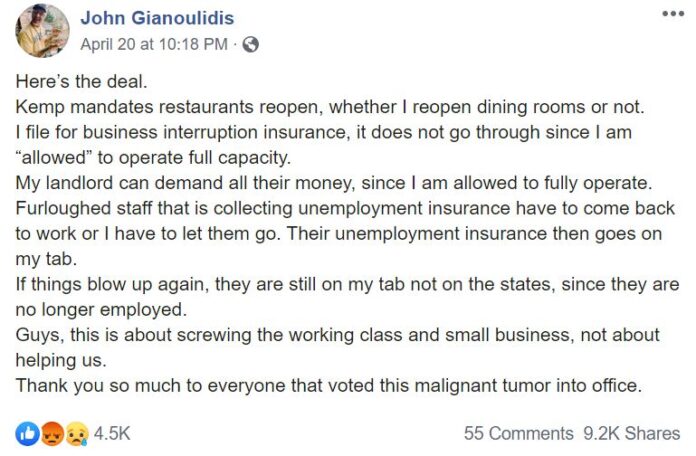 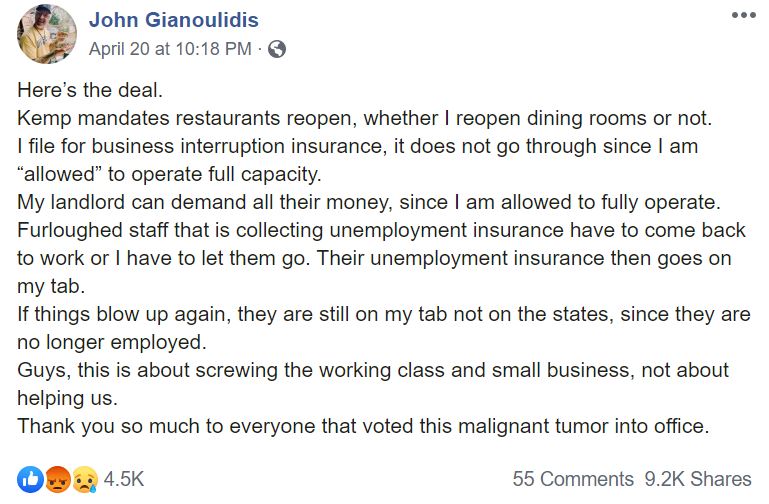 Who is John Gianoulidis? At Mother Jones, Maddie Oatman tells us: Reopening a Restaurant Will Take a Lot More Than a Governor’s Order.

For the last five years, John Gianoulidis satisfied Atlanta-area residents’ craving for Greek food with gyros and baklava from his two diners, both called Kafenio, and a coffee shop. As paralysis from the coronavirus took hold last month, he made the tough decision to shut down one of the diners, which catered heavily to now-furloughed Delta Airlines employees, and laid off 14 employees from all the locations. He turned another location into a counter-service-only affair, and is now working seven days a week at both the diner and the coffee shop. Though he’s seen some demand for takeout meals, business has dropped off dramatically. “I’m just keeping my head above water,” he says.

But Georgia Governor Brian Kemp’s announcement on April 20 that certain businesses in the state, including restaurants with dine-in service, would be allowed to reopen at the end of the month—and that no local ordinances can prevent them from doing so—did nothing to assuage Gianoulidis’ angst.

Kemp, backed by new guidelines released by President Donald Trump for reopening the economy, framed his decision as an effort to “get Americans back to work.” But as far as Gianoulidis was concerned, Kemp’s policy was just a way to shift the burden of the virus from the state back onto people like him. “Guys, this is about screwing the working class and small business,” he posted on Facebook that night, “not about helping us.”

Kemp mandates restaurants reopen, whether I reopen dining rooms or not.

I file for business interruption insurance, it does not go through since I am “allowed” to operate full capacity.

My landlord can demand all their money, since I am allowed to fully operate.

If things blow up again, they are still on my tab not on the states, since they are no longer employed.

Guys, this is about screwing the working class and small business, not about helping us.

Thank you so much to everyone that voted this malignant tumor into office.

Before you don your camo and march off to protest scientific reality, take a moment and read the piece at Mother Jones. There remains a distant possibility you might learn something. The closing paragraph is striking.

Gianoulidis doesn’t feel ready to follow suit. When he does, he imagines he’ll pull half of his tables and make sure to continue asking himself: “Have I served the public in good conscience?” He thinks often of his parents, Greek immigrants who emigrated to New England in 1963. They “worked their tails off” in factories to save up enough to open a little pizza joint in Connecticut. Their story reminds him to keep moving forward right now. And if things in Georgia continue to unravel, he says, “Thankfully, I also have Greek citizenship.”