This is what happens when you realize (a) the draft of your weekly column isn’t writing itself, and (b) the Green Mouse already has 900 words for the weekly Nawbany news wrap. 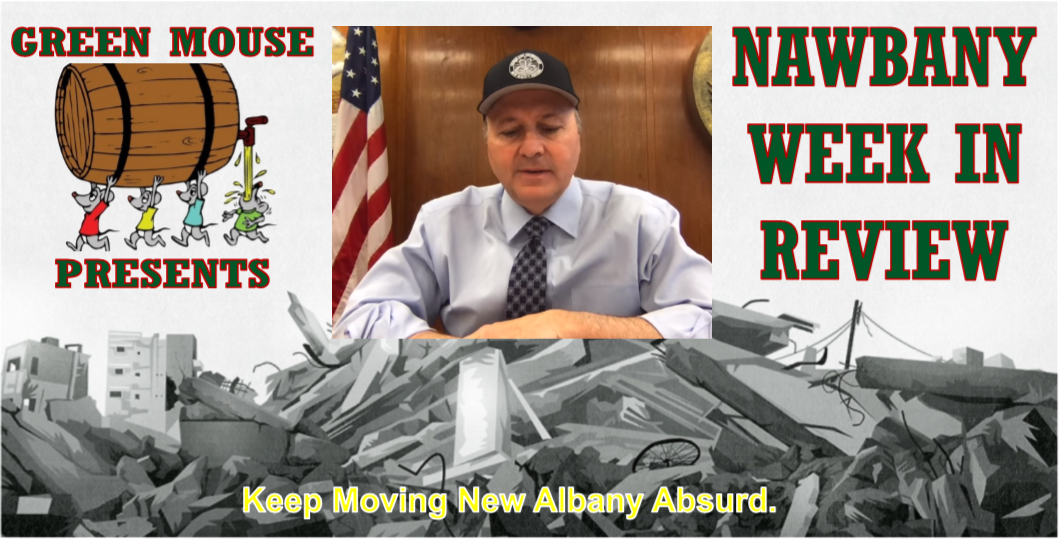 Besides, I’ve mostly stuck to my pledge to refrain from telling the truth about local affairs, a task made easier by the pandemic-borne restrictions and the general weirdness following in their wake. It’s time to loosen up a little, a la Holcomb.

Consequently, this week ON THE AVENUES and GREEN MOUSE presents NAWBANY WEEK IN REVIEW have merged.

And what a wild damn week this proved to be.

Friday afternoon Governor Eric Holcomb chose the international May Day celebration to announce a five-stage plan to reopen Indiana almost entirely by July 4 — probably a coincidence, that national holiday of a date. There are so many moving parts to it that the Green Mouse prefers to return at a later date and explain … once the drugs have worn off.

On Thursday, as ever wishing to appear like he’s socking it to those nasty Republicans, Mayor Jeff Gahan released one of his patented, socially distant videos — because when you’re agoraphobic, your whole life has been about keeping others as far away as possible.

Except that in this video, Gahan failed utterly to find his footing.

The upbeat ebullience and jingoism no longer comes naturally. He can still come out with the same words, but he can no longer even bring himself to believe them. For the first time in his life, there are signs of self-doubt. When he looks in the mirror, he now sees his reflection beginning to fragment. His persona that has been carefully constructed over 55 years to protect himself from the pain of being himself is falling apart. Yet still he can’t quite access the humility that might go some way to healing himself.

Okay, so the preceding passage was lifted word for word from The Guardian, speaking not of Gahan, but Prime Minister Boris Johnson. However, the parallels are both instructive and striking.

With nothing whatever to do for six weeks since pandemic curve-flattening measures were imposed — just about all of the responses have come from GOP-controlled county, state and federal governments — the congenitally bunker-bound mayor seemed wooden, listless and uninspiring. 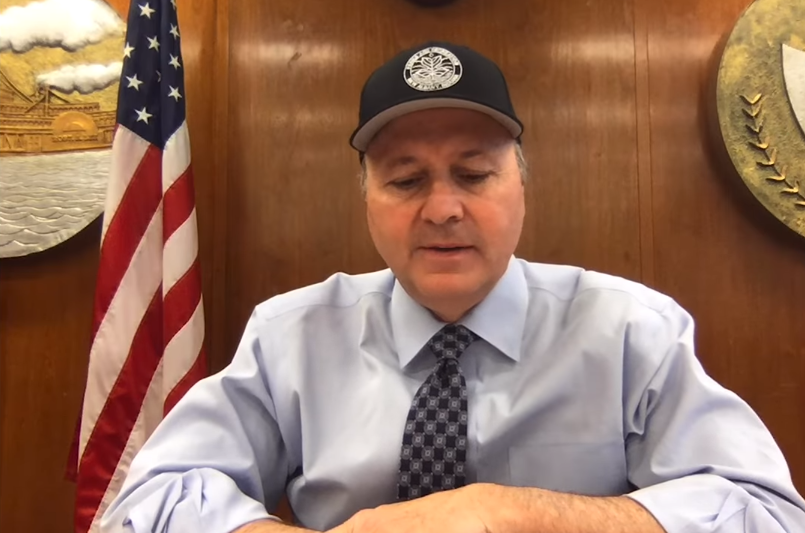 The font on his cheat sheet may have been too small. He also seemed distracted and sad, as if in mourning.

What about the odd ball cap — can you make it out? 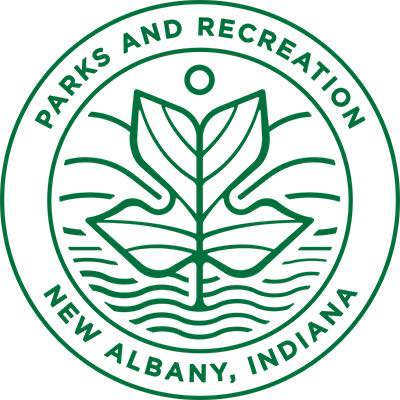 Yep, it’s a municipal parks and recreation logo, right there on Gahan’s pate covering, but why this of all things?

In the current time, shouldn’t it be an ambulance driver’s emblem, or a first responder’s or hospital nurse’s?

Ever since 9-11, when every politician started popping up dressed like firemen and cops, symbolism like this is carefully scripted — and we already know that Gahan can’t so much as take out the trash without post-it notes.

The answer, of course, is that the mayor surely is mourning.

At a time when numerous townspeople are suffering, jobs have been lost, social inequalities exposed and the groundwork laid for pervasive revolution, the primary reason for Gahan’s video Thursday was to inform his adoring public (cue the somber violins) that there cannot possibly be a season this summer for the River Run Family Water Park, our glorious aquatic center.

Fabric is torn and teeth ground together. The coronavirus dunnit, ya know.

Goat herders in Kosovo understand that the parks and recreation department is Gahan’s baby, with a budget that went in a very few years from zero to somewhere around $3 million. Right now, with these park units mostly closed and the majority of functions suspended by the pandemic, the mayor’s baby is under siege.

Not a word in six weeks about the homeless, the hungry or the vulnerable. But there’s a video lamenting the enforced absence of a three-month water sports calendar at a catastrophically expensive facility built to cater to the better-off among us.

Bizarrely, seeing as River Run has hemorrhaged tax dollars since inception, even in the best of climate-altered Ohio Valley heat waves, keeping it closed and eliminating operating expenses might actually save the city money in 2020, even if we continue making the bond payments (assuming the city has the spare change lying around to do so).

We shouldn’t assume that. At last Gahan faces a crisis, and if he somehow bluffs his way through the pandemic, there’s the Sherman Minton idiocy coming next year.

I thought occurrred to me, and I did a Google search: When was the last news item in which “HWC Engineering” and “New Albany Indiana” both appeared?

You’ll really love this: it was in the Seymour Tribune in December, 2019.

After 12 years as mayor of Seymour, Craig Luedeman will embark on a new career in 2020.

Luedeman, 43, has been hired by HWC Engineering in Indianapolis. He will serve as a community business development manager for the firm beginning Jan. 6.

HWC is a full-service planning and infrastructure design firm with offices in Terre Haute, New Albany, Lafayette and Muncie. Although he will be based out of the Indianapolis office, he’ll be working remotely from his home, too, and will have to travel a lot, he said.

“Basically, I’ll be going to cities and counties and communities and trying to help them with getting grants and any kind of business development HWC does as far as transportation, bridges, wastewater, stormwater, all those areas and design services,” he said.

He will meet with mayors and other leaders across the state to discuss projects they may have and how HWC can assist with getting those projects accomplished.

Wondering what Slick Jeffie would be doing now if David White or Mark Seabrook had beaten him in 2019? Look homeward, Seymour, and remember this graphic from last year’s mayoral campaign.

So, are Gahan’s well-heeled revolving corporate donors (including but not limited to HWC) now lining up to contribute to local relief efforts in a time of 20% unemployment?

Is Mayor Gahan reminding them about the optics?

You know, “hey, um, guys — well, thinking back to all that pay-to-play money you gave me, then I gave tons more of it back to you, um, uh, couldn’t you maybe, like, send a little of it this way, you know, to taxpayers in their time of need?”

A city shakes with laughter. The mere thought prompts hilarity. Which comes first, being unable to imagine Gahan ever once thinking to ask them, or those well-dressed campaign donors conveniently failing to conceive of the idea on their own?

But wait — there’s much more.

For instance, it appears that Extol Magazine now owns a stake in the New Albany Housing Authority. Hard to miss a privatization of such size; has Ben Carson already cashed the check?

I blame it all on COVID.

It’s the NAHA monthly newsletter at the Joomag website, boasting a new cult of overpaid administrative personality in the offing, and I’m sure the official explanation will include trite Business First-speak about strategic partnerships in communications, synergy, and charitable backpack blessings.

Still, this would constitute a relationship, and ever since January 1, lifelong Republican Jason Applegate is destined to find these LinkedIn affairs troublesome owing to a nagging topic called “ethics.”

Presumably he still owns Extol, and may or may not continue to serve as the magazine’s chief ad sales person during the first year of his term as Democratic councilman-at-large.

As such, any connection whatever between the business affairs of a public agency like NAHA, with its yahoo poobah and sycophantic board both appointed by the mayor, and an outside entity owned by an elected official like Applegate is deserving of scrutiny.

Donald Trump may be president, and Gahan persist as mayor-for-life, but conflicts of interest have not magically disappeared from the planet. The newspaper in its pathetic death throes won’t help us, pandemic or otherwise. Rather, ordinary citizens must keep their eyes fixed on the clique’s gyrations, and demand answers to their pertinent questions.

There’s yet another news item: our new three-story tall anchor symbol on the south side of the parking garage. It’s horrendous, but there is consolation in the absence of Dear Leader’s gleaming mug. 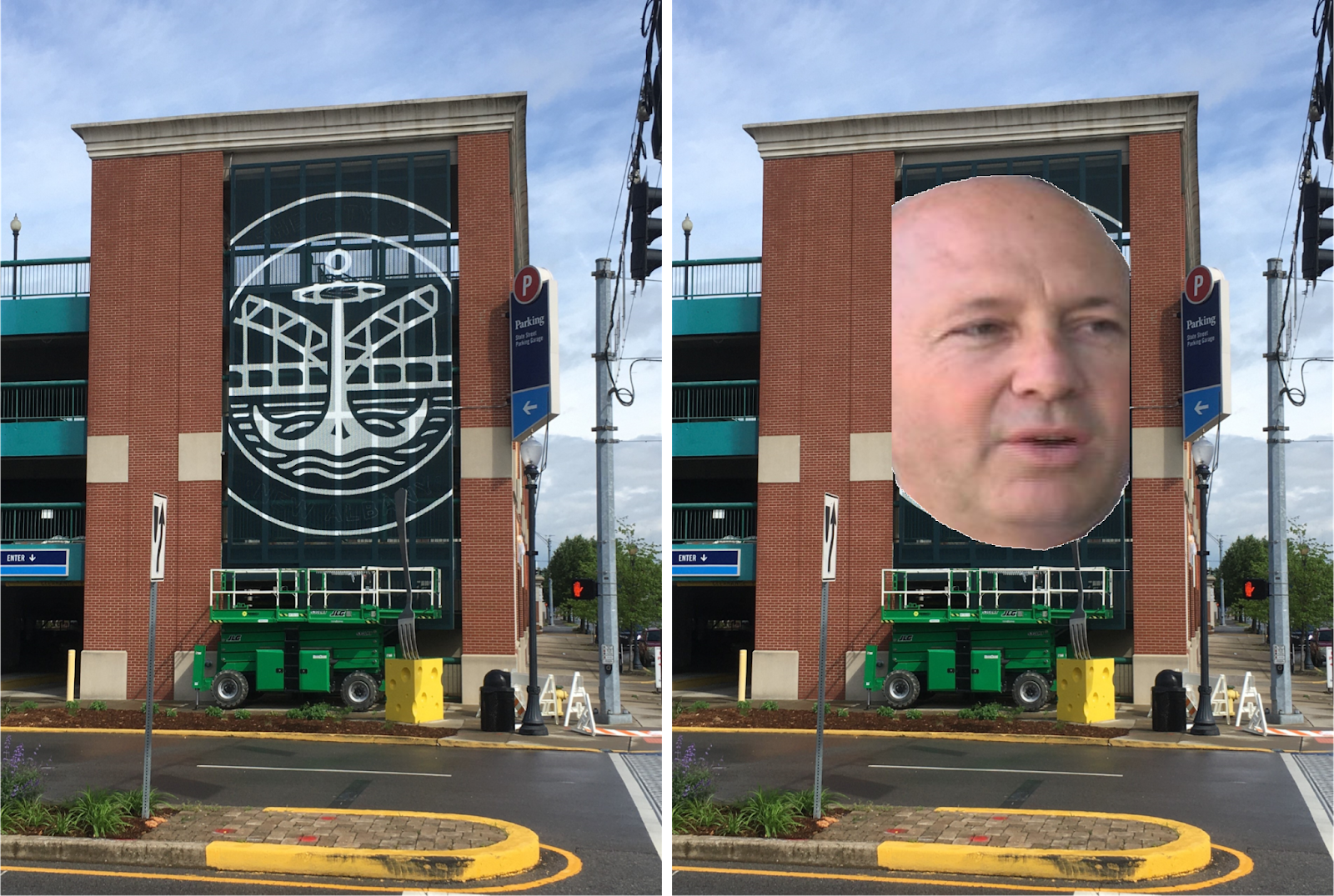 Oft times in the past I’ve joked about the way Team Gahan’s fondness for anchors has resulted in ubiquitous imagery alarmingly similar to the vainglorious shambles of Mussolini’s Italy, spreading like a virus throughout the city.

For those just tuning in, all these anchors weren’t ever submitted for approval to the city council — and we already have had a city symbol on the books. But David “Bag Man” Duggins, previously referenced above as the newly buttoned-down overlord of NAHA, thought anchors looked cute.

Hamster wheels spun, a “marketing device” was born, and now we’re drowning in the inanity of its ceaseless citywide repetition. The governing clique routinely scoffs at me for mentioning Mussolini’s name, and yet the plain fact that few of them have bothered reading books implies an unfamiliarity with the way totalitarian systems use symbols. It’s precisely the same, as with Gahan’s parks department cap.

However, at this late date it has become evident that I may have been wrong slightly mistaken all along. It was pointed out to me recently that anchors can symbolize conditions quite apart from being deployed at water’s bottom to prevent forward progress.

Life, stability, a connection: over time, it was only natural that the anchor became a symbol of love. This object is often depicted as a symbol of fidelity: the anchor gets firmly planted into the bottom of the ocean floor and provides the ship with the stability it needs. This is the same stability that two people who are in love with each other rediscover day after day.

Many couples get matching anchor tattoos to symbolise their eternal love. Or they wear jewelry embellished with this meaningful nautical symbol.

Turns out that Duggins is a devotee of the Hallmark Channel.

April 23: ON THE AVENUES: Hemingway in a time of mercifully silent thunder.

April 9: ON THE AVENUES: #VoteEwwNoMatterWho, or when being realistic means being radical.

April 2: ON THE AVENUES: Pandemic, pornographic, pecksniffian. Just three random words until the booze kicks in.