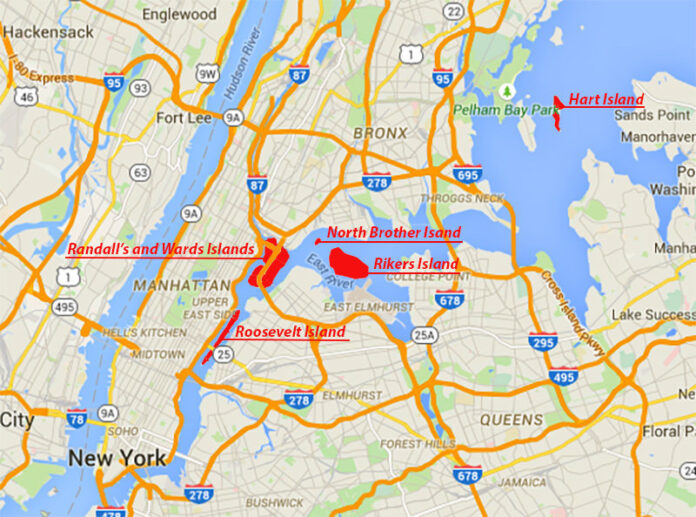 In 2015, Atlas Obscura ran a five-part series called Islands of the Undesirables, documenting “New York City’s tendency to put its undesirables on islands around the boroughs.”

Which reminds me that on the general topic of undesirables, I must interject a book recommendation: Low Life: Lures and Snares of Old New York, by Luc Sante, published in 2003.

Luc Sante’s Low Life is a portrait of America’s greatest city, the riotous and anarchic breeding ground of modernity. This is not the familiar saga of mansions, avenues, and robber barons, but the messy, turbulent, often murderous story of the city’s slums; the teeming streets–scene of innumerable cons and crimes whose cramped and overcrowded housing is still a prominent feature of the cityscape.

Low Life voyages through Manhattan from four different directions. Part One examines the actual topography of Manhattan from 1840 to 1919; Part Two, the era’s opportunities for vice and entertainment–theaters and saloons, opium and cocaine dens, gambling and prostitution; Part Three investigates the forces of law and order which did and didn’t work to contain the illegalities; Part Four counterposes the city’s tides of revolt and idealism against the city as it actually was.

Low Life provides an arresting and entertaining view of what New York was actually like in its salad days. But it’s more than simpy a book about New York. It’s one of the most provocative books about urban life ever written–an evocation of the mythology of the quintessential modern metropolis, which has much to say not only about New York’s past but about the present and future of all cities.

Another offbeat chronicle of NYC is here: The Big Oyster: History on the Half Shell, by Mark Kurlansky. The city’s superlative setting amid the Hudson River’s estuary has been altered (and vastly compromised) by humanity these past five centuries, but originally the vicinity was a natural paradise and one of the oyster capitals of the entire planet.

What all this proves to me is that there might be an Atlas Obscura dedicated solely to New York City and its immediate surroundings. Historical and cultural references to NYC are so many and varied that they’re almost part of the collective American DNA.

This said, and perhaps oddly, while I’ve changed planes a few times at JFK and LaGuardia, and once spent the night in a seedy hotel there after a flight delay, I haven’t actually BEEN to the Big Apple, ever. Tirana, Lisbon, Oslo and Moscow, but not New York City.

There are two coronavirus-related reasons for this New York State of Digression, both in Gothamist.

Ten days ago, and it seems like so much longer; at any rate, it fascinates me that some folks on anti-social media found it necessary to vociferously deny the existence of mass graves on an island used as a potter’s field for 100 years … where graves in this fashion are, in fact, the norm.

And, statistically, the number of such burials skyrocketed during COVID’s (so far) peak in the city. Given that potter’s fields are the resting place of last resort, this should tell us something about the victims of the virus — that is, if we have any interest in shutting up and paying attention.

I wonder how Kevin Zurschmiede is spinning this one, assuming of course that he’s even aware of it.

Closing note: Just last December, Hart Island’s status changed and it will become publicly accessible parkland, bringing to a close a century of draconian inaccessibility. Any accompanying measures to memorialize the undesirables would be a fine thing, indeed.