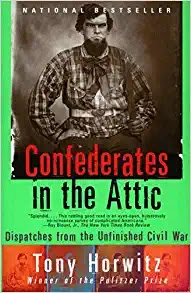 I’ve been a Civil War buff since childhood, but even so, the genre of battlefield reenactments always has puzzled me.

In his entertaining book, Confederates in the Attic: Dispatches from the Unfinished Civil War (published in 1998), the late Tony Horwitz considers the Civil War’s numerous legacies, including the meticulous and obsessional efforts at authenticity on the part of those engaged in bringing 19th-century military campaigns back to life.

Horwitz describes one of the participants:

“One hardcore took this method acting to a bizarre extreme. His name was Robert Lee Hodge and the soldiers pointed him out as he ambled toward us. Hodge looked as though he’d stepped from a Civil War tintype: tall, rail thin, with a long pointed beard and a butternut uniform so frayed and filthy that it clung to his lank frame like rages to a scarecrow.”

When I was much younger, I had the good fortune to visit more than a few of the Civil War battlefields — Shiloh, Chickamauga, Chancellorsville and Gettysburg, among others — and these occasions always seemed appropriate for reflection about cataclysmic events in times long since passed. You’d think the vivid colors and immediacy of a battlefield reenactment would complete the scene, except that it never scratched the itch with me.

The very thought of reenactments being staged to observe every detail of conflict sans the indescribable pain and sure death borne of extreme human violence seems a sophomoric intrusion of sorts, something conflicting quite jarringly with any notions of sacrificial hallowed ground – assuming even these thoughts have any genuine merit in the first place.

Men and their machines come and go, but ideas live on, and perhaps it is because the reenactment genre misses this fundamental point about the power of ideas that I fail to grasp it. It’s the future that matters, as approached with accumulated experience gleaned from the past’s examples. The future is why any of us bother getting out of bed in the morning. The past is gone, and the present is a figment of conceptual imagination, one entirely ephemeral.

Concurrently, yes, the precise details of how a 150-year-old cotton tunic was sewed together have their place, as do pageantry and spectacle, but re-animated hardtack and nighttime spooning (soldiers huddling for warmth) pale in comparison to the sad fact that in the year 2020, roughly half the American populace — generally the paler-hued ones — seems to have willfully forgotten what the Civil War was all about, hence the word “unfinished” in the title of Horwitz’s book, itself 22 years old.

In a thoughtful 2013 essay, Horwitz suggesteds “the 150th anniversary of the Civil War is too narrow a lens through which to view the conflict.”

150 Years of Misunderstanding the Civil War, by Tony Horwitz (The Atlantic)

… It’s hard to argue with the Gettysburg Address. But in recent years, historians have rubbed much of the luster from the Civil War and questioned its sanctification. Should we consecrate a war that killed and maimed over a million Americans? Or should we question, as many have in recent conflicts, whether this was really a war of necessity that justified its appalling costs?

Convincing these people that certain foundational issues pertaining to human rights were resolved long before the advent of the internal combustion engine probably ranks as more important than reenacting battles, assuming there is a future without a further round of secession.

Knowing what history is trying to tell us? Priceless.

The preceding was written on October 31, 2013, and I touched it up a tad to reappear six and a half years later. Confederates in the Attic is a fine book, and I recommend it heartily. It has been a while since I read it, but I’m confident the subject matter remains relevant.

In 2013, my aim was to relate the book to a situation in our own city, this being the New Albany Bicentennial celebration of 2012-2013. Current city council president Bob Caesar was in charge of the Bicentennial. Six and a half years later, the public has not seen the financial records documenting these events. In response to public access requests, the city denied possessing them. Caesar once suggested they were in his possession, although nothing came of this.

Here’s the second half of my 2013 Confederates in the Attic digression. Ironically, the attic probably is where those records reside to this very day.

Such is the critical error committed repeatedly during the past year by the cadre of well-intentioned, history-loving New Albanians who were brought together to contribute planning for this year’s Bicentennial celebration – an event that shouldn’t be occurring until 2017, anyway, since that’s when the city was incorporated … sorry, I digress.

The customary guiding lights have hoarded the process and tried to imbue the celebration with symbolism of their choosing, and yet the enduring difficulty with symbolism is the variability of the symbols themselves. They mutate incessantly, depending on one’s perspective and general vantage point.

Do you remember the centerpiece of the grand American bicentennial in 1976, when the old, tall, “masts from the past” sailing ships came into the harbor at New York?

It was a wonderful and epochal party, redolent with symbolism – flags, patriotism and Americana. The newspaper accounts agreed, but the late Randy Shilts, author of And the Band Played On, saw something else. To Shilts, the occasion of July 4, 1976, might well have been the point when Patient Zero kicked off the worldwide AIDS epidemic (this supposition has been disproved, by the way).

Wooden ships were on the water, and the future was pounding on the door. It is quite possible that owing to Ronald Reagan’s backward-looking obsession, we took far too long reacting to the scary reaper out on the stoop.

And so it is that from the very start, New Albany’s bicentennial program template was locked into a pattern so utterly predictable that Year Zero itself has been a massive yawner of an anti-climax.

Opposing ideas have not only been dismissed; they’ve been actively resisted, and it’s both sad and infuriating to contemplate the extent of an opportunity wasted. Apart from the solitary tangible gain of an over-priced, generically designed public area, variously known as Somnolent Estates, Rent Boy Park and Caesar’s Folly (the “official” designation is Bicentennial Park), we’ve been given a carpetbagger writer’s coffee table book to remember our rare old times and what seems like 4,762 occasions to watch as the selected don period costumes, dance the minuet, and recite the enumerated hagiography of the historic preservation code — cookie-cutter events priced primarily to recoup the book’s lamentable costs.

It’s all safe, white-bread and oh-so-conservative, and fully appropriate for the buck-a-day extras at yet another Lewis & Clark expedition commemorative film, but it remains that the problem with making our bicentennial entirely about the city’s past, and not in any discernible way at all about our future, is that the situation begs a rather embarrassing question.

Why were our urban forefathers adept at city building for the times to come, but their modern-day ancestors are able to muster little more in terms of achievement than decay management?

You’re thinking: Haven’t we come a long way during the past few years?

(We have. But what about the three decades before that?)

Downtown is revitalizing, isn’t it?

(If eating and drinking’s your thing, yes it is. If retail gains, residential enhancement, community engagement and two-way, calmed and completed streets interest you, then welcome to our default condition of perpetually self-flagellating stasis)

But Roger, don’t I look marvy dressed up as a Scribner?

(You needn’t ask me. I’ll be sober in the morning, but we’ll collectively experience this bicentennial hangover for the rest of our lives. You might direct your inquiry to that child slouching over there, assuming he’ll relinquish his iPhone)

And so, the safe and genteel rewriting wrought by the Coup d’Geriatrique winds its way toward the inevitable reenactment of New Year’s Eve, 1893, when a slew of white folks gathered somewhere amid Benedictine sandwiches and non-alcoholic cider, and chatted amiably about keeping the lower classes firmly in their place.

In the vacant lot where daughters once were paired and insider trading schemes consummated, the future is now. An empty liquor bottle meets pavement, drivers ignore pedestrians, and Farmers Market expansion plans are recycled by the same-way-every-single-time design suspects as Big Gulp cups flutter to the pavement.

Somewhere in the city, a dog barks.