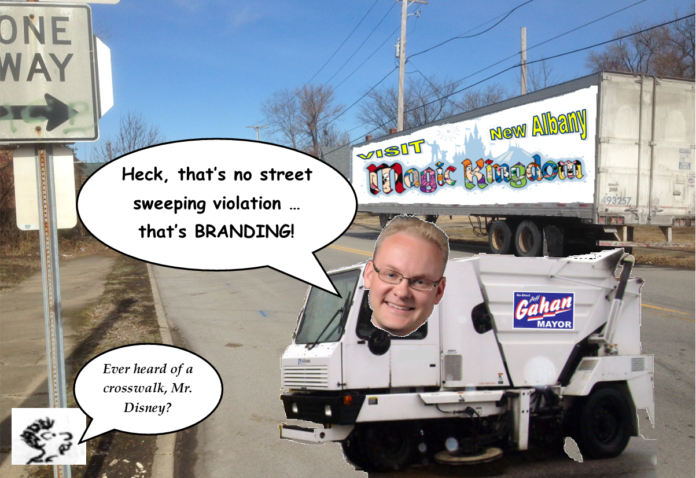 Word has come via 5th district councilman Josh Turner: “No street sweeping through April 7th and subject to change.”

Thanks for asking, Josh. After all, the Bored of Works hadn’t gotten around to the press release.

This brief suspension of inanity is pleasant enough, given the strange new world of coronavirus containment. Should residents being urged to stay inside also be compelled to go outside and move their cars?

In spite of Mayor Gahan’s ongoing efforts to purge learning in favor of the alphabet according to HWC Engineering, words do have meanings, ideas actually matter, and in New Albany street “sweeping” hasn’t ever been an issue of cleanliness.

Rather, it is a political hypocrisy issue, fully exposing this city’s historic tendency not only to tolerate selective law enforcement, but to double down, institutionalize and celebrate it as a civic birthright.

A few years back Bluegill perfectly summarized the prevailing idiocy:

A wasteful program is getting more wasteful. As a Midtown resident. I wish they’d stop rather than expand. This is a parking ticket revenue grab, hounding locals for cash while truckers and other passers through speed by unhindered. We’re continually told the city can’t afford this or that but we can always afford to pay people to ride around in circles all day writing ridiculously expensive tickets to residents. They even write them when the sweeper isn’t sweeping, when people have blocked absolutely nothing. It’s a joke.

To repeat with clarity: street “sweeping” should not be expanded. It should be ended. The physical process of “sweeping” is largely futile, and there is no United Nations storm water “law” stipulating dust cloud creation as a workable corrective to anything. Genuine drainage impediments like leaves and garbage barely are addressed by “sweeping.”

We’d be better off spending the time and money on drain cleaning and waterway improvements. Instead, the City has chosen the least effective (but most profitable) system to expand.

However, when it comes to profitability and effectiveness, the most profound outrage of all is that parking regulations supposedly applying to all city residents are enforced in some instances, as during street “sweeping,” and not in others, as in the entirety of the historic downtown business district.

Wednesday is street sweeping day at my address.

Being a good citizen, I’ll go out and make sure the car is moved from the north side of Spring Street, lest I receive a citation for blocking the street sweeper.

Meanwhile, a few blocks west across an imaginary line somewhere, it’s theoretically possible to park for weeks on end, in front of a downtown business, taking up a parking space without the slightest worry of being penalized. That’s because we don’t enforce parking regulations … unless we do.

You’d need a Ouija board to know when, where and why — and this must stop.

I’m not convinced the street sweeper has come past for a very long time, judging by the appearance of the parking lanes and the chronically unaddressed instances of road kill in the bicycle path, but when it does, the results are frankly ridiculous. Little of note is removed, and much of it is shifted from curbside directly into the bicycle path or out onto the traffic lanes themselves. All the while, citations are being written.

I have a few ideas on how we might improve this situation. Please read, and give me your feedback. Unlike the current occupant, I’m eager to listen.

A Baylor Paper on Street Sweeping.

HISTORY: In selected portions of New Albany, from March through October, city crews operate large vehicles with rotating brushes that are designed to “clean” the streets. A complex system of schedules make on-street parkers subject to citations and fines if they leave their cars along the curbs of these selected streets at specific times.

It is important to note that what gets “swept” are the parking lanes – not the streets per se. Although clearing the streets of litter, brush, debris, and deposited oils is a valiant goal, this ongoing program produces onerous side effects while being mostly ineffective at cleaning the selected streets.

Ostensibly, the program is part of an agreement with the EPA as part of this city’s efforts to comply with The Clean Water Act. The sweeping trucks are assumed to be keeping detritus from reaching our streams, including the Ohio River.

PREMISE: In fact, the sweeping program merely rearranges dirt while depositing it up onto sidewalks and onto nearby buildings. In addition, residents are subjected to inconvenience and financial loss. The program is almost universally considered to be a nuisance and to be ineffective. That conclusion is reinforced when we consider that many other streets that drain into our waterways are not subject to any kind of regular street sweeping program.

Further, the inclusion of this street sweeping program into our Clean Water Act compliance protocol is a fraud.

Petroleum products are the most toxic pollutant likely to be transferred from our streets into local waterways. Yet, we do not even attempt to clean the streets themselves – only the parking lanes.4

Perhaps, with other and/or better functioning equipment, a street cleaning program would be effective. But as currently constituted, the program is little more than an expensive make-work project and a scheme to extort money from those who must park their vehicles on city streets.

PROPOSAL: Effective immediately and by executive order, I will declare a 1-year moratorium on the existing street sweeping program. During that year, my administration will explore the implications of the existing program and maintain a regular inspection and reporting program on the cleanliness of the streets within the program area.

We will also inspect those streets outside of the existing program during this moratorium year. As most debris and deposited oils enter our waterways via storm drains, our stormwater professionals and advisers will be heavily consulted.

In addition to routine storm drain clearance, we will operate a crash program of drain clearing before impending storms and after known storms.

If we decide to resume the program in calendar year 2017, we will only do so if it can be proved to be effective.