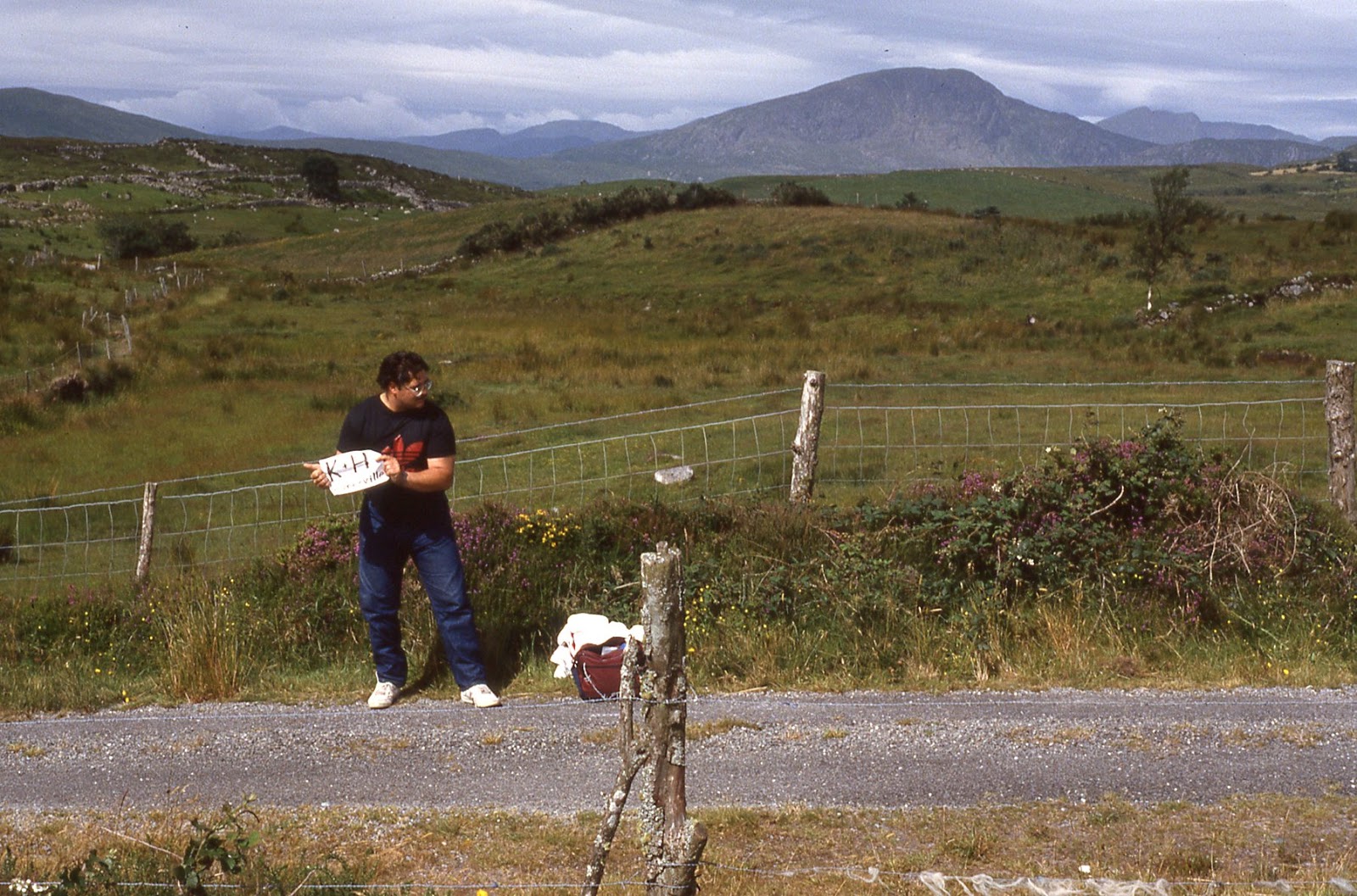 During the late spring and early summer of 2017, I finally got around to digitizing some of the old slides from ancient times. It occurred to me to tell the story of the 1987 European Summer, posting roughly on the same date the photos were taken, albeit 30 years later.

Now it’s 2020, and an exceedingly dry (on-premise) St. Patrick’s Day owing to the measures mandated by Indiana state government as we seek to flatten the curve of COVID-19.

Pints&union might as well be “A Pub with No Beer.”

30 years ago today: Wonderful countryside and birthday pints while in Kenmare.

Previously: 30 years ago today on THE BEER BEAT: Stouts galore in Cork, Kinsale and the Hibernian Bar, but in Ballinspittle, not so much.

Barrie and I had a week to roam before returning to Cork for the U2 concert, and so into the countryside we went.

At some point during our time in Ireland, Barrie and I entered a pub and struck up a conversation with the woman working behind the bar, who turned out to be the pub’s owner.

She was delighted that we were American, happily divulging that she’d put Budweiser on tap the day before, because the great American lager was only then being introduced to the Irish market in earnest.

As gently as possible, we explained that drinking Budweiser really wasn’t why we had come to Ireland, but thanks anyway.

She persisted. Did we happen to know that Budweiser was brewed under license in Ireland, not imported from America? We didn’t. Weren’t we curious? Perhaps we’d like to buy a pint each of Budweiser and see for ourselves if it tasted the same?

After a humorous negotiation, we convinced her to give us a half-pint each, and we’d taste test the Budweiser for her. Don’t worry; we tipped well.

Somewhat anticlimactically, to me Irish-brewed Budweiser tasted almost exactly like Irish-brewed Harp Lager. Fortunately, we didn’t see much more of Budweiser during the trip, but I suppose it was adequate as a calibration beer.

Returning to the narrative, from Cork we caught a bus to Kenmare. The bus spent part of the journey traversing a segment of the Ring of Kerry, the scenic regional road route. In fact, we’d chosen Kenmare because it was said to be the “jewel” of the Ring of Kerry.

Indeed, it was a friendly little town amid evocative countryside. The town sits where Kenmare Bay ends, roughly 30 miles from the sea. There was blue water, green hills and ample black ale.

There are no surviving records of where we lodged in Kenmare. My fickle memory insists it was a guesthouse or small hotel of some sort. I wrote the words “Wander Inn” in my notes on the arrival day. There still is a pub by this name, and now it has a bed & breakfast upstairs, but the name just doesn’t sound right. Maybe it’s the place with the Budweiser landlady.

(Upon further reflection, I believe it was the Kenmare Fáilte Hostel) 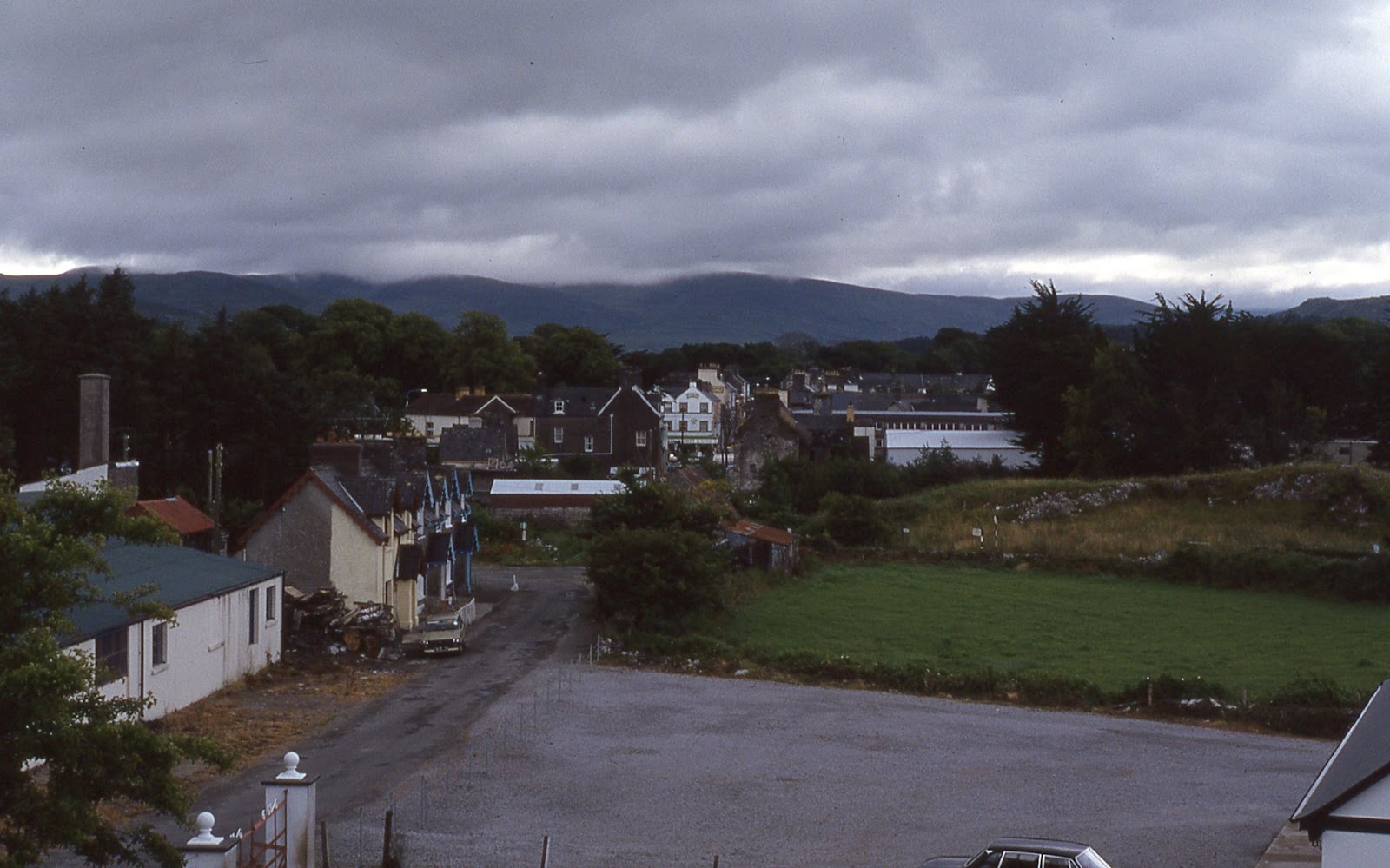 The relevant point about Kenmare was that one didn’t have to walk far from town for “rural” to begin, and we did just that. The hike on our second day in town took us north, toward what I have learned is the direction of Killarney National Park. 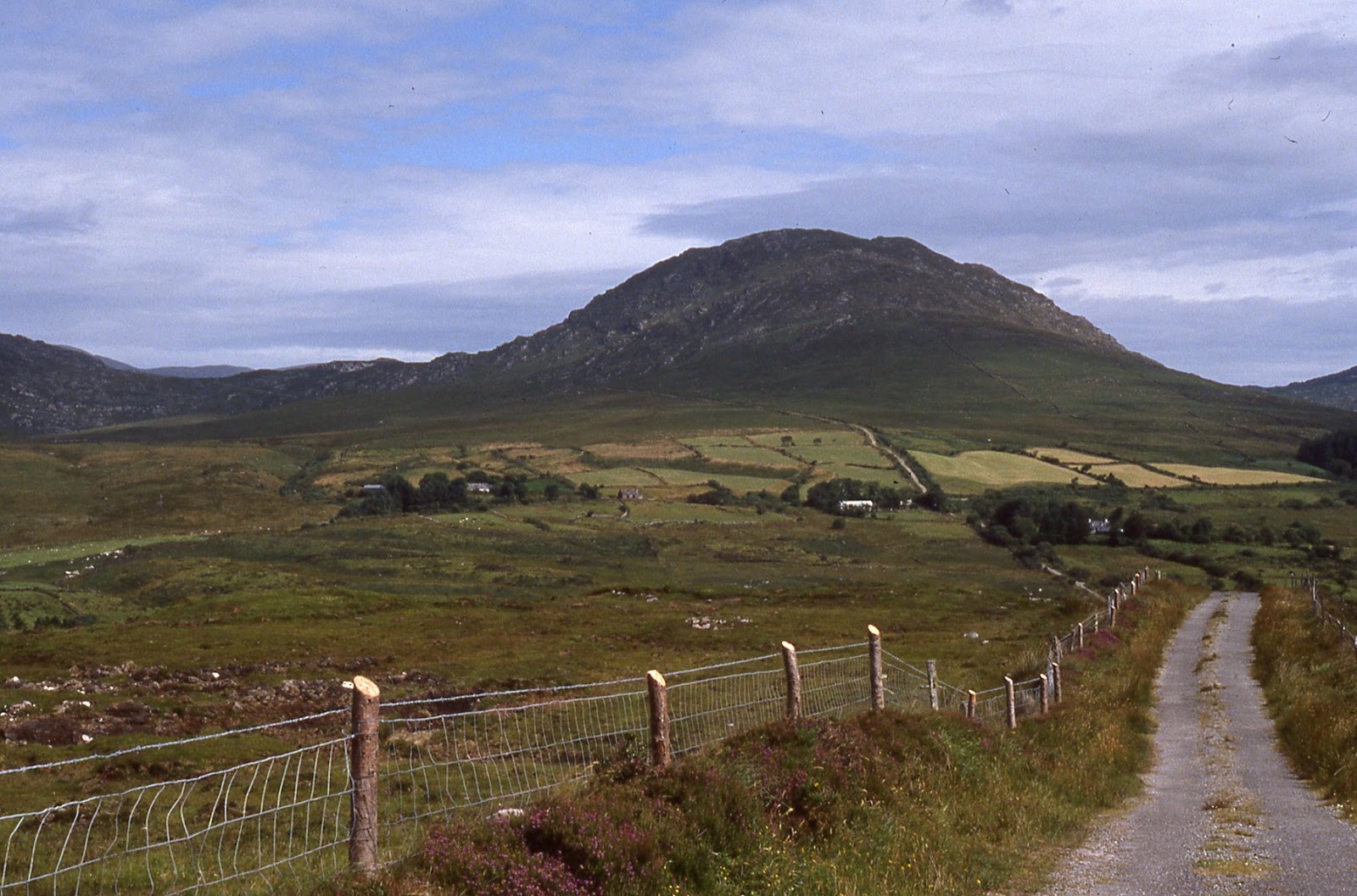 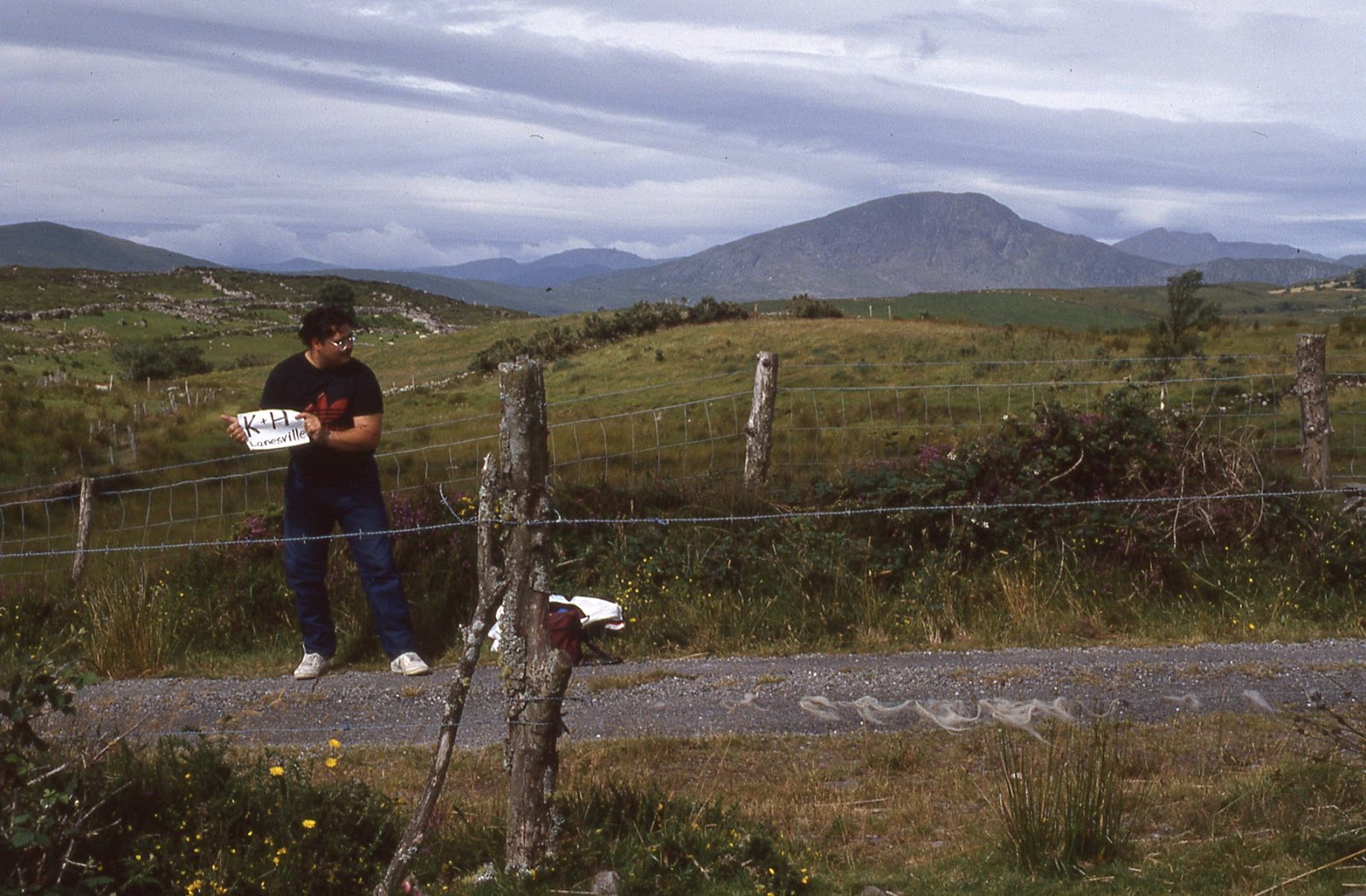 Sunday, August 2 was the signature Kenmare moment, when we adjourned to a pub called The Coachman’s Inn for a one-day-early celebration of my 27th birthday.

Gaelic football was on the telly, and Barrie was buying. A tad light on cash given what we’d likely be spending, he asked if The Coachman’s Inn accepted plastic. It always was a good idea to ask first. Without exaggeration, I’d estimate that in 1985 and 1987, only 10% of the places where I ate and drank in Europe accepted charge cards.

Coachman’s did, though for reasons unknown it was against policy to run a tab. Barrie would have to pay up front for what we planned to drink all evening long.

I was annoyed, but typically Barrie wasn’t. He made a great show of quick math, counting on his fingers and speaking nonsense German; with everyone laughing, he then told the bar man to charge for 30 pints of Guinness and two servings of beefsteak and potatoes.

Shrugging, Barrie further noted that if need be, we could always give the pints away to someone else. If memory serves, the final tally was 16-14 in favor of Ottersbach — and nothing at all was given away.

Next: Skibbereen, Baltimore and our last days in the Irish countryside.