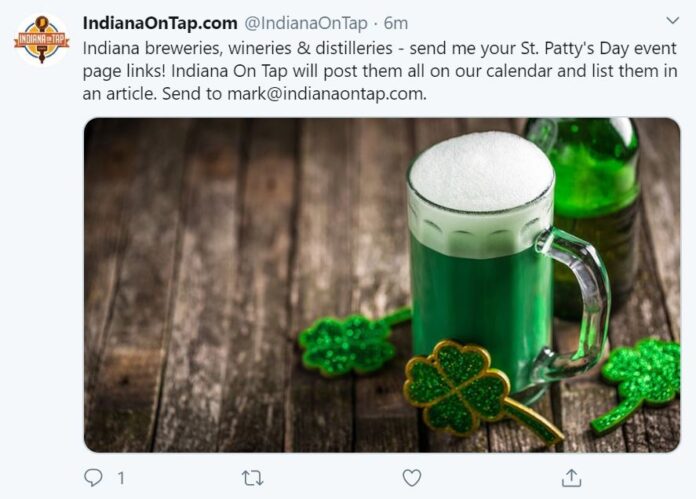 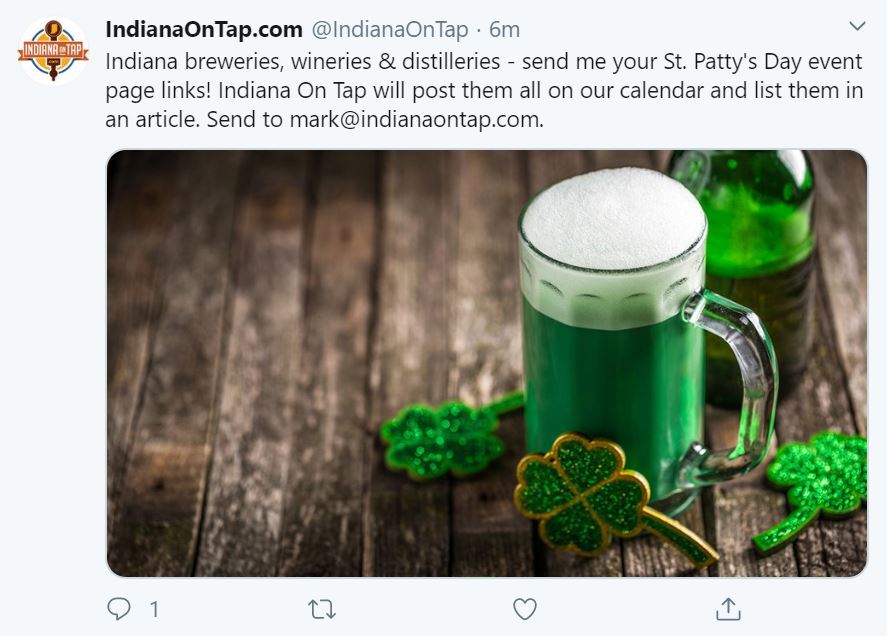 A website (Indiana On Tap) purporting to serve the interests of Indiana breweries, wineries and distilleries, instead perpetuating green beer idiocy. I made a disparaging reference to this social media post, and they didn’t react well to it.

No effort was made to refute my point. That’s #winning in my world, although it should be conceded that they redeemed themselves just a bit here.

In 2020, St. Patrick’s Day falls on Tuesday, March 17. At Pints&union we’re taking the approach of kicking off holiday festivities during the week preceding the annual revel, and doing so in a manner that buttresses tastefulness rather than greenish-hued irrelevance.

Here’s the plan as outlined at Facebook. Smithwick’s Irish Red Ale will be on draft throughout. My favorite passage is this: “Properly poured pints of Guinness all day, every day. Come celebrate with us and NO GREEN BEER.”

You had me at Guinness. 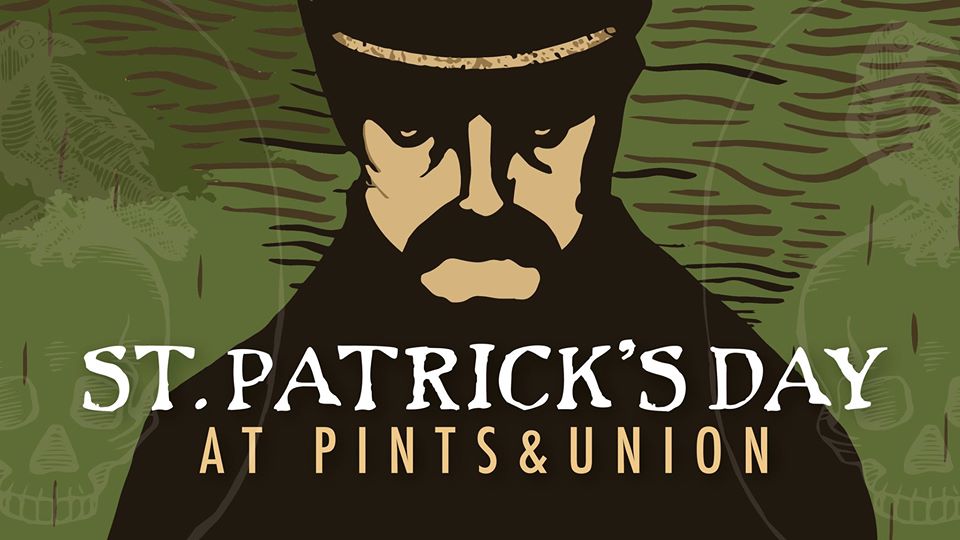 Getting the holiday’s nickname right bears this annual reminder.

Paddy Not Patty: A Modest Proposal to the People of the New World

Those possessed of genuine Irishness, whether by birth or disposition, somehow manage to tolerate these varied knowledge gaps with good humor and eternal grace.

Given my predominantly German ancestry, I’m under no corresponding obligation, so let the rants begin. Ireland remains very important to me; not so much the way many of you choose to celebrate it once yearly. I’ve upped my game over the years, and now it’s your turn.

The following commentary remains my favorite view of St. Patrick’s Day from the service industry’s perspective. It originally was penned almost 20 years ago by a witty East Coast bartender named Chris Halleron, for an e-newsletter called “Hot Trub.”

Some references are dated, but it has remained remarkably accurate. In the past I’d read it, dissolve into laughter, and resolve to stay home throughout the day to avoid the mayhem of amateurs.

However, now that I once again have a local within walking distance to cherish, I’ll make a few appearances at Pints&union, drain a pint or three of stout, and sing Dubliners songs to myself.

Permission to reprint has been provided by the author. Wherever you are, thanks.

Recently a friend asked if I was free to do something on St. Patrick’s Day, but I explained that asking a bartender to take that day off is like asking an accountant to blow off work on April 14.

It is the busy season for bartenders, when we get to see all those cheapskate rookies who haven’t spent a dime in the bar since they threw up in the corner on New Year’s Eve but now decide to poke their heads out of their holes and celebrate the Feast of St. Patrick.

While most people celebrate St. Patrick’s Day on March 17, where I come from it seems to last longer than Mardi Gras in N’Awlins (coincidentally, that’s also taking place right now). Hoboken, New Jersey, where I tend bar, has its parade the first Saturday of March every year, so as not to compete with the mega-parade across the Hudson in Manhattan on the actual St. Patrick’s Day.

Other communities in New Jersey spread their celebrations out in the interim, creating one thick fog of overindulgence week after week until finally the corned beef and cabbage comes out and everybody is too sick to eat it.

Normally I’d be all for such a celebration, but for the fact that somebody has to work these things — and once again that somebody is me. While I’m surely preaching to the choir with this column, I’d like to share some misconceptions and social faux pas regarding St. Patrick’s Day that I’ve had the displeasure of observing over years:

· “Kiss Me I’m Irish” buttons will get you nowhere with the ladies.

· There is no “Official” Beer of St. Patrick’s Day. Despite all its recent financial difficulties, the Catholic Church has yet to seek corporate sponsorship of its saints’ feast days (though it may only be a matter of time…).

· Just because Mario’s Bar and Grill has a shamrock in the window, it doesn’t necessarily make it an Irish bar.

· In most circles, House of Pain’s “Jump Around” is not considered traditional Irish music.

· Ask any brewer and they’ll tell you — when a beer turns green it’s a BAD thing.

· Killian’s Irish Red is made in Golden, Colorado, not Enniscorthy, Ireland.

· Killarney’s is from St. Louis, Missouri, not Killarney, Ireland.

· The number-one selling lager in Ireland is Budweiser.

· Guinness is most certainly not a microbrewery (I can’t make this stuff up — I swear I actually heard someone say that once).

· Asking a bartender to put a shamrock on the top of a well-poured Guinness is like asking Da Vinci to put a mustache on the Mona Lisa.

· Not only is the “Irish Car Bomb” (a pint glass half full of Guinness with a shot glass of Bailey’s and Jameson dropped in) an appalling name for a drink, the waste of Guinness and Jameson in some novelty shooter is nothing short of blasphemy. Save the “Boilermakers” for the Milwaukee’s Best and enjoy a quality beverage the way it’s meant to be enjoyed.

· A pint of Guinness takes a while to be poured properly — if you’re in a hurry then order something else.

· Guinness in a plastic cup is a travesty, no matter how busy the bar is.

· The plural of Guinness is Guinness, not Guinnesses.

· There is no room for a discussion of Irish politics in a crowded bar.

· The stereotype of drunken Irish bar-fighters applies mostly to Irish-Americans.

· The Irish pastime of hurling is not what most people in this country think it means.

· No matter what you may have heard or read, a traditional Irish breakfast DOES NOT consist of a six-pack and a potato.

· No, I’d rather not wear a silly plastic green hat while I’m working, but thanks for the offer.

· There is no “siesta” napping on the bar for St. Patrick’s Day — you have that confused with Cinco de Mayo, which is two months away.

· Just because the bar is open all day and all night doesn’t necessarily mean you have to be there drinking the whole time.

· Just because you gave me a big tip doesn’t give you carte blanche for being an @$$hole!!!

Despite all my bitches, gripes and complaints, I’m well aware that there’s a lot of earning of the green that goes along with the wearing of the green. So it looks like I’ll once again have to “Er-Grin ‘n’ Go Bear-it” as I look forward to the pot o’ gold at the end o’ me rainbow — the long, messy rainbow that it is.

In the meantime, may the road rise to meet the rest o’ ye, and Sláinte … from the bitter bollocks behind the bar.