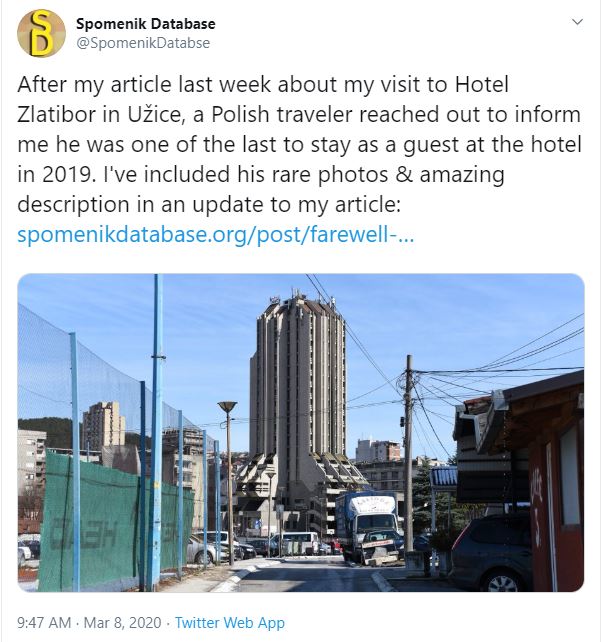 Rest assured, it isn’t lost on me that my fascination with this “brutalist” subject matter probably isn’t shared by more than a half-dozen denizens of New Albania. In point of fact, knowing this empowers me.

Somewhat in reverse chronological order, let’s begin with the screenshot of the above tweet from Donald Niebyl’s highly recommended Spomenik Database account.

“After my article last week about my visit to Hotel Zlatibor in Užice (Serbia), a Polish traveler reached out to inform me he was one of the last to stay as a guest at the hotel in 2019. I’ve included his rare photos and amazing description in an update to my article.”

As context, here is the former hotel’s address in Užice, Serbia.

Niebyl’s Hotel Zlatibor article follows. Bear in mind that my first and only visit to Yugoslavia prior to the civil war and breakup came in 1987, six years after the Hotel Zlatibor was built. That year I traveled by bus from Dubrovnik to Belgrade, which took 10-12 hours and stopped for a break at the Tjentište War Memorial (see the story below).

Looking just now at the map, I almost certainly passed through Užice as well. Youth. It’s wasted on the young.

Once one of the most famous and architecturally stunning hotels of the Yugoslav-era, Hotel Zlatibor in Užice, Serbia sat for years in a state of neglect after the 1990s. In 2020, the process of gutting and dismantling the hotel’s interior began with the aim of transforming it into apartments. Today I accessed the hotel for one last glimpse of this icon of Yugoslavia.

The story of how Niebyl began distracting me on Twitter a few years back is told here.

Donald Niebyl, a biologist from the US, created the Spomenik Database to tell the stories behind Yugoslav World War II memorials – but locals were sometimes bemused by his enthusiasm for these long-neglected monuments.

I now have Nielbyl’s book, and also another by photographer Jonathan Jimenez. The spark that lit this particular flame occurred in 2017, when I resolved to scan and catalog slides from the 1987 European Summer, at long last learning what those symmetrical sculpted objects on the hillside actually were. On December 2, 2018 it was tied together.

Spomenik Monument Database is a book I simply must have.

This minor obsession began with a photograph I took very long ago at a rest stop during a bus trip from Dubrovnik to Belgrade, in what then was called Yugoslavia …

… followed by the helpful intervention of the internet 30 years later, enabling a positive ID.

The two fractal walls of the memorial were erected in the 1970’s to remember Operation Fall Schwarz, otherwise known as the Battle of the Sutjeska. The military action took place during World War II and saw Axis forces attempt to rout a group of Yugoslavian forces and capture their leader.

If you’re the Twitter type, the author of a new book about these memorials maintains an informative presence: Spomenik Database.

The Spomenik Database is an educational resource intended to catalog and demystify the abstract WWII monuments (spomeniks) of the former-Yugoslavia.

As for the book itself, this holiday season it would make the perfect gift for your favorite beer-slinging fan of brutalist monuments.

Spomenik – the Serbo-Croat/Slovenian word for monument – refers to the pioneering abstract memorials built in Josip Tito’s Yugoslavia between the 1960s and the 1990s, marking the horror of occupation by Axis forces and the triumph of their defeat during World War II. Through these imaginative creations, a forward–looking socialist society, free of ethnic tensions, was envisaged.

This publication brings together more than 80 examples of these stunning brutalist monuments. Each has been extensively photographed and researched by the author to make this book the most comprehensive survey available of this obscure and fascinating architectural phenomenon. A fold-out map on the reverse of the dust jacket shows the exact location of each spomenik using GPS coordinates.

Of course, you realize that some day soon, I’ll be trying to talk D into a journey to hunt spomeniks (and brutalist structures) in former Yugoslavia.