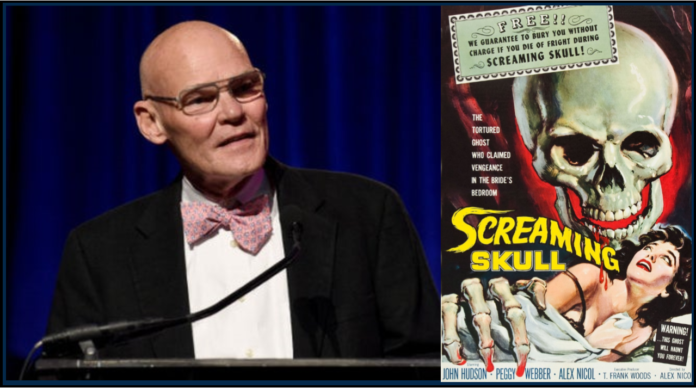 “Swapping kakistocracy for oligarchy will not undo the damage of the Trump presidency. It will merely calcify the rot.”

Kakistocracy via Trump: “government by the least suitable or competent citizens of a state.”

Oligarchy via Bloomberg: “a small group of people having control of a country, organization, or institution.” 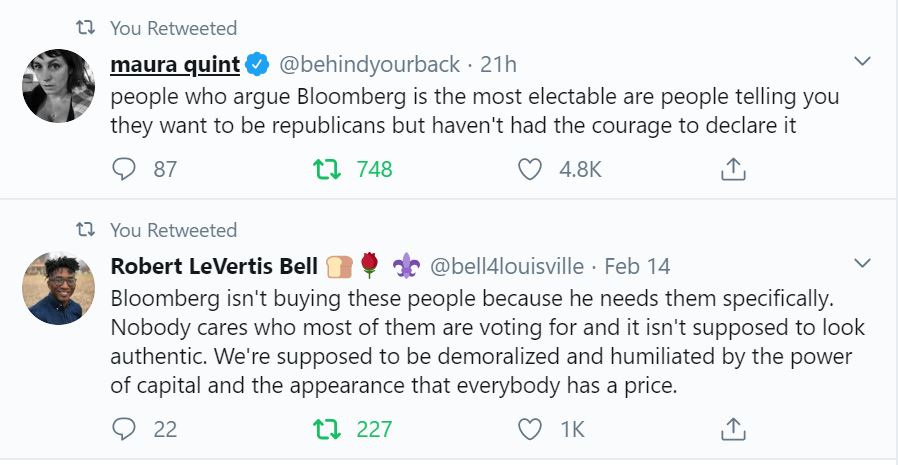 It isn’t only that moderates identifying as “liberal” really aren’t liberal. Apparently they’re also clueless and terrified, positing that “liberalism” is devoid of meaning, and something to be discarded because after all, it isn’t as if there exists reasons to be “for” something instead of merely “against” something else.

Inequality borne of capital accumulation is the problem. There are far more withouts than withs. Pitchfork lube?

An admirer of dictators, a lowbrow misogynist, an unfiltered bigot — Michael Bloomberg is the only Democratic contender who might actually be worse than Trump.

The best way to understand Bloomberg is to study his twelve years leading America’s largest city. Let’s get the obvious out of the way: there were things to like about Bloomberg’s New York, particularly if you were white and carried a degree of wealth. He was, to his credit, an early supporter of same-sex marriage. He cared about protecting the environment. It was a good thing when smoking was banned from restaurants and bars. Bloomberg stuck up for pedestrians and cyclists. The 311 system simplified the process of lodging complaints.

All of this is easily negated by the pain and terror he wrought. If you were a Muslim in Bloomberg’s New York, the NYPD was deployed to spy, without cause, on your mosque. Bloomberg’s police infiltrated Muslim student groups and put informants in mosques. The blanket surveillance, the NYPD would later admit, didn’t produce any tangible leads. Three lawsuits were eventually settled after Bloomberg left office.

Around the time Bloomberg announced his presidential campaign, he cynically ventured to a church in a black Brooklyn neighborhood to apologize for his police department’s maniacal abuse of stop-and-frisk tactics. Under Bloomberg, police stops — which overwhelmingly targeted black and Latino men — increased from 97,296 in 2002 to a peak of 685,724 in 2011. The stops, for these young men, were traumatizing, as heavily armed police officers stalked and then aggressively searched their bodies for no justifiable cause. In 2013, a federal judge ruled the practice unconstitutional.

Rather than accept responsibility, Bloomberg fought back, appealing the ruling. “There is just no question that stop-and-frisk has saved countless lives,” Bloomberg thundered in 2013. “I worry for my kids and I worry for your kids.”

Bloomberg was unrepentant. Police power could do no wrong. In 2011, armed police stormed Zuccotti Park in the middle of the night to forcefully break up Occupy Wall Street, a movement that kicked off a public reckoning with America’s surging income inequality. The protest ultimately offended his sensibilities. “I don’t appreciate the bashing of all the hard-working people who live and work here and pay the taxes that support our city,” Bloomberg said at the time.

Bloomberg’s total lack of interest in staunching his own city’s spiraling inequality fueled homelessness and displacement. Rezonings in formerly working-class neighborhoods spurred luxury development and increasingly unsustainable rent hikes. His lavish donations to Republicans in the State Senate ensured New York’s laws protecting tenants would remain in a weakened state as long as he remained in office. Public housing further crumbled under his watch. And in 2011, Bloomberg killed a housing subsidy program for homeless families, directly triggering the homelessness crisis New York is still grappling with today …