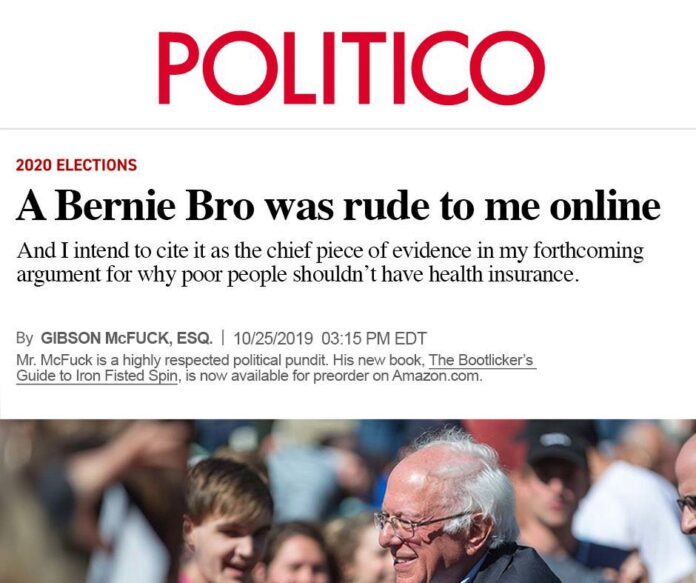 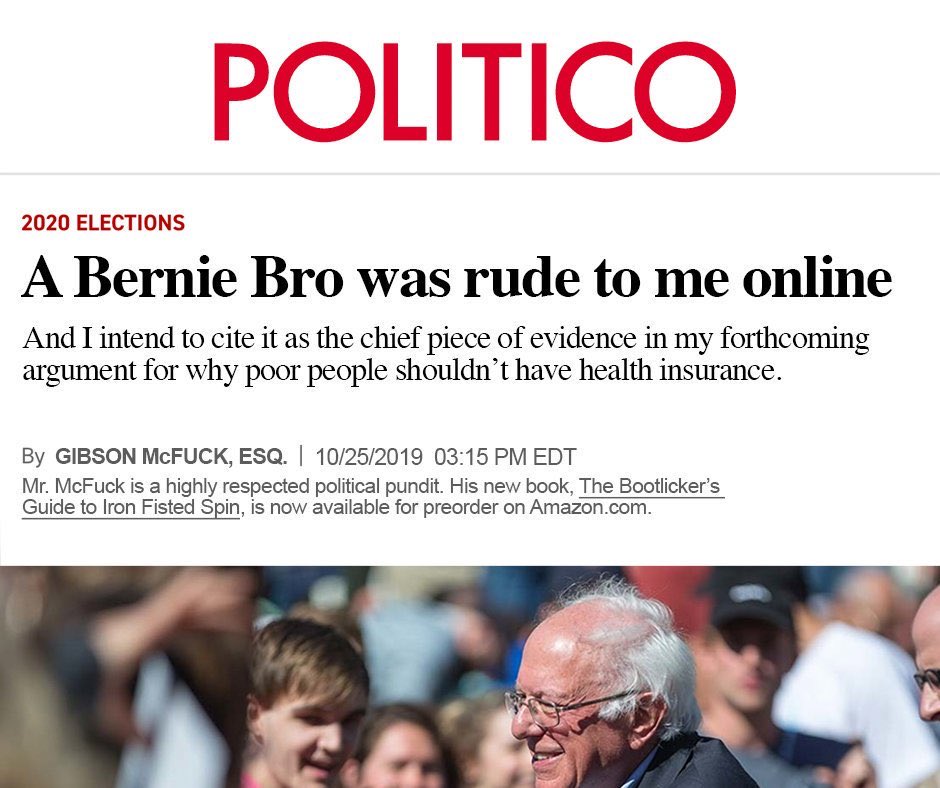 The morning’s Economist Espresso e-mail provides this update of yesterday’s New Hampshire primary on the Periodically Democratic side.

Democrats voting in New Hampshire’s presidential primary picked Bernie Sanders as their favourite candidate, giving him more than a quarter of their ballots. Pete Buttigieg, who pipped him in Iowa’s caucuses last week, took nearly as many and Amy Klobuchar finished a respectable third. Joe Biden trailed badly, again. Andrew Yang and Michael Bennet dropped out of the race.

Time, then, to dispense with the Twitter-driven “BernieBro” myth and focus instead on reality?

Why does the “BernieBro” myth persist? Because pundits don’t understand how the internet works, by Keith A. Spencer (Salon)

… Why do some myths persist, or remain uncorrected by the media, while others dissipate? The short answer seems to be that when they serve a media narrative, or play on existing stereotypes, they grow to possess a power that goes beyond fact or truth. To this list of indefatigable myths, one might add the pernicious “BernieBro” — so ubiquitous a concept that it has its own Wikipedia article. The self-explanatory neologism was coined by Robinson Meyer in an Atlantic article in 2015 before being distorted by the Twittersphere and the punditry — something that Meyer later came to regret, as he felt the term he reified suffered from “semantic drift.”

But that was five years ago, before we had as much data on Sanders’ support base — which, as it turns out, should be sufficient to debunk the stereotype that Sanders’ support base consists entirely of a mythic tribe of entitled, pushy young millennial men. To wit: young women make up more of Sanders’ base than men. He polls especially high with Hispanic voters, far more so than with white voters; Hispanic voters also donated more money to him than any other Democratic candidate. Polls consistently show that nonwhite voters prefer him over the other candidates. Notably, the demographic group that likes Sanders the least is white men.

Moreover, of all the candidates, Sanders has taken in the most money from women. Many of Sanders’ female supporters bemoan how they are ignored by the mainstream press. “The ‘Bernie Bro’ narrative is endlessly galling because it erases the women who make up his base,” writer Caitlin PenzeyMoog opined on Twitter. “To paint this picture of sexism is to paint over the millions of women who support Sanders. Do you see how f**ked up that is?”

Of the three, only Sanders follows the money to show how the Money defeats ordinary Americans every single day. Time yet to stand for something, DemoDisneyDixiecrats?

… The DNC itself has inaugurated a kind of junior league plutocracy whereby its presidential hopefuls must be validated by their supporters sending them cold hard cash. Money as a proxy for voting is the oligarch’s foundational gambit and the anti-democratic forces of the DNC have now substantiated it in their farcical presidential primary process.

Just as the elite in Britain use the emotional ballast of royal regalia to deter rebellion, the wealthy ruling class in the U.S. call upon the trappings of the Constitution, the Bill of Rights, the Pledge of Allegiance, and the flag – all conflated in the notion of American democracy – to quash radical action that might challenge them. Even as its universality has been squeezed hard, the sop of voting – the lure of having one’s voice counted – has been remarkably effective in guaranteeing the quiescence of the people.

The bastion of capital, which affords a dictatorship of the rich and the immiseration of its subject population, is supported by the twin pillars of neo-liberalism, the Republican and Democratic parties. Its walls are battle-hardened against rogue outliers such as Bernie, while the likes of Biden have spent their careers augmenting its fortifications. But there have been moments in that dictatorship, when chinks of humanitarian light have shone through its fortress walls. Its hostility to the wellbeing of its subjects is not necessarily guaranteed. Enter our third old white guy, Mike Bloomberg, flying the standard of the Democratic Party, but refusing to play by the DNC’s rules.

At least since Jackson, America has been built on just enough democracy to ensure that the masses retain their Horatio Alger dreams – believing the myth of equal opportunity and the chance to strike it rich – but never enough to challenge the power of the wealthy. Hard work has been replaced by education as the base material of these dreams, but the latter obscures the debt peonage its achievement often requires and the low-level work it typically enables. Trader Joe’s, the supermarket chain, requires all of its staff to have a college degree. Hard work counts for little in an age when the buying power of minimum wage has atrophied into insignificance. Voting, despite the purging of the rolls and other impediments to its practice, remains for many a feel-good way to connect to the grand mythos of America, inflating the self-worth of those who are otherwise victims of its deceits.

Material wealth, first as stolen land, then as industrial capital, and now as control of information (which today drives the forces of production through algorithms fed by real-time consumer desires, or clicks) is at the heart of the American pathology of exploitation, extraction, subjugation, oppression and the devastation of the natural world. Our putative democracy has been entirely enfolded into this ongoing historical project. It is an enabler of these crimes against humanity. It is an ideological co-conspirator.
His is the only authentic voice for change.