va·por·ware
/ˈvāpərˌwer/
noun INFORMAL•COMPUTING
Software or hardware that has been advertised but is not yet available to buy, either because it is only a concept or because it is still being written or designed.

This morning there was a triumphant announcement at the Jeffersonville newspaper.

The site is a familiar one in the city grid. For nearly two centuries, Centenary United Methodist Church played a role in the faiths of many in the area.

Now that the congregation has moved, the idle building will see new life as an apartment complex. Representatives of Form G, the development company behind the project, said the company has been trying to invest in downtown New Albany for “quite some time,” and is excited to finally have the opportunity to do so.

“This property came up, and it’d been sitting for a while on the market, about a year or so,” president and CEO Eric Goodman said. “Once we got into the details of the historical and preservation components of it, we realized that we could make it a project.”

But the Green Mouse has learned that it’s probably all vaporware. He believes Form G’s option to purchase Centenary expired in December (it may have been renewed as non-refundable payment toward the purchase price) with no offer having been made.

According to Elevate, the church property has not changed hands.

And what does Form G’s “G” stand for, anyway? The Mouse says: “Gahan.” As noted in this post from November 14, 2019, some of Form G’s principals have been priming the mayoral pump for the inevitable municipal incentives.

Maybe they should buy the property first?

The mouse was told the permitting process is underway but not yet completed.

Among the improvements slated for completion by the contractor, Form G Companies LLC (Jeffersonville):

Interestingly available real estate records show no change in ownership of the property. 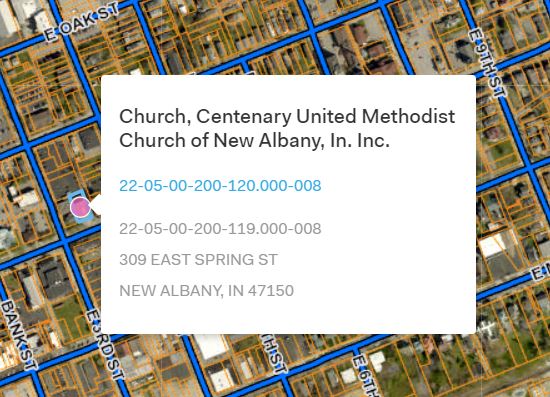 And now for the Jeopardy! answer in the popular category Pay to Play:

Alex, what is a first-time Gahan campaign finance donor?

Does anyone know whether Form G still intends to purchase the property? And why hasn’t the word “luxury” been attached to the project? It’s Big Daddy G’s favorite concept, after all.

Disclosure: This post complies with the parameters of Roger’s sabbatical from local political involvement, having required fewer than 30 minutes to write.