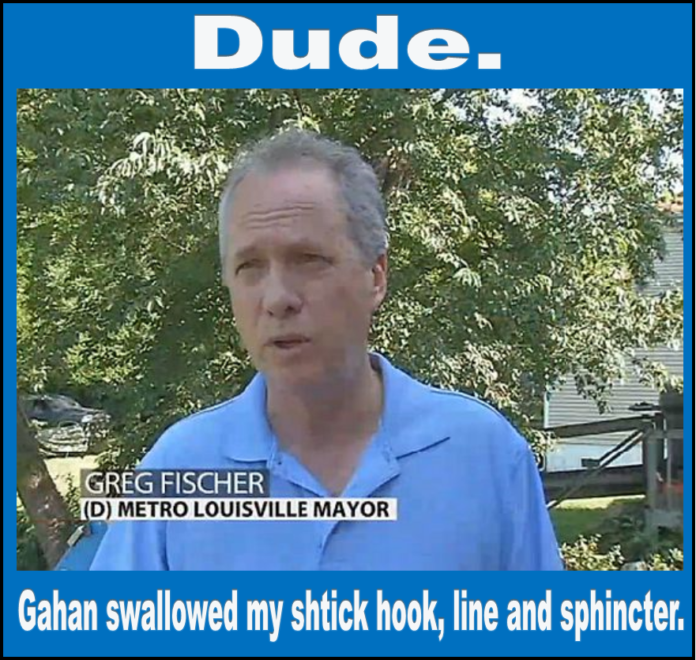 “We can’t eat bourbon, Sir” is about as scathing as it gets. It remains fascinating to observe big brother Fischer and little brother Jeff Gahan, with the latter gazing at his idol with goo goo eyes. It’s revealing and revolting in equal measure.

The basic problem, as identified so presciently by Gertrude Stein a whole century ago, is when it comes to either of them, there’s no there there.

… In his interview with The Courier Journal’s Darcy Costello, Fischer painted a picture of a dreamy 2020, which centers on him being “America’s mayor” as the chair of the U.S. Conference of Mayors.

This role will allow him, he says, to lobby on behalf of the country’s cities, attract more attention to Louisville (which equals more investment) and receive support from his peers — like that which helped him with the national search to hire police Chief Steve Conrad. Fischer said he’d encourage his fellow mayors to be more vision-oriented as they continue providing basic services and managing normal operations of the city.

I argue that Fischer’s vision for Louisville is lackluster at best and lacks the compassion he claims we have. We can’t eat bourbon, Sir, and for those homeowners and residents in the California neighborhood with black residue on their homes from the production of our sacred drink, bourbonism hasn’t been so good to them.