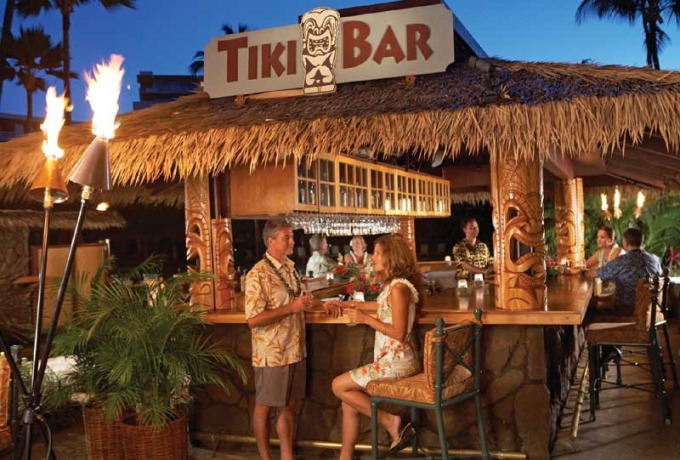 “It’s hard to appropriate a culture that was made up in the first place.”

“A nostalgia that is nostalgic for nostalgia itself.”

“When 21st century Tiki fails to be authentic, it settles for being authentically inauthentic.”

Tiki bars aren’t my sort of pleasure, but to each his or her own. This duly noted, here’s an absolutely riveting overview of how Tiki ever came to exist in America, why it went away, and speculation about the reasons for the genre’s comeback.

This is an uncommonly excellent essay.

The Tiki Bar Resurgence of the Trump Era, by Jackson Arn (The Nation)

“It’s gotten too tacky.”
— Donald Trump, when asked why he was closing Trader Vic’s at The Plaza, 1989

Ignore, if you can, the fact that the man who spoke these words is famous for gold buildings, gold seat belt buckles, and gold hair, and then ask yourself, “Did he have a point?”

By 1988, the year Trump bought the Plaza Hotel, the Trader Vic’s in the basement—probably the most famous branch of the most famous Tiki bar chain in the world—had become that dullest of things, a New York Institution. Three decades’ worth of prep school kids, ad men, and movie stars had been fattened on its spareribs, Samoan Fog Cutters, kava bowls, curry puffs, and pu-pu platters, and when Trump told the Times about his plans for The Plaza, it was predictably outraged. Even Richard Nixon weighed in: “It was always our daughter’s favorite restaurant,” he said, “and it quickly became mine, too.”

Then and now, Tiki provokes these kinds of strong reactions—either it’s insufferable or it’s the best. It’s my friends’ favorite genre of bar, or it’s the worst thing they’ve ever heard of. With their plastic grass, pink paper umbrellas, and yellowing ceramic skull mugs, Tiki bars have been on the cutting edge of tackiness for the better part of their 80-year history. And yet it is the humble Tiki bar, increasingly, where young urban epicures go in search of fresh-squeezed mixers, painstakingly aged liqueurs, wild-fermented imported liquors—in short, “authenticity.” A slew of high-profile new Tiki spots have opened in the last few years—Manhattan’s Mother of Pearl, San Francisco’s Smuggler’s Cove, Chicago’s Three Dots and a Dash—stocked with world-class ingredients and manned by top-tier bartenders. For Americans who were of drinking age in the middle of the last century, this turn of events must seem especially bizarre—since when were Tiki bars authentic or world-class in any way?

You can’t tell the story of Tiki without bringing up vast ingenuity and equally vast bigotry, heroic soldiers and charming hucksters, avant-garde and kitsch. It’s a cultural phenomenon as crude as the society that birthed it, but in a flailing, babyish way that provokes an amused headshake instead of a gasp. It is also, by its very nature, so overdetermined that it forces people to judge it, second- and third-guessing its excesses. It makes a mockery of indifference. No wonder it’s gotten popular again.