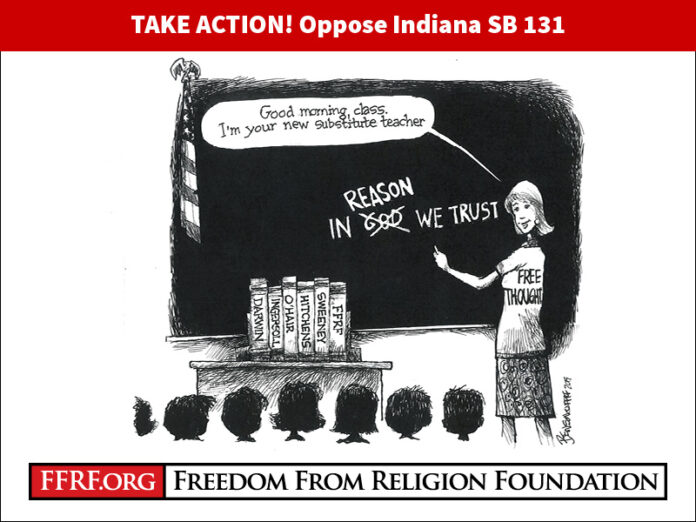 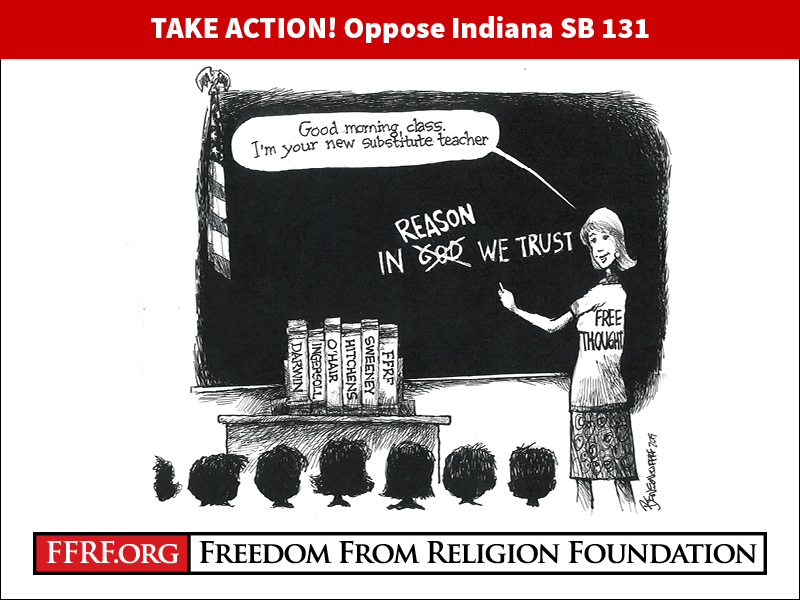 The column’s title is “Proposed Indiana Senate bill would force religion on schools.”

It’s from January of 2019, not 2020, but when it comes to chuckleheaded theocrat Dennis Kruse, every legislative session is the right time to meld church with state.

Another legislative cycle in Indiana, another brazen attempt at forcing Christianity into the public education system. No surprise there.

The bill would allow school corporations to “require the teaching of various theories concerning the origin of life, including creation science.”

The use of the term “creation science” signifies something important. The bill does not simply aim to make students aware that different religions tell various stories about the creation of life. It aims to teach about creationism as if it is science.

The Freedom from Religion Foundation has issued an alert, because now it’s a different year, with another legislative cycle … and the very same repetitive shenanigans from Kruse, who I would refer to as a Tinpot Ayatollah if I thought he was capable of understanding either word.

Where does Hoosierland get these these bad actors, anyway?


URGENT: Please resist “In God We Trust” in schools bill!


The Indiana Legislature is fast-tracking a bill that would require public schools in the state to display “In God We Trust” in every classroom and library. We need your help to ensure that young, impressionable students aren’t subject to religious proselytization.


SB 131 is part of the nationwide legislative push, Project Blitz. Project Blitz seeks to inject state legislatures with a whole host of religious bills, imposing the theocratic version of a powerful few on We The People. It is an unvarnished attack on American secularism and civil liberties — those things we cherish most about our democracy, and now must tirelessly defend.


While politicians claim that these laws are intended to showcase the national motto or inspire patriotism, it is clear that their true purpose is to peddle religiosity to a captive audience. These laws are about advancing the Big Lie that the United States was “founded on God” or Christianity, dismantling the wall of separation between religion and government. The motto “In God We Trust” is inaccurate, exclusionary and aimed at brainwashing American schoolchildren into believing that our nation is a theocracy.


Please use our automated system to contact members of the Senate Committee on Education and Career Development and ask that they stop this bill in its tracks.