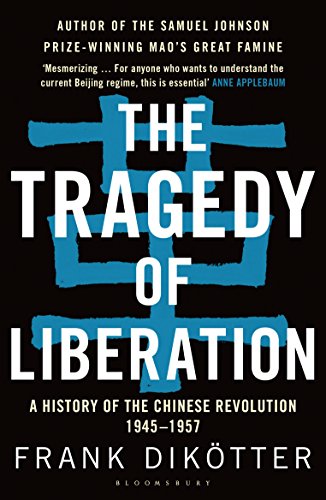 This is a hard, unrelenting book to read. Many thanks to my friend Jon for providing the opportunity to do so.

“The Chinese Communist party refers to its victory in 1949 as a ‘liberation.’ In China the story of liberation and the revolution that followed is not one of peace, liberty, and justice. It is first and foremost a story of calculated terror and systematic violence.” So begins Frank Dikötter’s stunning and revelatory chronicle of Mao Zedong’s ascension and campaign to transform the Chinese into what the party called New People.

The broad outline of the tale Dikötter recounts is known to us, but beyond the numbing statistics he is greatly skilled at weaving the memories of survivors.

For the past decade, Dikötter’s research in China’s archives has given him extraordinary insight into what was happening not just at the top, but at ground level. He’s had access to many personal accounts and reminiscences: he calls his overview of the People’s Republic of China the “People’s Trilogy”. What does such long-term immersion do to the head of such a writer?

There’s a very interesting passage on page 179 of my text, amid the chapter detailing the relationship of the Chinese educated elites and intelligentsia to Chairman Mao during the post-war period of communist consolidation.

But most decided to ‘march at the head and lead,’ in the chairman’s words.If they wanted a job under the new regime, they had little choice but to become willing accomplices — whether through opportunism, idealism or sheer pragmatism. Many did so with relish.

It’s almost as if they were auditioning for board seats at NAHA.


The Tragedy of Liberation by Frank Dikötter – review, by Rana Mitter (The Guardian)

… One suggestion that Dikötter makes is a comparison of Mao’s China with the post-1945 Eastern European regimes that appeared genuine but were in fact puppets of Stalin. However, although Stalin was a mentor, as well as a dysfunctional ally for Mao, the PRC was an indigenous Chinese product. Mao’s revolution, and its monstrosities, were products of forces that came from within China: social inequality, the war with Japan, and a political culture of violence. Other factors also affected the behaviour of China’s leaders, such as the country’s relative isolation from the world economy, about which it could do little in the face of American sanctions. None of these factors remotely excuses the horrors that are chronicled meticulously here, but they do provide a context.

However, even if the book is likely to spark debates about the nature of the socio-economic crisis stimulated by the PRC’s policies, few will be able to deny the human suffering brought about in the name of the new society and described by the author with brutal clarity. It has often been the contention of those who find democracy messy that dirigiste rule can be an improvement (Hayek, who condemned serfdom of one sort, was quite tolerant of various other forms: he described apartheid as “civilisation of a sort” and argued that a “liberal dictator” was sometimes better than a democracy).

Nobody who reads about the cost of the establishment of the PRC in Dikötter’s humane and lucid prose will find much sympathy for the authoritarian case. This excellent book is horrific but essential reading for all who want to understand the darkness that lies at the heart of one of the world’s most important revolutions.