Stephen Beaumont is a Canadian beer, spirits and food writer. I like his style, and he has uncommonly sensible things to say about beer, as with this list appearing at his Twitter account on New Year’s Eve. The list scores nine of ten with me in terms of symmetry (I abstain from #5, as I’ve had few Latin American beers of the sort he cites). 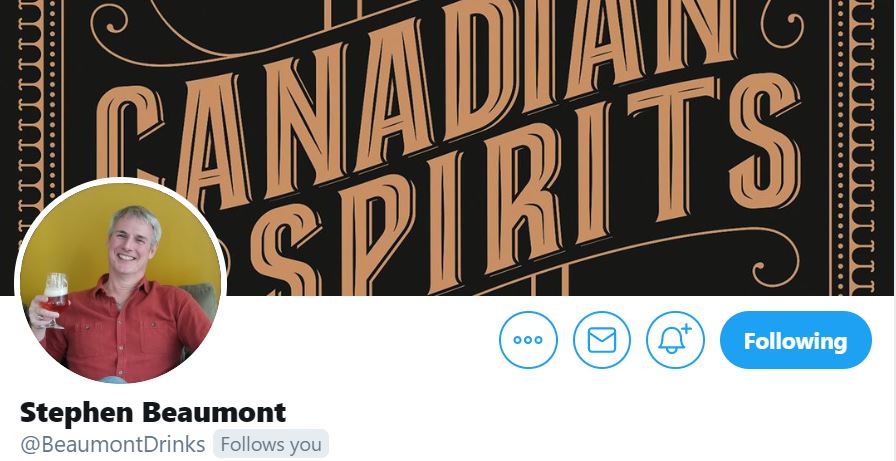 
1) That breweries large and small begin focusing more on quality control so that we eliminate beers with massive chunks floating in them, swollen cans, beers that taste like butterscotch or balsamic vinegar, and so on. 1/11


2) That people stop screaming about market saturation and the falling sky. Yes, growth in what we call ‘craft beer’ is way down, but it is still growth in an overall declining market. That is a good thing. 2/11


3) That beer consumers start prizing flavour and character over rarity. And remember that while drinking local is a very good thing, it should not be pursued at the expense of experiencing all the greatness the beer world has to offer. 3/11


4) That beer festivals continue their nascent trend towards becoming smaller and more carefully organized, with fewer breweries and fewer brands per brewery and more emphasis on quality and excitement. 4/11


5) That more people, especially those in Mexico and South America, discover the amazing things brewing in Latin America, which for my money is probably the most exciting beer market in the world today. 5/11


6) That more breweries operating tap rooms realize that in so doing they are in the hospitality game, and start creating spaces in keeping with that understanding. Also, treating their customers with respect and appreciation. 6/11


7) That beer drinkers, young and old, discover or rediscover how wonderful many old school beers were and still are. And that sometimes forgotten styles like porter, brown ale, bock and others stage a comeback. 7/11


8) That fining and filtration stop being viewed as sins. Yes, hazy works, cloudy works, but there is also nothing wrong with a brilliantly clear beer. 8/11


9) That ‘Beer Twitter’ and other social media stops being so much “I’m right and you’re wrong’ and grows more ‘That’s an interesting view, here’s my take on it.’ 9/11


10) And finally, that everyone who is interested, regardless of age or gender or colour or language, feels comfortable entering a bar or restaurant or taproom or festival and ordering a beer without being in any way diminished for it. 10/11


Happy new year, everyone, and all the best for 2020. May your beer choices always meet your expectations and your glassware be forever ‘beer clean’! 11/11