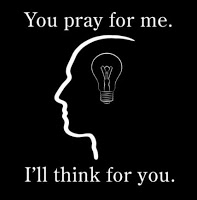 I’ve never been shy about being an atheist.

I try to be who I am all of the time, publicly and privately. In part, this is to offer support and solidarity with those who feel they cannot openly embrace their absence of religious belief. In my case, this absence has been lifelong. The concept of “god” never made sense to me once I was old enough to be in school.

Being an atheist should not matter, and it does not matter — except, of course, at times it does.

There are occasions during the course of my existence in New Albany when I get the strong impression that otherwise inexplicable behavior on the part of others can only be explained by their disapproval of my atheism. I could go into greater detail, but it isn’t necessary. I ponder the extent to which certain opportunities have gone by the wayside because of this. Sleep isn’t lost over these conjectured rejections; I’m the contrarian, combative and defiant sort. Maybe atheism has nothing to do with it, and they merely dislike the way I roll.

I still think about it every now and then. Consider these words to be philosophical musings, nothing more. It wouldn’t be the first time that honesty raised hackles or inspired push-back.

I may be an atheist, but if you’d like to wish me a “Merry Christmas,” I won’t be bothered. It doesn’t offend me, primarily because I’m keen on the notion of Saturnalia in ancient Rome, and that’s where most of the specific Christian observances were borrowed, anyway.

However, if I reply to you by saying “Happy Holidaze,” or “Superlative Godlessness for All,” will you then be looking for ways to isolate me, or to shut me out of society? You needn’t worry, atheist or not, because as Groucho Claus once said: “I don’t want to belong to any club that would accept me as one of its members.”

Following is a letter I wrote to the News and Tribune in 2017.


Figures vary, but nine of ten Americans might believe in God. At least that’s what they say when asked. Many of these believers are Christian.


If another recent study is accurate, 69% of view a belief in God as necessary to be a genuine American.


This is highly disconcerting. Throughout history, atheists have been subject to criticism, persecution and at times overt eradication at the hands of believers of all faiths.


At the very least, atheists often experience a more subtle form of bigotry. For instance, a survey showed more than 30% of respondents preferring atheists be banned from the teaching profession.


Insecurity, intolerance and outright humbuggery always have been regrettable components of human society, and while majoritarian disapproval of atheism isn’t (yet) comparable to racism, sexism and other forms of institutionalized violence, it represents a form of discrimination characterized by ignorance, and one deserving of periodic counterpoint.


The News and Tribune sees fit to publish not one, but two Christian advocacy columns on a weekly basis. When I made my dismay known in a social media comment, I was told by a reporter that this makes perfect sense because many readers are Christians.


Interestingly, research published in the archive of the Society for the Improvement of Psychological Science suggests that more Americans (and newspaper readers) are atheists than may seem apparent, perhaps as many as 25 – 30%.


That’s because the stigma of atheism, as perpetuated by believers, causes many atheists to pretend they’re pious.