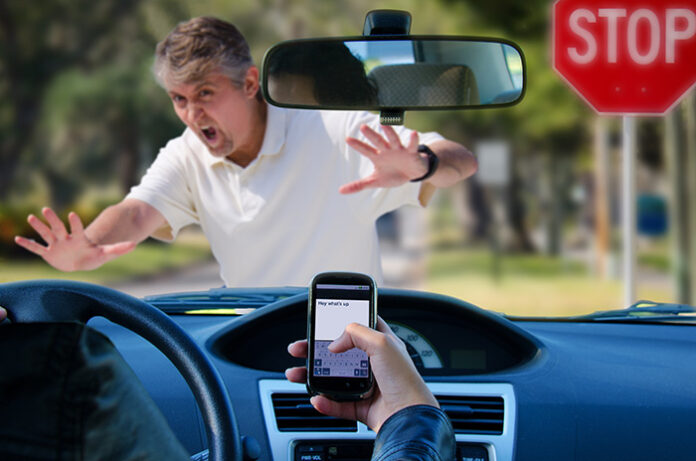 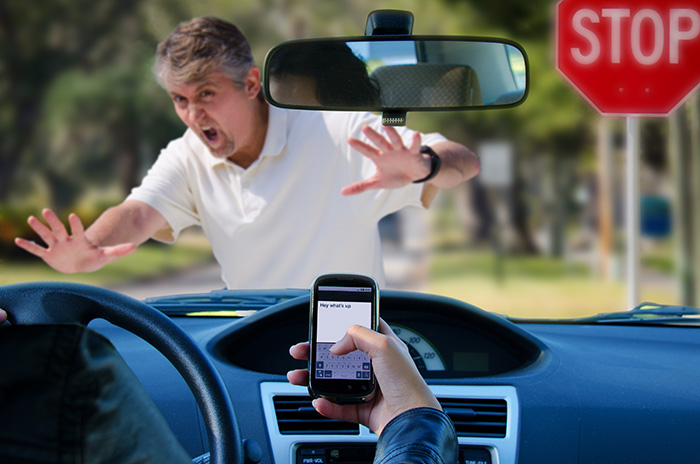 How Media Coverage of Car Crashes Downplays the Role of Drivers

It has been my contention for quite some time that the News and Tribune is a prime and persistent practitioner of this bias. These lapses may or may not be intentional. They just are.

First, the article explaining why.

I urge you to suspend your own biases for just a moment and read what Richard Florida has to say. After the article’s conclusion, I’ll paste recent examples from Facebook of the News and Tribune’s (at best) inconsistent scattershot approach — at times proper, at others ridiculous.

Note that the research referred to by Florida describes “pedestrians and cyclists collectively as ‘vulnerable road users,’ or VRUs.”

How Media Coverage of Car Crashes Downplays the Role of Drivers, by Richard Florida (CityLab)

Safety advocates have long complained that media outlets tend to blame pedestrians and cyclists who are hit by cars. Research suggests they’re right.

Since 2013, deaths among pedestrians and cyclists on U.S. roads have risen by nearly 30 percent and 14 percent respectively. Yet the public reaction to this spike in deaths has been fairly muted. Why?

One possible reason: road safety advocates have long complained that media outlets tend to blame pedestrians and cyclists who are hit by cars. A paper published earlier this year in a journal of the National Academy of Sciences’ Transportation Research Board offers proof that they’re right.

News stories overwhelmingly (but often subtly) shift blame onto pedestrians and cyclists, the researchers found. “Coverage almost always obscures the public health nature of the problem by treating crashes as isolated incidents, by referring to crashes as accidents, and by failing to include input from planners, engineers, and other road safety experts,” they write.

Despite its suggestion of inevitability and faultlessness, ‘‘accident’’ was the most commonly used term for crashes, occurring in 47 percent of sentences in articles’ body text and 11 percent of titles across the sample. News reports were also much more likely to use phrases like “a pedestrian or cyclist was hit by a car” instead of “a driver hit a pedestrian.”

(Journalists, it should be noted, have legal obligations to avoid placing blame on either party without an official determination by police or other authorities.)

Sentence structure and word choice matter. “A pedestrian was hit by a car” centers the victim getting hit—and as the authors note, “[p]eople tend to place greater blame on the focus of the sentence,” i.e., the victim. This kind of language de-emphasizes the agency of the driver. Additionally, many news reports used what the authors call “object-based language.” They explain:

Reports may describe a vehicle doing something rather than a driver (‘‘a car jumped the curb’’ versus ‘‘a driver drove over the curb’’). Object-based language obscures the driver’s role in the incident, thereby reducing blame. Observers tend to refer to people in cars using ‘‘object-based’’ language (e.g., car, traffic) but typically describe people walking or using bicycles with ‘‘human-based’’ language (e.g., bicyclist, pedestrian, person). This practice assigns unequal agency among the two groups.

Across the 200 articles that the researchers analyzed, 65 percent of sentences did include an agent—but that agent was the VRU in a full 74 percent of cases. And when a driver or vehicle was mentioned, sentences used object-based language (“A car hit a cyclist”) 81 percent of the time. “In other words, sentences overwhelmingly referred to an inanimate object as the actor [in a crash] rather than a driver,” the authors write, adding: “The use of object-based language was particularly jarring in the case of hit-and-run collisions where ‘the vehicle drove away.’’’

More than a quarter of the articles did not mention the driver at all, and some seemed to blame the victim for “darting” in front of a car.

News reports rarely mention the broader context behind car crashes involving pedestrians and cyclists. Safety advocates are right to be alarmed. Last year, more than 6,000 pedestrians were killed on roadways, up 3.4 percent from the previous year and the highest number since 1990. The fatality rate for cyclists jumped even higher (by 6.3 percent). This was during a period when overall traffic deaths (that is, including drivers) actually fell by 2.4 percent.

Very few of the articles in the sample brought up the role of road design or framed crashes as a public health issue, and none quoted experts knowledgeable in urban planning or traffic engineering. “This pattern of coverage likely contributes to the limited public outcry about pedestrian and bicyclist fatalities,” the authors observe.

Journalists are falling into common linguistic traps rather than consciously victim-blaming. But the problem is exacerbated by the shrinking of local newsrooms, so there are fewer seasoned reporters out there covering our deadly roads.

There are several steps journalists can take to cover road crashes more accurately. First and foremost, they should avoid referring to them as “accidents” and use “crash” or “collision” instead. “Because of the undue neutrality that ‘accident’ conveys, the editors of the British Medical Journal banned the use of the word” in 2001, as the paper notes.

Journalists should also be mindful of the tendency to blame the victim and to attribute agency to inanimate objects (cars). They should not let drivers off the hook, especially in cases of hit-and-run deaths. And they should look for patterns in pedestrian and cyclist deaths and contextualize their stories accordingly. Articles should probe issues such as road design, local failure to act on traffic safety initiatives (for example, Vision Zero policies), and broader public health. Experts can be helpful by acting as a resource for local news outlets covering this topic.

Ultimately, the study finds evidence for what many urbanists and safety advocates have been saying: The media is complicit in the growing American crisis of death by vehicle drivers. Better reporting practices are an indirect but important way to get to Vision Zero.

Before listing examples of muddled News and Tribune usage, allow me to offer all requisite condolences to the families of the child and woman from Pekin, both killed by drivers the past month. Anyway you cut it, they’re awful losses.

Permit me also to add that one way to help avoid future occurrences is to be precise in the way we refer to the situation, something the newspaper currently is struggling to achieve. Without knowing what exactly we’re talking about, how can we move forward to make it better? 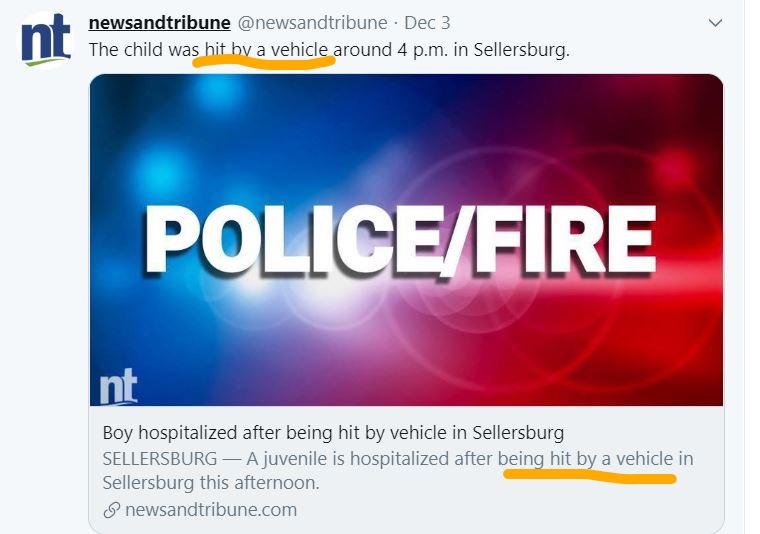 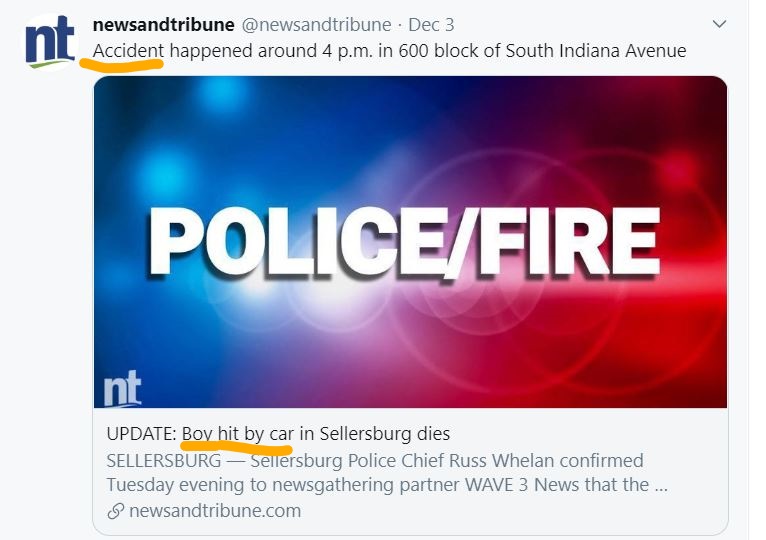 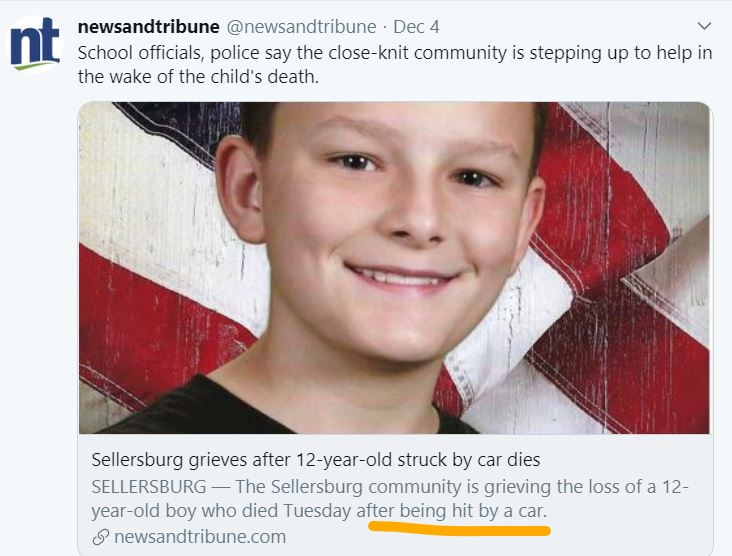 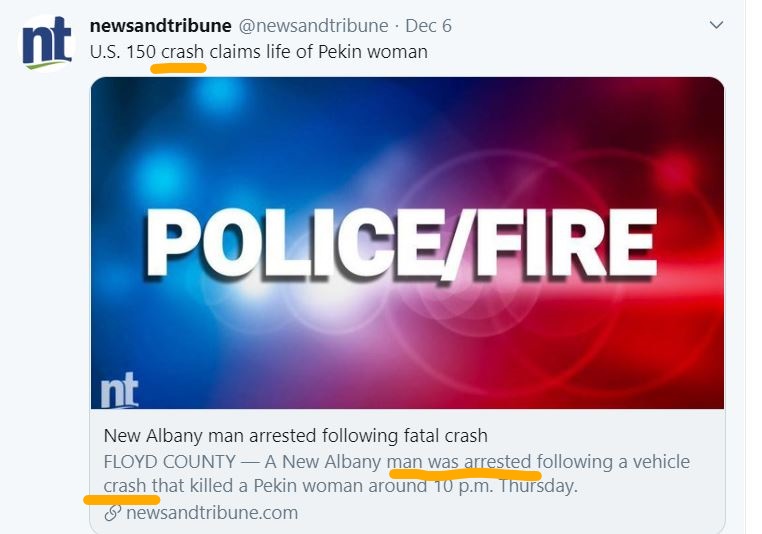 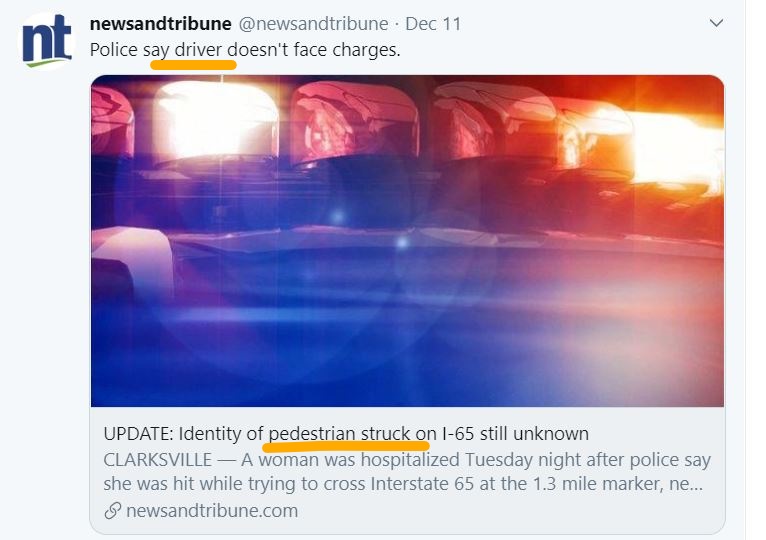 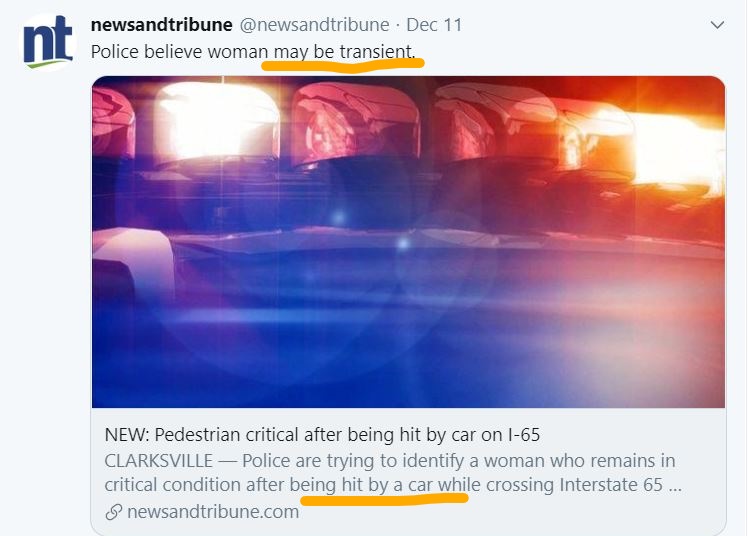 As an aside, what does the woman being a transient have to do with anything?

So: Crashes or accidents?

The newspaper gets it right … often, though not always.

Hit by a car, or hit by a driver? Interesting that in the case of two walkers being struck, both were hit by a car, not a driver. But twice when two vehicles were involved in a mishap, drivers/humans are mentioned as having been involved.

When I brought this up on Facebook, something on the order of 15 comments were hurled at me to the effect that walkers are always to blame because they shouldn’t be located where drivers are operating.

However the way I can recall being taught in driver’s ed, the driver bears a responsibility to be proactive above and beyond all minimum standards. Now it’s almost never the driver’s fault; that’s not the newspaper’s doing, of course, but there’s a great deal of complicity on the part of the nation’s prosecutors, perhaps owing to an inadequate statutory structure.

Back to Florida’s case. When’s the last time you heard anyone locally — newspaper, prosecutor, police, elected officials — do any of this?

“They should look for patterns in pedestrian and cyclist deaths and contextualize their stories accordingly. Articles should probe issues such as road design, local failure to act on traffic safety initiatives (for example, Vision Zero policies), and broader public health. Experts can be helpful by acting as a resource for local news outlets covering this topic.”

Our milieu at present is a sort of societal imperialism afforded by automobile centrism. As I’ve noted previously, driving is the last acceptable vestige of such imperialism in American life. Society properly frowns on the “N” word, sexual harassment and ableism, to name a few.

But we still willfully and almost proudly choose our words to absolve drivers who kill walkers, bikers and other non-automotive users of our planet.

Where does it say that drivers have MORE rights than non-drivers? Was that in the Declaration of Independence somewhere, and I missed it?

This narcissistic imperialism is the way most of us treat the undisputed hegemony of cars, isn’t it?

My point, then: If media generally (and I believe lazily) phrases driver and walker/cyclist interaction as the former’s interests invariably outweighing the latter’s, then at the very least media is doing nothing to help resolve the problem.

The preceding placards clearly indicate that the News and Tribune could do better in every way cited by Florida’s report.

Whether it cares to do so is something I wouldn’t be willing to bet actually happens.