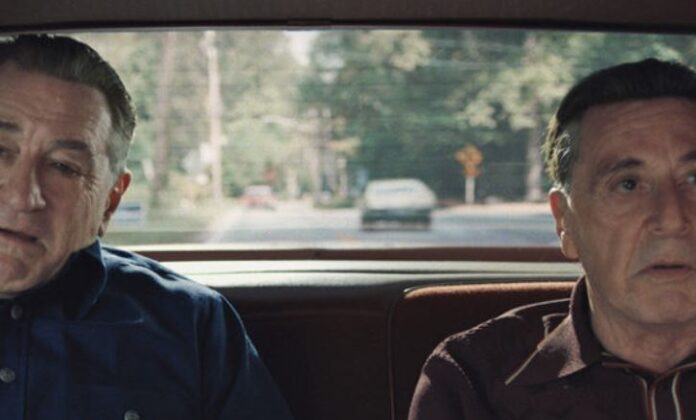 Let’s begin with a vital disclaimer: I am not, nor have I ever been, a movie “buff.” This said, as a reasonably well-educated human being, I’m by no means blind to the artistic merits of cinema. It’s just that film entertainment is seldom entertaining to me, and as it pertains to the famous query — well, 99 times out of 100, I’d just as soon read the book.

Unless it’s sci-fi, fantasy or a comic book. Hard passes, those.

It remains that nothing cultural exists in a vacuum, even those aspects I disdain, and so I’m alert to the times when items of little interest to me as yet retain their ability to teach.

This essay by John Semley at The Baffler is one such occasion. It’s about Martin Scorsese’s much-discussed “The Irishman,” for which I’ve read pans as well as praise. Semley goes deeper.

The ad hoc, often brutally violent manner in which the Teamsters, the mafia, etc., assert their authority seems, by today’s standards, almost quaint. Old fashioned racketeering is downright homey compared to corporatized forms of exploitation practiced by the modern capitalist-as-gangster. Think of scene in The Sopranos when Patsy Parisi attempts to shake down a chain coffee franchise, only to be spurned by a manager who explains that the diffuse corporate structure makes extortion essentially impossible. “It’s over for the little guy,” Patsy moans. It’s played as a joke. But is he wrong?

Granted, the rush towards an increasingly corporatized, homogenized experience of American life may well negatively impact entrepreneurial mafiosi attempting to secure protections rackets. But it also affects the whole culture. In a world where everything is Starbucks and Walmart and Disney movies and generic Howard Johnson’s hotels, where the experience of life is determined in board rooms by parties purely interested in bolstering their bottom line, where pretty much every aspect of existence increasing feels, in Martin Scorsese’s terms, “market-researched, audience-tested, vetted, modified, revetted and remodified,” the individual feels superfluous, a Frank Sheeran-styled leftover. The same is true of popular filmmakers attempting to ply their trade in a climate that, more and more, seems not only inhospitable to anything like art, but contemptuous of it. Even more than his searing Times op-ed, The Irishman, warts and all, mounts a persuasive case for the preservation and cultivation of such individual artists.

As to the specious claim that Martin Scorsese—with his uncredited voice-overs and sly cameos, his recurring cast of confederates, and his re-articulations of themes of faith under duress—constitutes his own “franchise,” well: that certain viewers fail to comprehend the difference between the expression of personal peccadilloes and the mandates of a mega-corporation, between art and commerce, speaks to the very breadth of the abyss Martin Scorsese stands against, onscreen and off.