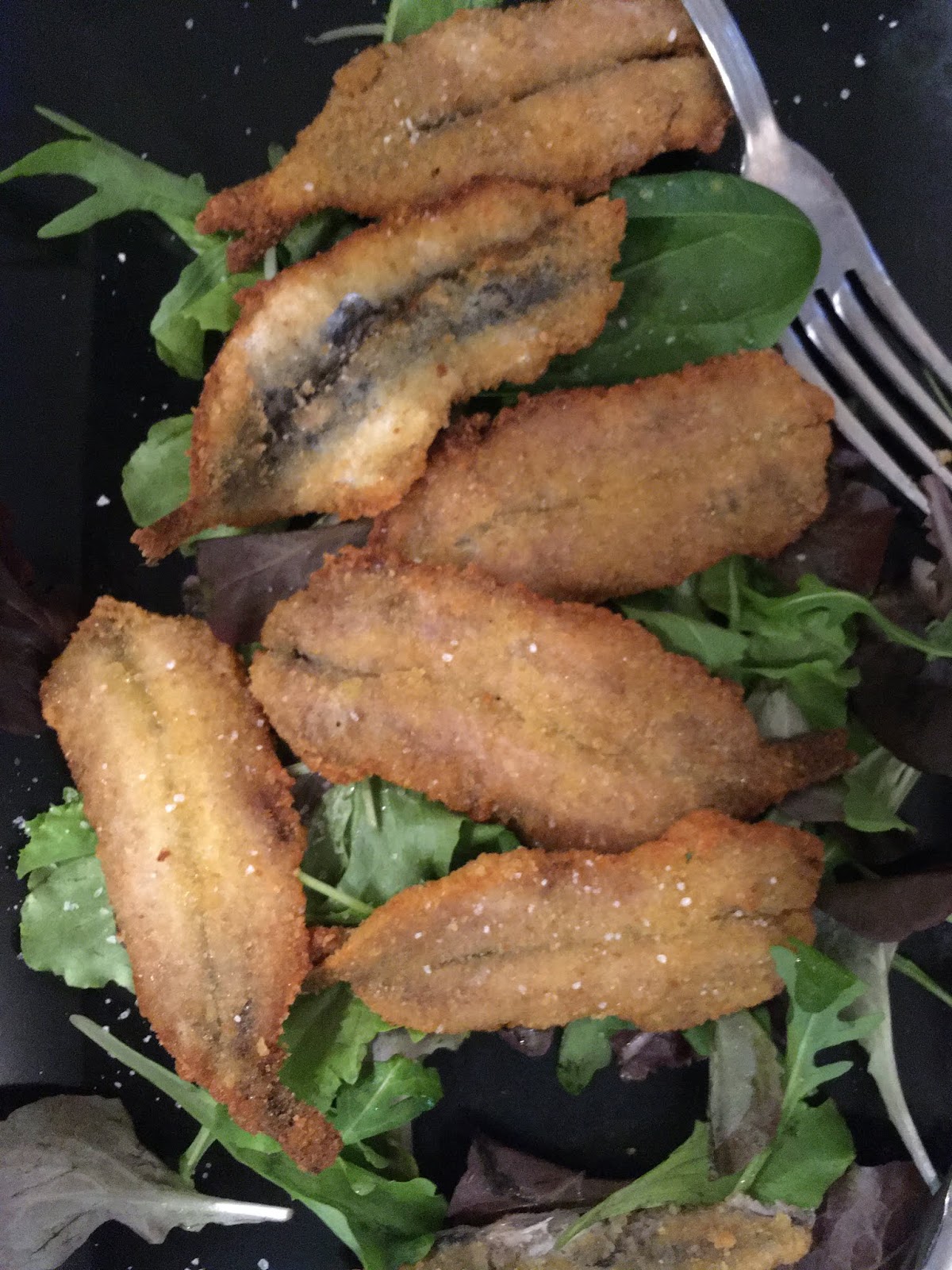 We’d been in Lake Bled for three days.

As divulged previously, our recent vacation underwent emergency modification when Slovenia’s Adria Airways went bankrupt at the beginning of October. We were compelled to rebook and fly via Zagreb rather than Ljubljana and Trieste, adding an extra evening (and train ride) on the front side and having little practical choice for the return except booking a transfer from Trieste to Zagreb by hired car and driver (more on this in Chapter 20).

During the course of 40 trips to Europe since 1985 totaling perhaps 2.5 years of accumulated time on the ground, I’d guess that maybe 24 to 36 hours of it in all (exempting short urban taxi rides) has been spent being driven around in an automobile. In fact I’ve never been behind the wheel in Europe, not even once. Consequently the most recent journey was very unusual, as we opted for a car twice in lieu of public transportation.

The second time was the Trieste-Zagreb connection. The first was from Bled to Trieste on Monday, December 2, via the Bled travel agency called Maya Bled Transfers, specializing in organizing day trips within a two-hour radius of Bled. This area of service includes an abundance of worthwhile sights and attractions. In our case, we just wanted to get to Trieste in the most efficient way we could, and while public transportation exists and is both usable and useful, it isn’t always direct or timely. 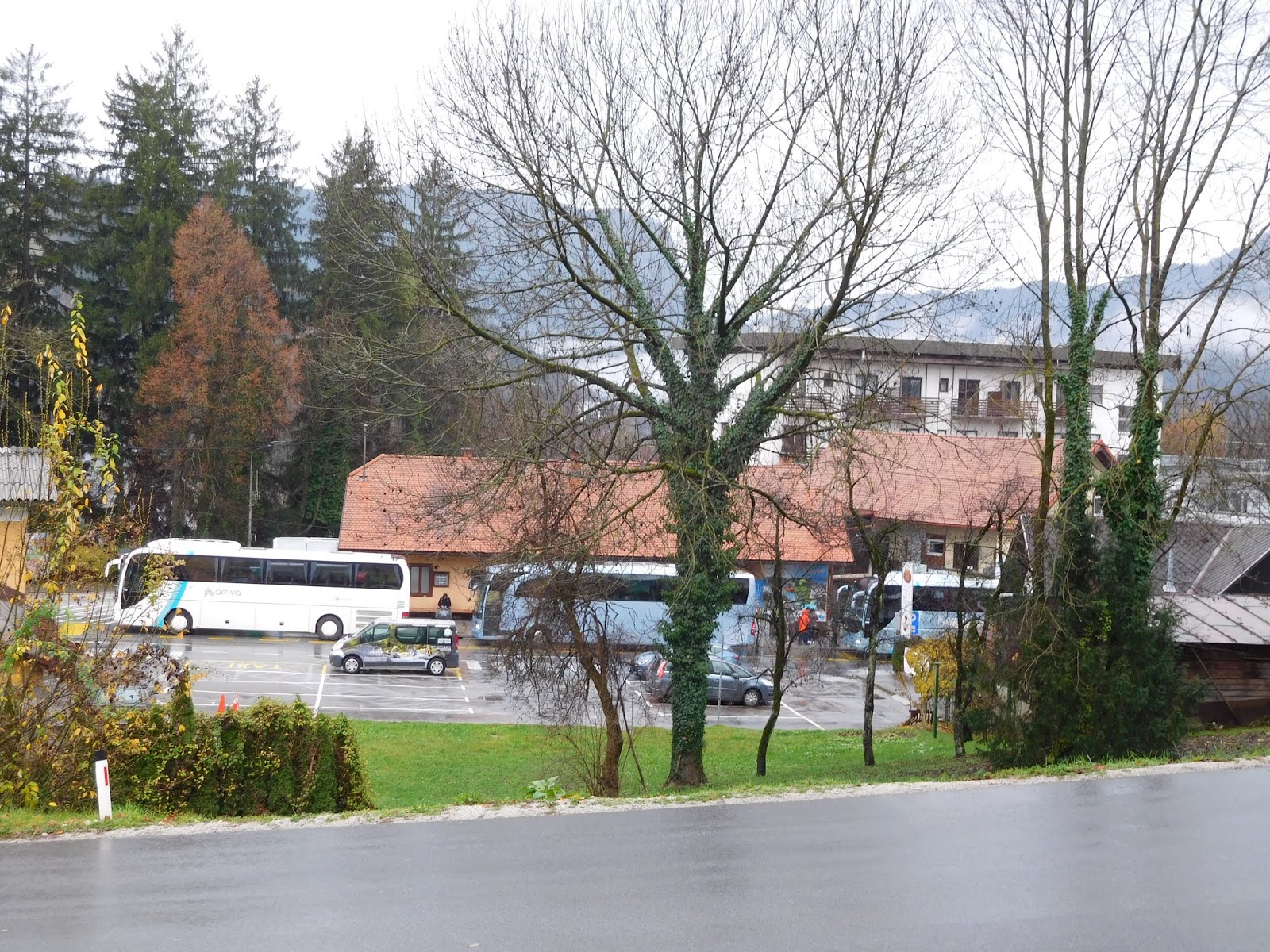 The owner Maya herself picked us up at 11:00 a.m. at our hotel in Bled, and we embarked on a rainy two-hour drive to Trieste by way of Ljubljana. 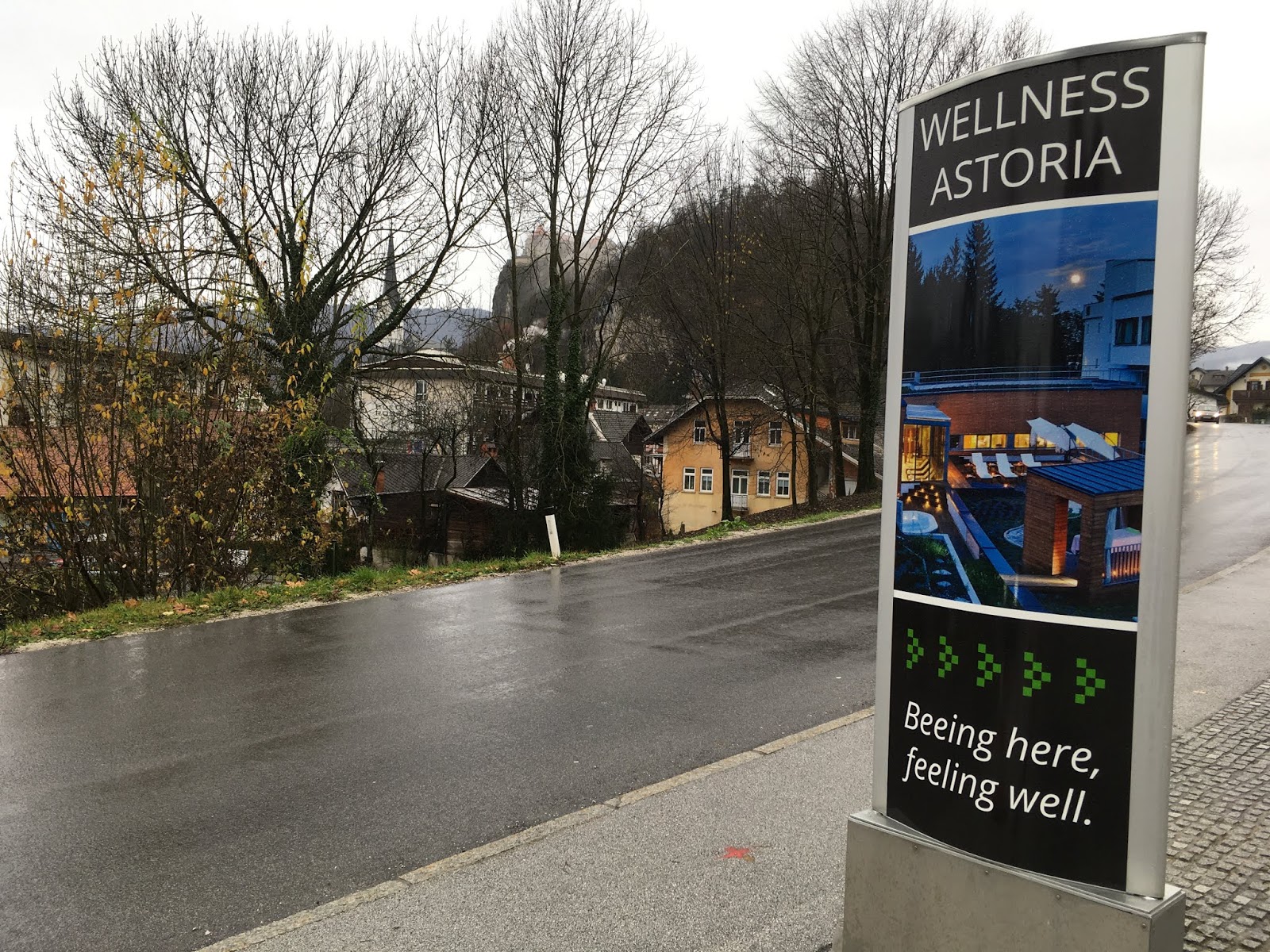 It was autobahn all the way. 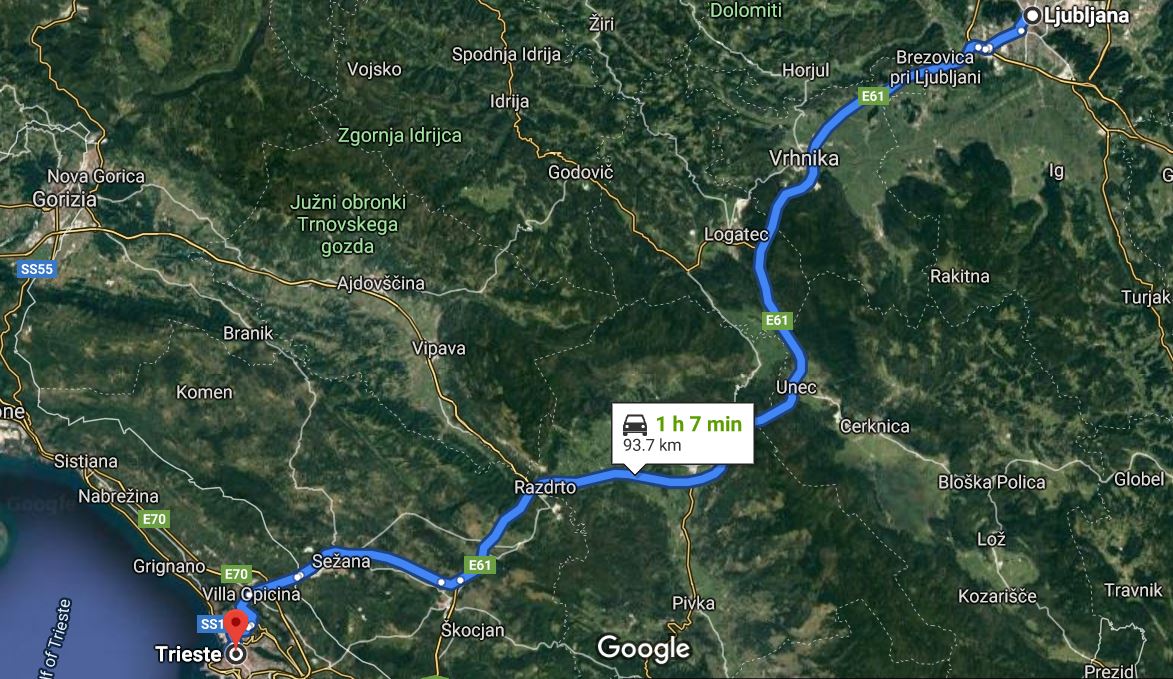 What had me weirdly motivated was the chance to cross the Karst plateau. 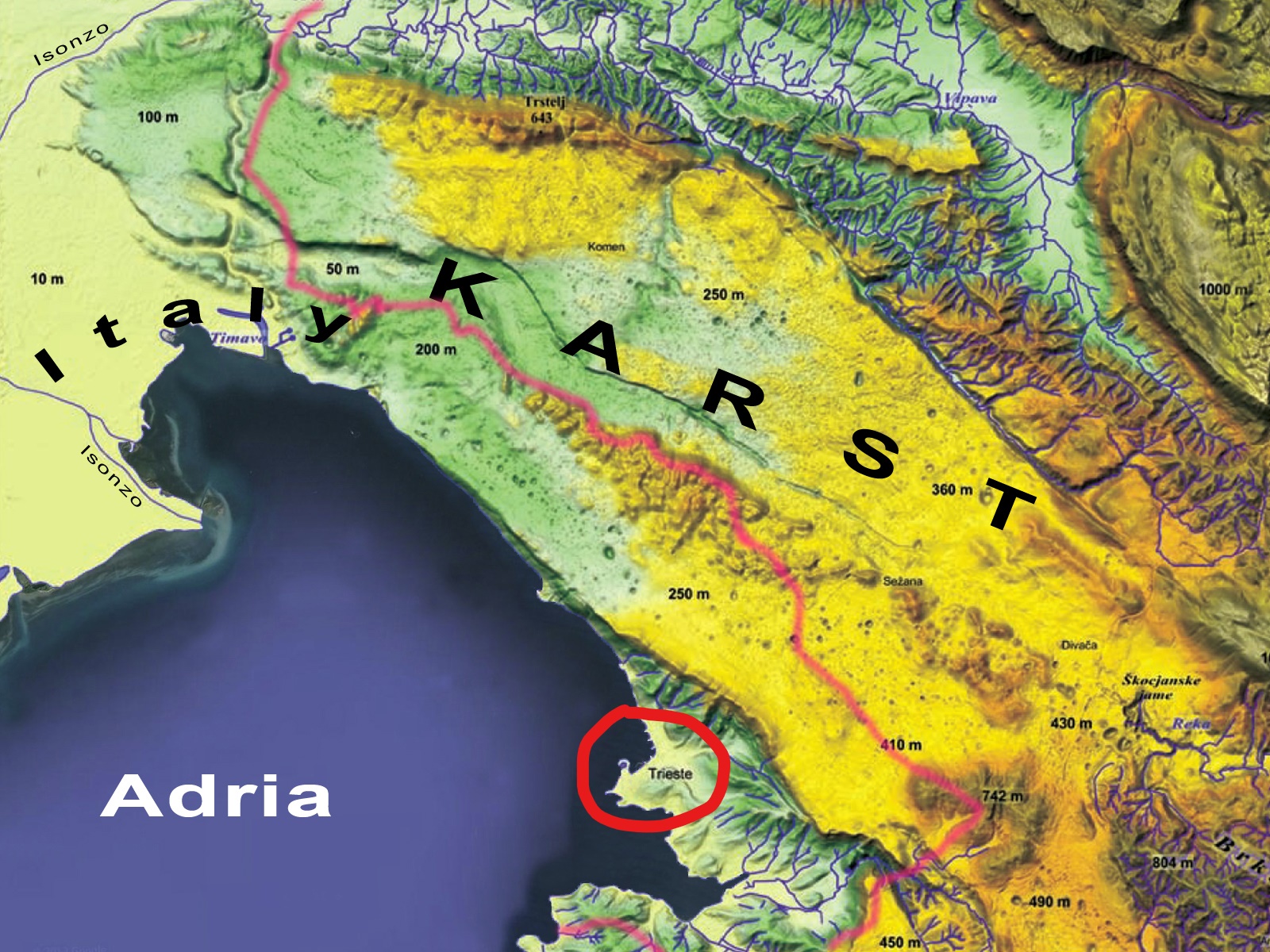 I’d traversed this terrain in the opposite direction back in 1987, but it was at night.

The Karst Plateau or the Karst region (Slovene: Kras, Italian: Carso), also locally called Karst, is a karst plateau region extending across the border of southwestern Slovenia and northeastern Italy.

It lies between the Vipava Valley, the low hills surrounding the valley, the westernmost part of the Brkini Hills, northern Istria, and the Gulf of Trieste. The western edge of the plateau also marks the traditional ethnic border between Italians and Slovenes. The region gave its name to karst topography. For this reason, it is also referred to as the Classical Karst.

Someday I hope to have the time to revisit Trieste in warmer weather and travel from the port city to Ljubljana, across the Karst, taking perhaps a week of short bus and train trips instead of an hour on the autobahn.

In her book Trieste and the Meaning of Nowhere, writer Jan Morris devotes a great deal of space to the centrality of the Karst to a sense of place in Trieste and surrounding areas.


She also writes evocatively about the limestone plateau above the city, the Karst – its name adopted by geologists to describe all such similar limestone topographies – an ‘elemental slab’ of rock and stone above the city, whose people have been hardened by history, climate and geology. It’s a Slavic world of partisans, the Glagolitic alphabet and Hum, the self-proclaimed ‘smallest town in the world’.

Traveling westbound from Ljubljana across the Karst, the modern the highway splits, with a southern fork departing to Koper, while the roughly westbound road to Trieste narrows as it approaches plateau’s end; suddenly just after the barely attended border crossing switchbacks merge seamlessly with suburban Trieste, gently descending to sea level. This has a strange effect on my psyche. Morris comments:

Melancholy is Trieste’s chief rapture. In almost everything I read about this city, by writers down the centuries, melancholy is evoked. It is not a stabbing sort of disconsolation, the sort that makes you pine for death (Although Trieste’s suicide rate, as a matter of fact, is notoriously high.) In my own experience it is more like our Welsh hiraeth, expressing itself in bitter-sweetness and a yearning for we know not what.

Maya handled the urban traffic with aplomb, having previously resided in Trieste. We said goodbye at the Hotel Roma. Check-in was easy, and by 2:00 p.m. we had set out for an orientation walk and maybe some lunch.

Ten minutes into it, the wind kicked up. Lo and behold, we’d arrived in Trieste just in time for our very first Bora.

The Bora is a wind that blows in a North North-Easterly direction from the mountains into the Gulf of Trieste. It blows intermittently with gusts that can occasionally be very strong. In Trieste the Bora is said to be “dark” when there is cloud, rain or snow, and “light” when the sky is clear.

Trieste and the Bora are inseparable. Trieste is the city of the Bora and the Bora is the wind of Trieste. When it arrives, the city wakes with an intense shudder. Trieste residents love it and endure it, but cannot be without it; when it isn’t blowing, they hope for its return. It is an essential element of this city, perhaps because it sparks real and intense emotions that few can ignore.

First the Karst, then the Bora. I was smitten.

It was still overcast, spitting rain, with the the Gulf of Trieste all choppy and dark. We had sandwiches and beers at a cafe staffed entirely by young Chinese women — I’m not jumping to conclusions, and it merely seemed unusual — then returned to the hotel to nap before undertaking the most difficult task that visitors to places like Italy ever seek to achieve.

Is there a restaurant open to serve dinner before 8:00 p.m.? 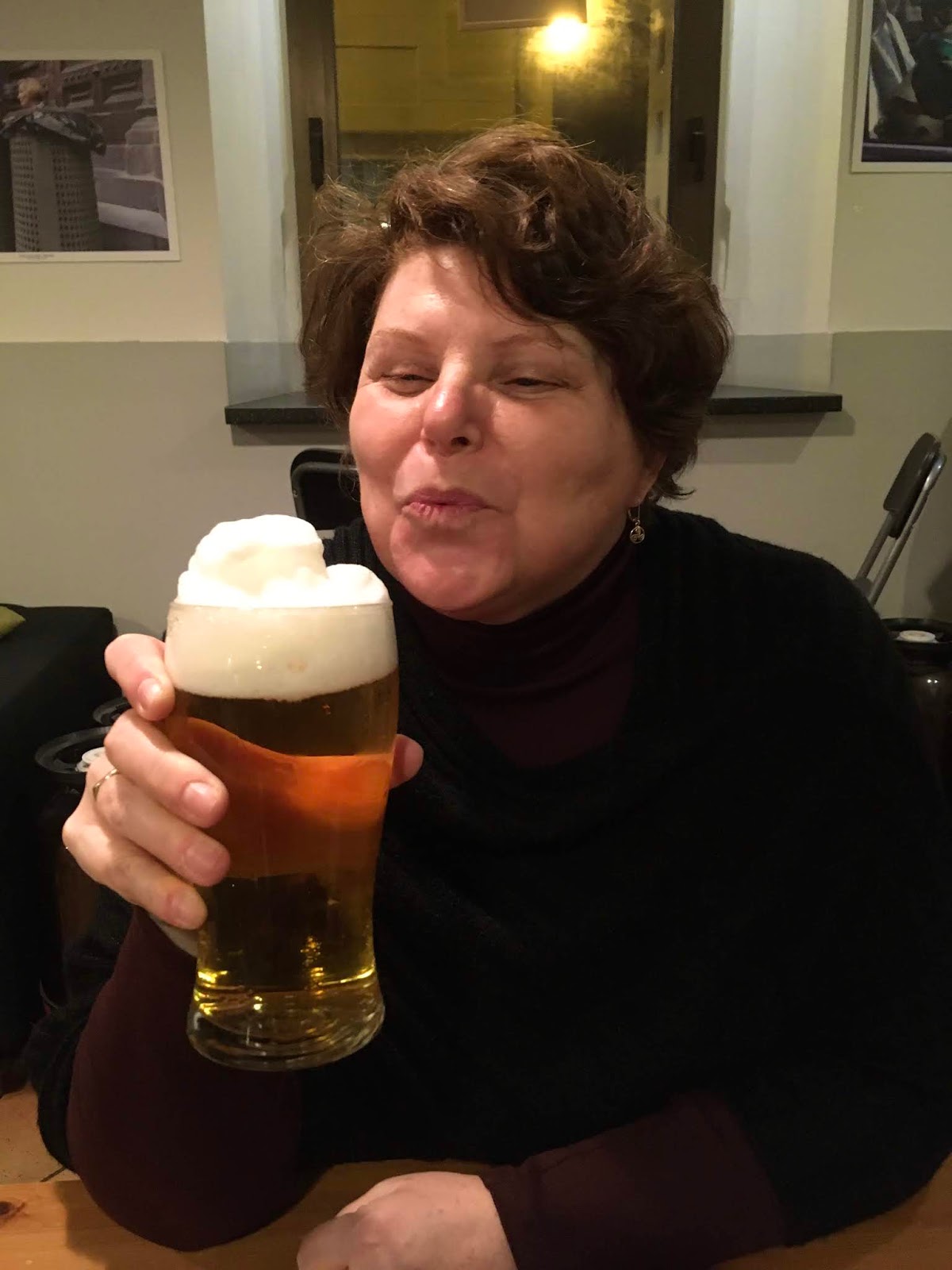 A couple doors down is Santé wine and food (see the sardines pictured above). It’s tiny, family-operated and chaotic, with the nightly menu on a chalkboard and a front-of-the-house interpreter who may just be having one too many shift drinks.

On Monday evening the rain passed through, but the Bora stuck around for 24 hours.

On a sunny Tuesday, we were off to explore Trieste.