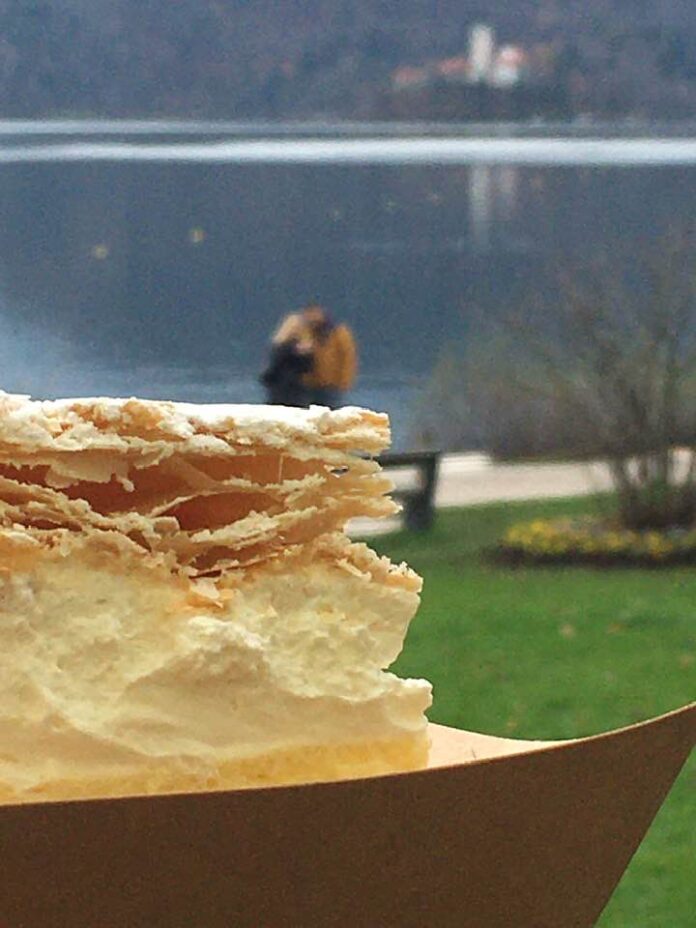 We took the train from Ljubljana to Lake Bled, and began eating pastry.

Not exactly, but probably close enough.

As an introduction to Lake Bled, which has been a fairy-tale destination for tourists of all walks of life for several centuries prior to Walt Disney’s birth, let’s take a close look at kremna rezina.

Standing placidly in the shadows of the Julian Alps, ringed by thick forests and guarded by a stern medieval castle, is Slovenia’s beloved Lake Bled. At its center is Bled Island, home to one most beautiful churches on the planet and the “wishing bell,” a 16th century chime consecrated by the Pope himself that is believed to grant the wishes of all who ring it.

There’s a reason Lake Bled is Slovenia’s most popular tourist destination: If you’re lucky, a swan might just float by as you watch the flat-bedded boats drift on the lake. Bled offers sweet memories to its millions of visitors, but the hungry ones will have something sweeter—Lake Bled cream cake.

Cream cake, characterized by delicate puff pastry atop layers of light vanilla cream and custard, is a dish that can be dated back to the height of the Austro-Hungarian Empire in the 18th and 19th centuries. Almost all the countries under the Hapsburg’s former reign still have a version of the cake: Bosnians enjoy krempita, Polish love kremówka, and Slovakians dine happily on their krémeš. The Slovenian version of cream cake is kremna rezina and, thanks to a recent granting of protected designation of origin status, it only comes from the patisseries at Lake Bled.

Signs advertising the celebrated cake appear the moment you shake off the short trip to the lake from the tidy Slovenian capital of Ljubljana. Almost every café on its shores serves up decadent slices of kremna rezina. But the staff at each of these eateries will advise you to try one sample it from the original source itself —the Park Hotel. This stately establishment has been serving up Bled cream cake since 1953, shortly after the arrival of celebrated pastry chef Ištvan Lukačević following the Second World War.

Lukačević, an ethnic Hungarian from northern Serbia, was undoubtedly well acquainted with the many variations of krémes and krempita throughout the region. Lukačević, also being a pastry chef, undoubtedly also utilized his skills as a master engineer, as all pastry chefs must be, when creating his celebrated version of the cake. It takes specific temperatures and proportions for chocolate to temper and bread to rise and puff pastry to puff.

Such engineering is evident in the kremna rezina. Everything is prepared under the guidance of the lucky number seven. The puff pastry is folded seven times and then left to rest overnight before baking and cooling again. The egg custard is cooked for seven minutes. Cooled, coated in a delicately sweetened layer of whipped cream, and dusted with powdered sugar, each cake is then cut into a perfect seven-by-seven centimeter square.

The staff at the Park Hotel take their job serving up the world famous cake very seriously. Up to 3,500 slices of it are sold on a given day, and the service team has pre-sliced, pre-plated portions constantly waiting at the pass for the next visitor to order it.

There’s even a Bled cream cake drive-thru at the hotel and an annual festival dedicated to the wondrous confection. Back in the 1970s, when Lake Bled froze over and attracted thousands of merry ice skaters, the hotel sold a record 7,000 cakes in a single day and, still using Lukačević’s original recipe, the hotel has produced more than 12 million cakes in the 62 years since it first graced the dessert menu.

Anyone from this region of Europe takes Bled cream cake very seriously. For anyone willing to look, recipes for Lake Bled cake can be found online to be whipped up in any corner of the globe. But without the Alps and the swans and the mist and the castle, it probably will not taste quite the same.

We had a late lunch on Friday at the Hotel Park, and capped off the meal with — you guessed it.

Those calories were burned off on Saturday, when we took a walk around Lake Bled.