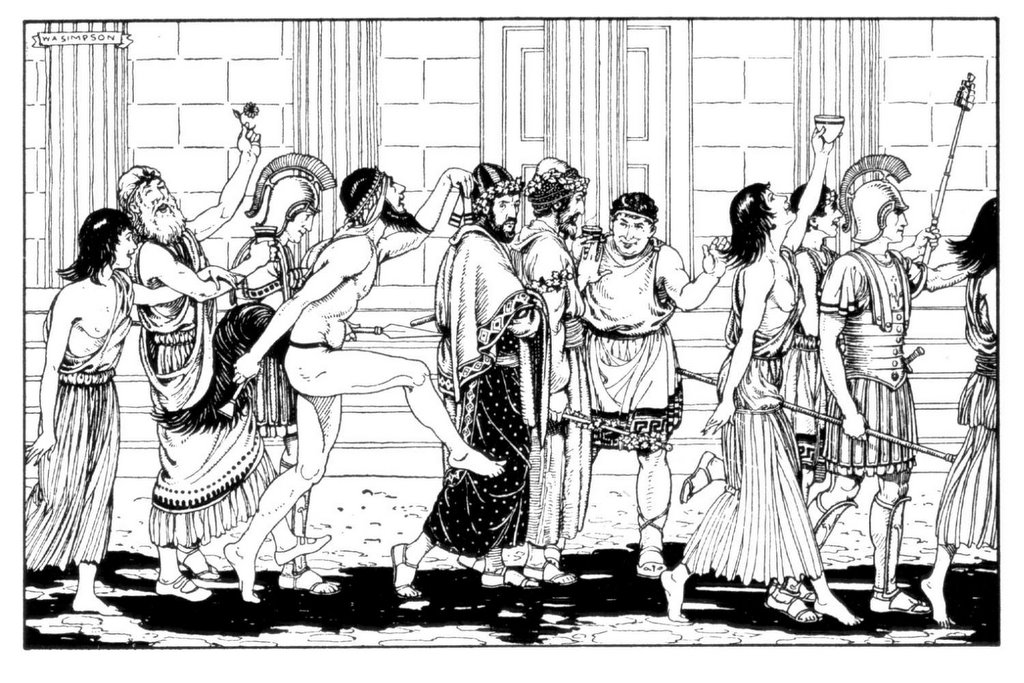 Occasionally this appears under the ON THE AVENUES rubric, but not this year.

Consider it a blogger’s fallback credo in times of holiday-inspired gluttony.

Over a period of years, I’d pause only momentarily to update the previous Thanksgiving Day column before rushing off to Vietnam Kitchen for the Baylor family’s holiday tradition of K-8 or clay pot catfish, and often both.

Ironically, this habit of appending something topical to regurgitated musings from the past soon came to resemble the procedure at family gatherings occurring throughout the nation on this uniquely American occasion.

Unfortunately, Vietnam Kitchen ceased being a factor in 2015, when the restaurant commenced a fresh tradition of its own and began closing on Thanksgiving Day. The year 2016 found us vacationing in Catania, Sicily, where I swapped Southeast Asian staples for Pasta alla Norma and Arancini di Riso (rice balls).

In 2017 we cooked at home, preparing for the task by going to the store — the package store, that is. No sense interfering with THAT most noble and enduring of traditions. I have been, and always shall be, a practitioner of the drinking arts.

Last year the Oriental House in Louisville gave Thanksgiving an entirely new Dim Sum meaning. In 2019, we’re in Slovenia. Sausages and beer will do quite nicely, thanks.

This isn’t to imply that I refrain from thankfulness.

Top billing goes to my wife Diana, who is my rock, followed closely by friends both old and new. They comprise a diverse extended family and are greatly appreciated.

With the advent of Pints&union last year, the family has grown. I can’t put into words what this pub-building experience has meant to me. In the aftermath of my career at NABC, it was understood that a stint in the wilderness would be necessary to purge and cleanse. Joe Phillips needed a rhythm guitarist, and here I am, doing what I do best. It has been redemptive, and I’m very appreciative.

New for 2019 has been my gig (since July) writing web site posts at Food & Dining Magazine, to which I’ve been contributing for many a moon. Big thanks to John Carlos White for the opportunity.

Of course, five years of post-NABC civic notoriety as a dissident and “non-person” has afforded me unprecedented opportunities to learn. It often has felt like a graduate degree without the onerous tuition — and I’m grateful for the education. Any day is wasted without an opportunity to learn, and a whole new stack of books awaits.

Through it all, I’m constantly reminded of my good fortune thus far on this planet. There has been lots of dumb luck, and I’ve also “made” some of my own breaks. Serendipity and opportunism both have played roles. I’ve worked, worried, absorbed and forgotten in equal measure, with time still on the clock for restorative bore-assing.

For a quarter-century, until the forever volatile ownership coalition finally dissolved, I was able to make a living from drinking beer, most often in my natural preferred habitat of the public house. It was a business, but at the end of the day intangibles and ideas mattered far more to me.

They still do, which is another reason the Pints&union and Food & Dining positions are such good fits.

Being able to educate and challenge always was the real motivation, because the pub truthfully remains the poor man’s university, and the pen a means to influence. I tried to make my former workplace perform this function as often as humanly possible in both ways, and I’m doing my level best to reformat the experience again.

One thing I don’t regret at all is the absence of filthy lucre. There were times when a higher percentage of it might have been useful, but I remain a reluctant capitalist.

I’ve never been rich and likely never will be, but I’m delighted to stand on my record when it comes to teaching, agitating, creating lasting memories and trying to get to the heart of the matter – whether it’s beer, food, localism, street grids, running for mayor or all the above, tied together as they should be, sensibly and coherently, because absolutely nothing exists in a vacuum.

Legacies needn’t depend on wealth. They’re about doing what you can, while you can, as best you can, and producing a body of work impervious to calculations of interest, percentages and historical revisionism. Twenty years on, if someone smiles because they recall good times at the pub, then it’s the best return on my time and investment.

Especially with respect to Pints&union, I truly believe the best is yet to come.

As an aside, there aren’t many parts of my first career in business that I genuinely miss. One morning I awoke and knew it was time to go, and so I went.

However, I do miss some of the crazy things we were able to organize during the “imperial” period, such as Saturnalia, the annual celebration of winter seasonal and holiday beers. From 2004, Saturnalia was calibrated to begin each year on the day after Thanksgiving, and to run through Christmas. I liked it better than Gravity Head.

In pre-Christian Rome, Saturnalia was the annual winter solstice celebration coinciding with the feast days for Saturn (the god of sowing and the harvest), Consus (god of the storage bin) and Opa (goddess of plenty). Many of our contemporary winter holiday traditions derive from Saturnalia’s pagan roots, including the hanging of wreaths and garlands, donations to the needy, prayers for peace, time off work to be enjoyed with family, and of course eating, drinking and merriment.

There was a resonance to our Saturnalia observance because so many fine people return home for the holidaze. It always seemed to me that winter seasonal beers provided the most suitable accompaniment to the joys of reconnecting, sharing war stories, and remembering those who no longer are with us — the folks I’m very thankful to have known while they were here on earth.

As this column heads for the stretch, it’s time for some boilerplate.

A few years ago in the Jeffersonville Tom May Good News Bugle, I made an observation: There’s never any better time than Thanksgiving for an iconoclast’s thoughts to be made public.

Naturally, it’s futile to expect anyone to read my outpouring of words today, on the holiday itself. Given the inability of many New Albanian readers to wade through my commentary without scratching their heads in confusion, it’s plainly impolite to ask them to waste valuable time gnawing leftovers to engage in a frustrating, household-wide search for seldom-used dictionaries and thesauruses.

But I am nothing if not stubborn, so let’s revisit the notion of “iconoclast”:

1. A breaker or destroyer of images, esp. those set up for religious veneration (like those chintzy, totalitarian-style, mass-produced photos of a stately Jeff Gahan that we’ll all soon be expected to place strategically behind our desks and at the entrance to area-wide pay toilets).

2. A person who attacks cherished beliefs, traditional institutions, etc., as being based on error or superstition … rather like your humble correspondent.

Regular readers know my heroes have always been iconoclasts.

From Socrates through Tom Paine, and not exempting 20th-century polemicists like H. L. Mencken, there’s nothing as thrilling as an iconoclast taking a headlong swipe at unexamined assumptions.

The most wonderful aspect of iconoclasm is that personal dissipation does not pre-empt the message. It actually may enhance it.

Consequently, it is my duty to remind you that Thanksgiving, while perfectly enjoyable from a hedonist’s standpoint, and wholly conducive to this bibulous trencherman’s standards, actually stands for something of importance.

This certain “something” isn’t the prevailing pastel-colored viewpoint of Puritans and Natives merrily gathering for a quaint New England picnic, pausing only occasionally from the consumption of corn chowder and non-alcoholic cranberry wine to pray before their respective deities.

The need for apologetics aside, and whether or not Squanto miraculously facilitated a peaceful first Thanksgiving at Plymouth Rock, the subsequent history of the white man on the North American continent featured the unabated slaughter of Native Americans, incessant pillaging of the environment, and an exculpatory doctrine of “manifest destiny” interwoven with prevailing religious belief, as intended to ease the consciences (if any) of those pulling the triggers.

We’ll leave the open approval of African-American slavery, emanating for many generations from Christians occupying American pulpits, for another day of faux “thanks.”

In the context of real American history, and to the exclusion of mythology and wishful thinking, the holiday we term “Thanksgiving” is ironic, to say the very least. I prefer reflections on all human history to be in accordance with the record, and as events actually occurred, without the tidying impulse to obscure and sanitize them.

I accept that people in all places and times do what they can with what they have, and believe that the best we can hope for is to learn from the past in the hope of learning worthwhile lessons and avoiding mistakes. In my opinion, the worst error of all is to misrepresent the historical record to justify theological needs.

Like what happened to Jeff Speck’s traffic study when it finally was “implemented” beyond recognition for maximum monetization by New Gahanism’s resurrected, non-book reading Orwellian cadres.

Yes, I observe Thanksgiving, too. It’s just that I do so realistically, dispensing with personality cults and fake facts.

Meanwhile, America’s Christmas shopping season started on July 4, and it will reach a crescendo the day after Thanksgiving, which frenzied pop culture vultures have dubbed Black Friday.

Pavlov’s overworked and fever-ridden mutt can be expected to salivate continuously as university economics school analysts (I’m gazing at you, IU Southeast) read imported tea leaves to guess whether holiday season retail sales will be sufficient to keep Wal-Mart, Best Buy, Home Depot and Meijer’s solvent for another year as Amazon’s dark clouds continue to roll ever closer toward a One Store State.

I prefer the idea of Plaid Friday, and shifting my shopping to independent small businesses. But at least there’s food on Thanksgiving, even if the Vietnamese joints are all closed. Iconoclasm aside, I always enjoyed the traditional Norman Rockwell bird-spread. Cooking it at home simply isn’t something we care to do, hence our perennial “alternative” holiday fixation.

After all, to each his and her own tradition. May yours be peaceful, and not harmful to others.

As they say in Haiphong: Một hai ba, yo! The phrase means “cheers” — or maybe it’s “someone bring me leftovers.”