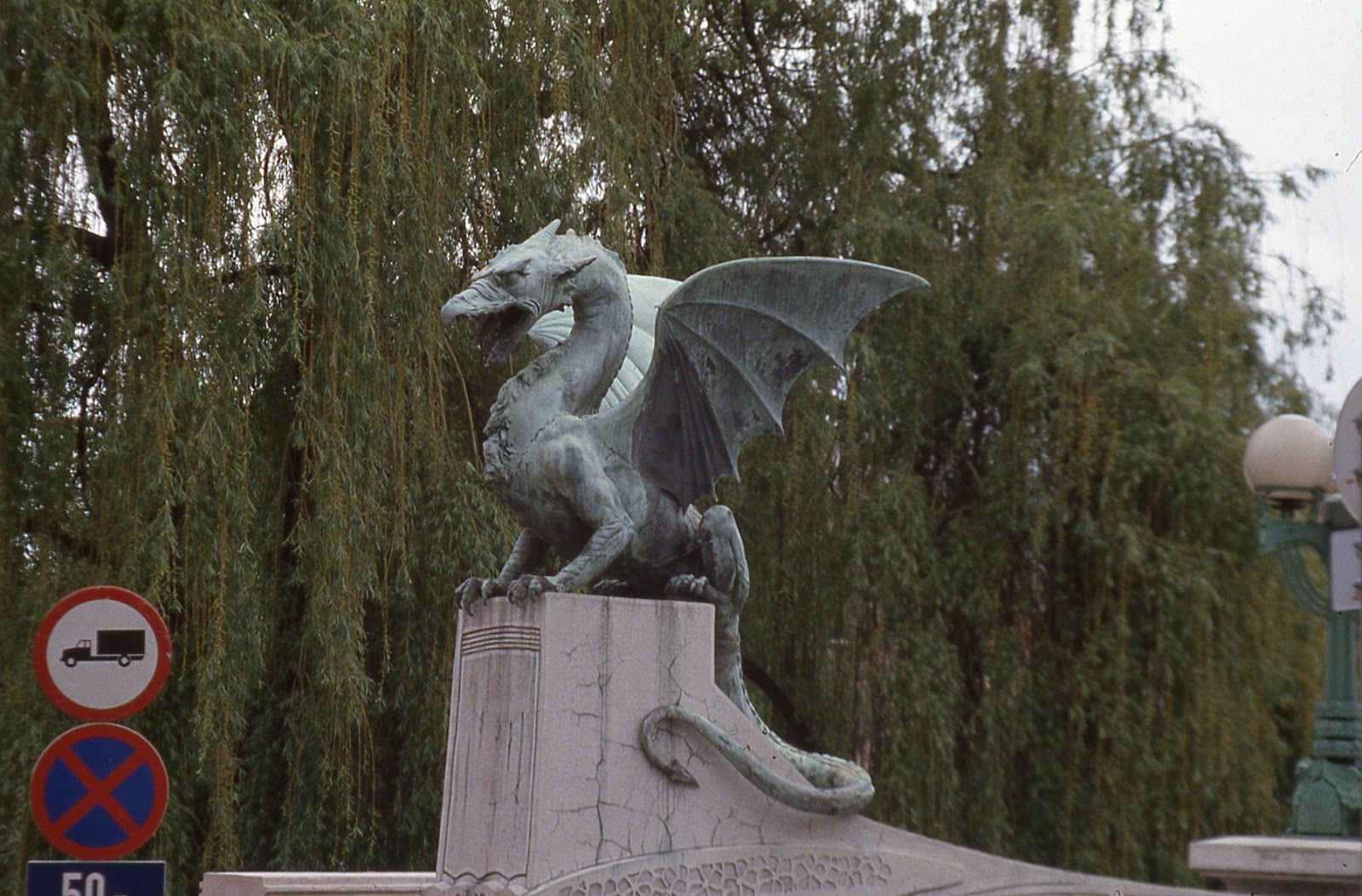 The following was posted at NA Confidential on May 25, 2017 as part of a series in celebration; it was the 30th anniversary of my lone visit to the country formerly known as Yugoslavia, and an excuse to finally scan those slides.

From May 15 through May 31 in 1987, I visited five Yugoslav “republics” that are independent countries today: Slovenia, Croatia, Bosnia-Herzegovina, Serbia and Macedonia.

The sixth republic, Montenegro, wasn’t on my 1987 itinerary and neither was Kosovo (ethnically Albanian but part of Serbia at the time). However, during a day spent in the city of Ohrid, the presence of Albania could be vividly sensed, lying twelve miles away across the stately waters of Lake Ohrid.

Other Yugoslav cities that I passed through were Zagreb, Sarajevo, Mostar, Kardeljevo (now Ploče), Dubrovnik, Belgrade and Skopje. I exited Yugoslavia at the Bulgarian border as the only American on a bus bound for Sofia, somewhere around Gyueshevo.

Even for those with a moderate grounding in European history, these place names still appear mysterious and vaguely eastern. Yugoslavia was a multi-ethnic country made up of Christians, Muslims and Jews, and speaking a half-dozen languages (in two alphabets). Over the centuries, the inhabitants of these regions were the subjects of various foreign empires, including Rome, Venice, Hungary, the Habsburgs and the Ottoman Turks.

The cultural kaleidoscope was calculated for sensory overload, and looking back on these scant three weeks in my life, my time in Yugoslavia seems almost otherworldly. Naturally I wouldn’t trade it for anything, and yet I’m fully aware of how much was missed or only partially digested. In truth, I was still in training, learning the ropes.

However, one thing about Yugoslavia has stuck with me. The people I met were amazingly hospitable, unfailingly friendly and invariably helpful to this flailing American in spite of the many language and cultural barriers.

These pleasant memories made it all the sadder for me during the 1990s, amid the murderous, decade-long Yugoslav civil war, when numerous barroom discussions began or ended with someone asking me if I could see the conflagration coming, all the way back in ’87, when I was there.

But those men and women who’d been so nice to me – what had become of them? I didn’t know then, and still don’t. It’s a melancholy feeling, indeed.

For a local’s guide to Ljubljana in 2019, go here. This story will be continued tomorrow.

On Friday the 15th of May in 1989, I began the day at a hostel in Perugia, Italy, before embarking on three legs of a single day’s rail journey: Perugia to Florence, then to Venice, and finally Trieste.

To this day I can’t explain why I didn’t spend the night in Trieste before crossing the frontier to Ljubljana, capital of the Slovenian republic in the federation called Yugoslavia. Trieste later came to be a bucket list destination, but my first time was a wash, with barely time to walk a bit and grab a bite of street food (pizza, or something like it) before making the decision to press on.

I returned to the train station in early evening slightly glowing from some cheap Italian table wine scored from a shop, and promptly suffered the first noticeable lancing of an otherwise hopeful seaside mood.

Rounding the litter-strewn corner to an isolated side platform, I saw the rusted, elemental Yugoslav train waiting for the ride to Ljubljana. There were only three passenger cars, and they had no frills left to give.

In 1985, my first brief glimpse of communism had come from the vantage point of a sleek Finnish tour bus. Now this unadorned vintage Balkan rolling stock hinted at what was to come during the next few weeks roaming southeastern red-starred Europe.

A port and border town, Trieste’s geographical resting place was much in dispute following World War II. Yugoslavia’s Marshall Tito (Josip Broz, a Croat by birth) eventually acquiesced in his demands, and Trieste remained Italian, which it had been for only three decades after forcible detachment from the defunct Austro-Hungarian Empire at the close of the previous war.

Consequently, a sizable population of ethnic Slovenes living in Trieste’s suburbs and hinterlands became Italian citizens overnight. Their descendants appeared to be my fellow outbound weekend passengers, probably visiting relatives on the other side.

They began boarding the so-called “express,” many encumbered with multiple bags, bundles and boxes. No one was speaking Italian. It was almost as though the dilapidated Trieste rail siding was an extension of Yugoslav sovereign territory.

The train finally began rumbling slowly to the east. We lurched uphill toward the border, into Trieste’s famous karst hinterland (that’s a limestone topography) with those darkened mountains ahead for which the Balkans are both celebrated and feared. It all seemed less imposing when brightened by a setting sun.

At the border, my passport merited little more than a cursory glance. The visa inside was duly stamped by the youthful, uniformed guard with the rifle slung over his shoulder. It all seemed unusually relaxed, a condition not always to be repeated in the Bloc during my journeys later that summer.

The locals had it somewhat harder, and their packages were inspected closely. Once inside Yugoslavia, the train began emptying as we stopped in one small town after another. After three and a half hours, just shy of 22:30, the express that never was shuddered to a halt at Ljubljana’s central station.

Excited, I bounded down the worn metal steps into a warm and humid night, hoisted my pack, turned to follow the crowd, and was greeted by a full-scale reprise of an Animal House bacchanal, minus the togas.

Unsteady chorus lines of drunken young men were chugging bottled beer, the liquid streaming down their faces as they stumbled across the rails singing verses of unknown songs, with nary a female in sight.

To my right, a group of them were merrily urinating on a rail yard wall. Some were shirtless, half-heartedly wrestling. Others were projectile vomiting.

Although obviously harried by the mayhem, train station personnel looked on it with remarkably equanimity, as though the performance had been seen many times before.

And so it had.

Two days later while in route to Zagreb, a seismologist from Skopje explained that what I’d witnessed was a semi-regular occurrence throughout Yugoslavia. The revelers were the latest cohort of military draftees, celebrating their final night of freedom before shipping out to serve the motherland for two years.

Upon arrival in Ljubljana, I didn’t know any of this.

Rather, standing on the platform transfixed and appalled, watching the crazy party, a question occurred to me.

Why the hell had I come here?

As throngs of thoroughly inebriated future Yugoslav soldiers milled through the debris in Ljubljana’s otherwise unoccupied train station, I found myself an object of curiosity and attention, perhaps the lone western backpacker.

It must be said that the scrutiny wasn’t threatening, and the general mood remained one of revelry. Gingerly picking my way gingerly through the ranks of the fallen, taking care to avoid evil smelling puddles, I scanned the strange directional signs in an effort to locate a safe path into the station’s nerve center.

Two of them stood out: “Informacija” (information) and a pictogram of bank notes and coins.

Money was the first priority, as I’d passed from lira to dinars. In pre-Euro times, every border crossing required exchanging the previous nation’s currency into the next one. In 1987, there were few ATMs even in Western Europe, much less the East Bloc. Similarly, the credit card in my neck pouch would be almost useless in socialist locales outside of special “hard currency” shops.

Back then, you changed money the old-fashioned way, with actual dollars or American Express traveler’s checks. The man behind the only populated window miraculously spoke a bare minimum of English, and was able to answer my questions.

Yes, he would cash a traveler’s check.

No, he could not help me find accommodations.

No (gesturing at the cacophony), the baggage check room was quite full.

Bureaucratic scribbling followed, and he began slapping down those one thousand dinar notes, again and again, until the pile was at least two fingers high.

Public transportation had shut down, and so my search for lodgings commenced on foot. There was a chronic scarcity of streetlights, but I managed to navigate a half-mile to the first university-affiliated youth hostel listed in the guidebook.

There were cobwebbed padlocks on the door.

The second hostel defied all navigational efforts. It was dark, the streets were deserted, I was soaked with sweat and it was well after midnight. Reversing course back toward the train station area, I made for the first standard hotel.

The night clerk eventually responded to repeated buzzing, sleepily offering non-negotiable terms of one night in a single-bedded room for roughly a quarter-inch of my hard-earned dinar wad, or three times the rate I expected to pay in a hostel. Exhausted, notions of showers and naps were cheering. It was a splurge — and a deal.

On Saturday morning, flooded in blessed daylight, the youth & student travel bureau was easily found, and a less inexpensive bunk booked in a three-bed student hostel toward the city center. The day was free for exploring Ljubljana — sister city of Cleveland, Ohio — and drinking a few delicious Union lagers.