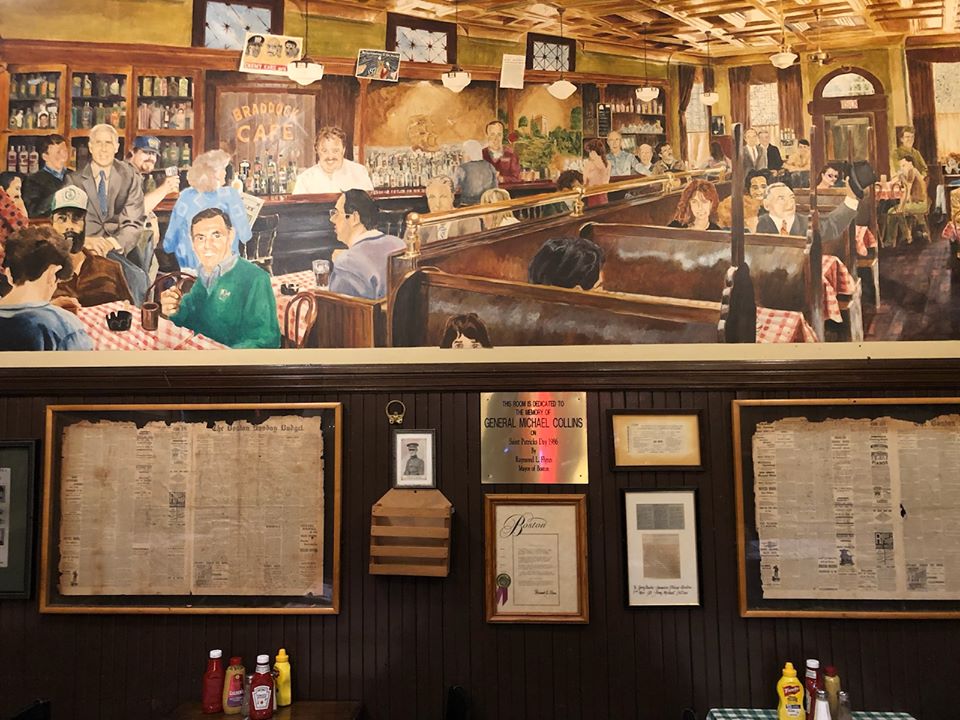 NPR’s story is dated October 6. The 137-year-old pub closed not long after.

Bostonians Lament Loss Of 137-Year-Old Pub And Its Trove Of History, by Aaron Schachter (NPR)

Doyle’s Café, which has been serving up drinks and food to locals, famous politicians and Hollywood celebs in Jamaica Plain since 1882, is expected to close its doors by the end of October. Its owner says he can’t afford to keep the business running in the Boston neighborhood.

The landmark pub may not be fancy, but Doyle’s is the kind of place where you might find a governor hanging out.

When your liquor license is worth $450,000 even before the property is appraised, it’s hard to make a compelling argument for carrying on. The Save Doyle’s Cafe page at Facebook tells the story of what has happened since Doyle’s ceased. There was a memorabilia auction, and a measure of hope remains.

The owner’s broker has agreed to let us keep the mural on the wall and it is our hope that this will serve as an inspiration and motivating force to keep this effort going! Many of the other people participating in the auction have said they would lend their memorabilia to a future owner WHEN Doyle’s someday reopens.

It may (it will, due to ADA compliance renovations) take a while, but we are very optimistic that Doyle’s will reopen in the future. It makes no sense to knock down the building. The easement from Boston Water and Sewer for the land underneath the building limits development on that corner lot to one story due to the Stonybrook conduit that flows underneath. We have also been told that the current owner is seeking a new buyer for a multi-use development that includes a restaurant.