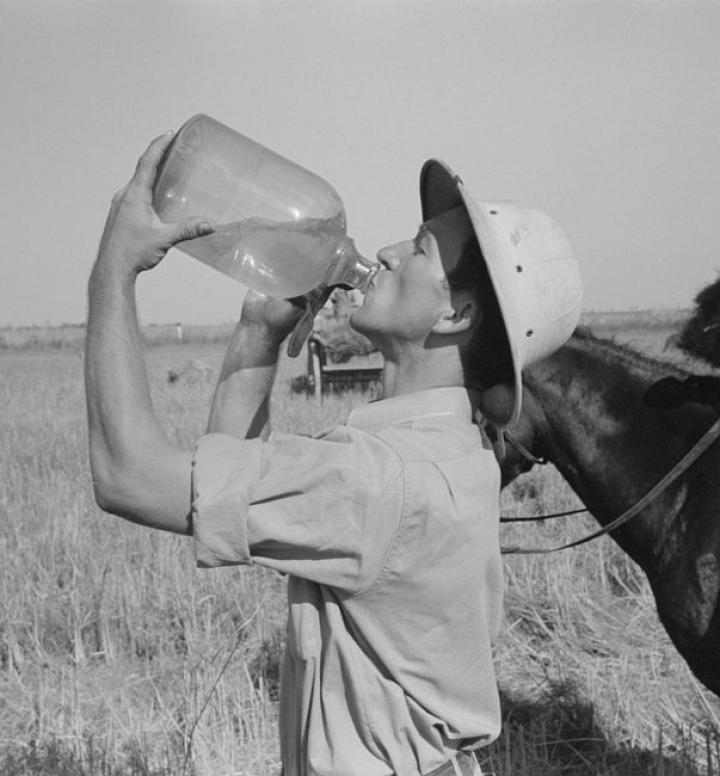 Thanks to my friend MB for posting on Facebook about switchel, a bit of Americana with which I’m largely unfamiliar. It seems to have been intended as non-alcoholic in the main, but of course a bit of additive never hurt.

Delving deeper, I see there are dozens of commercial varieties available these days, with spices, fruit and all the attendant foo-foo to appeal to those consumers who are unfamiliar with the concept of “authenticity.”

Health faddism and health fascists are annoying, but couch switchel in terms of history and I’m all ears. What strikes me about switchel is that it’s much like the impetus for homebrewing, at least back at the start when you found a recipe that tasted good and kept making (and drinking) it.

… And if you suffer at all from allergies, you’ll want to know about switchel.

Also known as Harvest Drink, Harvest Beer, Swanky, Haymakers Punch, and a host of other aliases, switchel is a refreshing beverage that has been fortifying the American immune system since at least the founding of this nation.

At its most basic, switchel is water, cider vinegar, ginger and a sweetener (molasses, honey, sorghum, etc.). Rum, whiskey, brandy or hard cider can be added to give it a bit more oomph. I’ve seen some recipes, particularly in the south, that add cayenne pepper to the mix as a cold cure.

One of the earliest written references to switchel comes from Philip Freneau, known as the “Poet of the American Revolution,” in his 1789 poem “On the Demolition of an Old College.” Describing an incident at Dartmouth College where a group of students tried to take down an old log building, Freneau suggests switchel is not boozy enough to lead a man to destruction:

Relent, relent! to accomplish such designs
“Folks bred on college fare are much too weak”
For such attempts men drink your high-proof wines
Not spiritless switchel and vile hogo drams
“Scarcely sufficient to digest your Greek–“

Each cook had their own recipe for switchel. The amount of each ingredient depended largely on the personal tastes of those making it, and exact measuring wasn’t necessary – one would simply add more of something until it tasted right. Sweetners depended on what was available. Molasses was more common in New England where the rum trade from the Carribean made the black syrup a staple on pantry shelves. In the frontier, switchel would often be made with honey, and in the south, sorghum would be used to soften the beverage’s bite …