Back in 2011, when the city of New Albany was preparing for its gala Bicentennial celebration in 2013, the guiding force behind the Bicentennial Commission was 2nd district councilman Bob Caesar.

The commission itself was chartered to exist, then to dissolve once the party was over. Here’s the ordinance.

It somehow was determined to publish a book, as eventually to be written by a Tennessee-based freelancer when of course local writers might have been chosen to inject genuine feeling into the project, but then again the Bicentennial itself sank beneath the weight of same-old-generic-planning.

On November 16, 2011 the newspaper laid out the parameters of the tome to come.

In related news, Caesar updated the redevelopment commission on the status of a bicentennial book being prepared for release next year.

“I know that’s a lot of money, but there’s a lot of work that goes into these,” he said.

Redevelopment funds were used as a loan to the bicentennial commission to get the book started, and Caesar said the advance will be paid back after sales start accumulating.

As Caesar said the $144,000 will be derived from donations to the cause, proceeds from the book sales will go straight to funding bicentennial activities.

About $107,000 of the production total has already been raised, Caesar said.

He added the book will be extremely detailed and an appropriate representation of New Albany’s history.

“We feel there won’t be any problem selling it,” Caesar said. “These stories will have flavor to them.”

With the preceding as background, and not forgetting that others intimately involved with the workings of the Bicentennial Commission subsequently raised public questions about the group’s financial operations (see here and here), allow me to review the chronology detailing the city’s refusal almost six years later to release the commission’s financial records.

And if the city actually does not possess financial records from an entity chartered by ordinance and subject to the same rules and regulations as any other, exactly what does this say about the city’s commitment to any rules or regulations?

New Albany 2nd district city councilman Bob Caesar became chairman of New Albany’s Bicentennial Commission at its inception in 2011. In June 2013 former Bicentennial Commission treasurer Vic Megenity asked City Council for an audit of the commission (links above), citing concerns over expenditures which he alleged had not been addressed either by the commission or Mayor Jeff Gahan. Council voted against the audit.

In January 2014 at a city council meeting I asked Caesar about the status of the special Bicentennial book, Historic NEW ALBANY Indiana: By the River’s Edge, which was published thanks to a “loan” of indeterminate amount in 2011 from the Redevelopment Commission to the Bicentennial Commission; the book’s cost supposedly was $140,000, or $28 per book for 5,000 books).

There was no reply.

A year later, in April of 2015 at another city council meeting, I again asked Caesar for financial records detailing the committee’s activities. Specifically I sought details about the book: How was it contracted, published and sold? What was the status of the Redevelopment Commission’s loan, without which the book wouldn’t have been published at all? Had it been repaid?

At the time, and up to the present day, these books were being routinely gifted by Mayor Jeff Gahan at ribbon cuttings and public ceremonies. If the original press run hadn’t been sold, how many books remained? Where were they being stored? Who paid for them? Was it wholesale or retail?

Publicly in front of his council colleagues at this 2015 meeting, Caesar said he would get the information for me. By early June, I’d heard nothing, so I e-mailed him.

Monday, June 08, 2015:
“Do you recall a few weeks back, when I spoke a city council and expressed interest in learning about the state of the Bicentennial finances? Consider this my follow-up.”

Tuesday, June 09, 2015:
“None of the financials are on line. They are upstairs under a lot of stuff. I can tell you all bills are paid, and paid on time. All reporting to the state is done. And we did not use all of the city money. There was about 5 to 10K that stayed in the city funds … Give me a little time and I’ll get them.”

Caesar did not respond to the e-mail, but I saw him at Harvest Homecoming just a few days later and asked whether he received the e-mail. He nodded assent. I told him there was no particular hurry, but I’d love to see the figures. He said okay.

I did not hear from him after that. Ever.

On June 6, 2016 at yet another city council meeting, I used my public speaking time to ask Caesar about my information request.

Now, more than a year later, his memory apparently failed him. He couldn’t recall our previous public chats in the council chamber, or our e-mails correspondence — and he’d turned petulant.

I reminded him that 418 days was a long time to wait for public records, and he replied, “You know, I think they’re on-line now.”

I asked him if there was a URL.

(The next day I searched, and the records weren’t on line.) 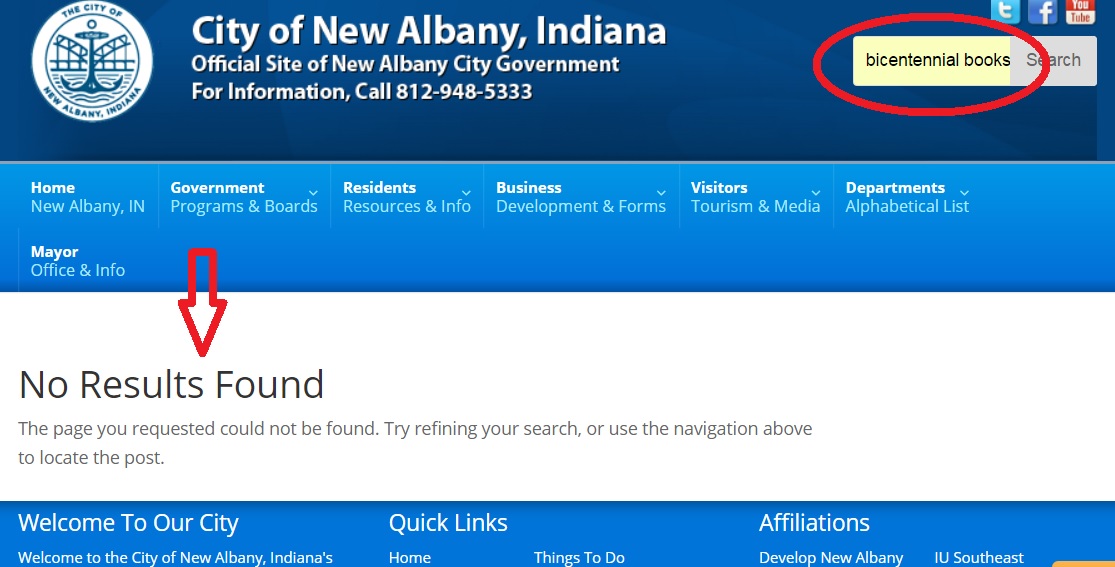 Baylor: “If you’re not going to get me these numbers, I can file a FOIA request.”

Consequently I submitted this request to corporate attorney Shane Gibson.

Under the Indiana Access to Public Records Act § 5-14-3-1 et seq., I am requesting an opportunity to obtain copies of public records that pertain to the financial dealings of the Bicentennial Commission, the creation and operation of which is detailed in New Albany’s code of ordinances (33.165; attached).

The period being requested encompasses the Bicentennial Commission’s inception through the present time.

Details should include all bids, contracts and expenditures for Bicentennial Commission activities, prime among them the process through with the Bicentennial book (“Historic New Albany, Indiana: By the River’s Edge,” by James Crutchfield) was contracted, published and sold, and the status of the Redevelopment Commission’s loan to make publication of this volume possible.

As part of this request, I am requesting to know the current status of inventory with regard to these books. If books remain unsold, how many remain, and where are they stored? Also, when a Bicentennial book is given away at a public ceremony, who paid for it? These invoices are to be considered part of this request.

As part of this request, I am further requesting copies of the official e-mail correspondence between Robert Caesar and other members of the Bicentennial Commission pertaining to these plans and transactions.

I would also like to request a waiver of all fees in that the disclosure of the requested information is in the public interest and will contribute significantly to the public’s understanding of what it cost to honor the city’s Bicentennial, and how these decisions were made, under the aegis of a free press (NA Confidential blog). My request is strictly for news gathering purposes and is not being sought for commercial purposes.

The Indiana Access to Public Records Act requires a response time within seven business days. If access to the records I am requesting will take longer than seven days, please contact me with information about when I might expect copies of the requested records.

If you deny any or all of this request, please cite each specific exemption you feel justifies the refusal to release the information and notify me of the appeal procedures available to me under the law.

Thank you for considering my request.

On June 16, 2016 Gibson acknowledged my information request and stated that there would be a response by July 8, 2016. 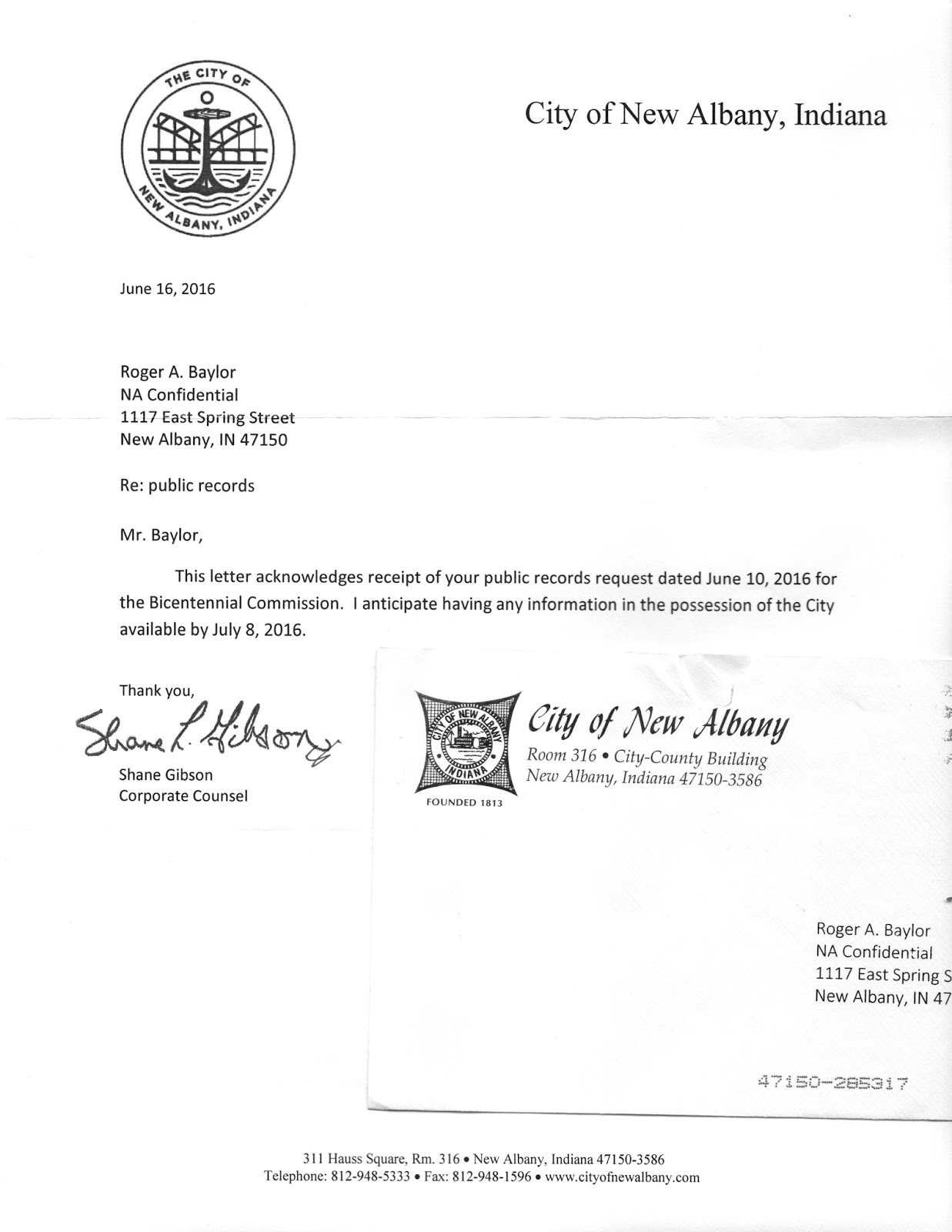 July 8 came and went. Approximately three months later, having received no communication of any sort from Gibson, I sought the opinion of the Indiana Public Access Counselor, who accepted my complaint, informed Gibson about it, and set a date of December 5, 2016 for the counselor to hand down a decision.

Then on November 30, with the access counselor’s ruling imminent (both Gibson and I received an e-mail to this effect), Gibson finally replied.

In essence, he said I could have only what I didn’t ask for, and as for the rest of the financial records of the Bicentennial Commission, these were unavailable: “The city does not possess the above referenced items.” 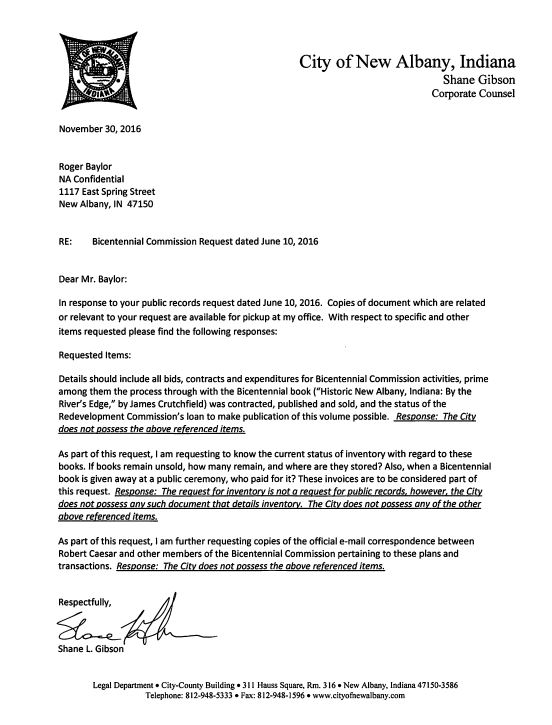 To summarize, the city had formed a commission to spend several hundred thousand dollars. Caesar conceded they were in his possession. He would not produce them, and presumably because a councilman was keeping public records in his garage, attic or at the landfill, the city could not produce them either.

To reiterate: Given the intent of Indiana’s public access laws and the obligation of city officials to produce information when requested, Caesar’s and Gibson’s tandem obfuscation constituted a thumbing of noses at the law. In 2016 I chose not to pursue the issue any further; I had a life to live and things to do, and 600 days is a long time to wait for what should have taken a person with a conscience roughly ten minutes to produce.

Thus I conclude with the same question I’ve been asking all these years: If Gibson, Caesar, Gahan and whomever else participated in the wretched shamefulness worked this hard to avoid providing information about a “mere” three hundred thousand dollars, to what lengths will they go to duck and over when the sums get real?

You can do as you please, but I won’t vote for people who can’t be trusted.