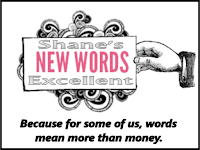 This morning a friend expressed annoyance at being compelled to go to work, not just today, but in general.

To which I exclaimed, “right on, sister.”

Immediately this exchange brought to mind the words of Oscar Wilde: “Work is the curse of the drinking class.”

For those unaware of 19th-century socialist (and concurrently, temperance) history, the original phrase was “drink is the curse of the working class.” Wilde’s cleverness has a term.

Welcome to the symmetrical world of chiasmus. Chiasmus is defined by The Concise Oxford Dictionary of Literary Terms as “a figure of speech by which the order of the terms in the first of two parallel clauses is reversed in the second. This may involve a repetition of the same words (“Pleasure’s a sin, and sometimes sin’s a pleasure”– Byron) or just a reversed parallel between two corresponding pairs of ideas.”

Chiasmus (pronounced kye-AZ-muss) is named after the Greek letter chi (x), indicating a “crisscross” arrangement of terms. One can literally mark many chiastic expressions with an X. Take Mae West’s contribution to this genre:

Certain chiastic statements such as “all for one and one for all,” and the shortened Cicero quote “eat to live, not live to eat” are word palindromes. The rhetorical elements of chiasmus are always rendered in palindromic order, seen in the above Mae West quote. In Genesis 9:6, we have a longer structure: “whoever sheds the blood of man by man shall his blood be shed.”

Chiastic statements appear to reveal hidden truths and are thus popular in Biblical writing: Aside from the Genesis 9:6 quote, other examples include “there is no fear in love; but perfect love casteth out fear” (1 John 4:18) and “many that are first shall be last; and the last shall be first” (Matthew 19:30). According to The Literary Guide to the Bible edited by Robert Alter and Frank Kermode, chiastic structure is built into Biblical Hebrew.

Physicist Nils Bohr said: “There are trivial truths and great truths. The opposite of a trivial truth is plainly false. The opposite of a great truth is also true.” Rhetorical devices are useful in exhibiting Bohr’s point. Oxymoron is sometimes erroneously defined as a contradictory expression. A true oxymoron, such as Shakespeare’s “sweet sorrow,” or Milton’s “darkness visible” is a rhetorical device, where the seeming contradiction involves a point.

Chiastic transpositions can be similarly employed. Take the French proverb “love makes time pass, time makes love pass,” or Ernest Hemingway’s fondness for asking people which of these two statements they preferred: “Man can be destroyed but not defeated,” or “Man can be defeated but not destroyed.”

Chiasmus can also be employed as a form of wit. Humour that uses incongruity often uses chiasmus, especially with implied statements. Oscar Wilde was a master at this type of transposition. Some of his classics are: “work is the curse of the drinking class” (parodying “drink is the curse of the working class”) and “life imitates art far more than art imitates life,” and “the English have a miraculous power of turning wine into water.”

Other implied chiastic quips include Mae West’s “a hard man is good to find” and “a waist is a terrible thing to mind,” Groucho Marx’s “time wounds all heels,” and the amphibian philosopher Kermit the Frog’s observation that “time’s fun when you’re having flies.”

This type of transpositional humour can also be used in defining matters. A hangover has been described as “the wrath of grapes” and a critic who provides a harsh opening night review is said to have “stoned the first cast.”

But did Wilde coin the work/drink chiasmus? The evidence suggests he probably did, and there’s a story. As for me, I took a shortcut and made drinking and work synonymous.


Work is the Curse of the Drinking Classes (Quote Investigator)

Work is the curse of the drinking classes.

Oddly, I have not found a citation for this statement dated before the death of Wilde. Would you please examine the provenance of this saying?

Quote Investigator: Oscar Wilde died in November 1900. The earliest published instance of this quip located by QI occurred in the caption of a newspaper cartoon in 1902. The details are given further below.

Yet there is good evidence that Oscar Wilde did craft this statement. In 1916 the writer and outsized personality Frank Harris who was a friend of Wilde’s published a biography titled “Oscar Wilde: His Life and Confessions”. Harris described a party he threw during which Wilde delivered the remark.

A little later I gave a dinner at the Savoy and asked him to come. He was delightful, his vivacious gaiety as exhilarating as wine. But he was more like a Roman Emperor than ever: he had grown fat: he ate and drank too much; not that he was intoxicated, but he became flushed, and in spite of his gay and genial talk he affected me a little unpleasantly; he was gross and puffed up. But he gave one or two splendid snapshots of actors and their egregious vanity. It seemed to him a great pity that actors should be taught to read and write: they should learn their pieces from the lips of the poet.

Yet even when making fun of the mummers there was a new tone in him of arrogance and disdain. He used always to be genial and kindly even to those he laughed at; now he was openly contemptuous.