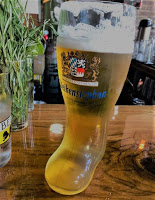 I can’t bring myself to post an image of a “hard seltzer,” and so here’s a delicious boot of  Weihenstephaner Festbier.

One important thing to remember when pondering hundreds of types of jacked-up liquids designed primarily to mask the flavor of the alcohol is the source of the alcohol itself.

The use of liquor and/or wine would come at a higher rate of taxation; however, ferment some cane sugar and the finished ingredient is taxed like beer, at a lower rate. This matters a lot to a bazillion-dollar market.

Meanwhile the first known use of “alcopop” came in 1996.

The case against hard seltzer, by Bo Franklin (1843 Magazine)

Alcopops of old were brash, offering puckering sweetness and vibrant hues that made them a clear indulgence. This unabashed sense of fun was their downfall: they enticed young people and were very obviously not good for them. Hard seltzer, by contrast, is an apology of a drink. By essentially spiking La Croix, the upmarket sparkling water that aspirational twenty-somethings obsess over, the makers of hard seltzer have cynically exploited the “wellness” trend, positioning their drinks as a salubrious way to get steaming drunk on a sunny afternoon. The result? Every insipid swig reminds you of its apparent worthiness; it’s a fairly efficient way to get drunk but offers little pleasure. Hard seltzer is booze masquerading as something far more dull: water.

But maybe The Economist’s writer is missing something. A few weeks back at Pints&union we started stocking the two top-selling White Claw flavors, mango and black cherry. Afterward my attention was drawn to this informative angle.

… White Claw’s ads and social media posts feature the canned product — slimmer and taller than a traditional beer can — front and center, with men and women firmly in the backdrop. And when they do appear, they’re on equal footing.

There’s football — not on a bar TV but rather a co-ed game being played outdoors. Women might be shown in tightfitting clothes, but it’s athletic gear or just regular beachwear, and the models look strong and fit instead of seductive.

That’s entirely intentional, says Sanjiv Gajiwala, vice president of marketing for White Claw. When the brand launched in 2016, the idea behind it was that the traditional worlds depicted in beverage marketing had pretty much gone extinct. White Claw would be the drink of the new gender norms, of the kinds of “group hangs” that define young people’s social lives. “It wasn’t a world where guys got together in a basement and drank beer and women were off doing something else, drinking with their girlfriends,” Gajiwala said. “Whatever we put out creatively and how we positioned the brand really reflects that everyone hangs out together all the time.”

We were advised by the wholesaler from the outset that obtaining reliable stocks of these flavors in the signature “slimmer and taller than a traditional beer can” White Claw unit might be impossible given an ongoing shortage of these cans, or aluminum tariffs, or maybe both.

Now, my being the sort who cares about the actual flavor of the beverage alcohol variant I’m choosing to swallow, the shape of the package would seem to be of little consequence, but perhaps the relative slowness of White Claw’s sales pace at the pub thus far has to do with the comparatively less popular shape of the can.

I can’t help thinking back to previous alcoholic beverage “innovations,” from wine coolers to Zima.

Will “hard seltzer” have the sort of legs they didn’t? Analysts seem to think so. As for me, I must echo the words of the immortal Pal Paulsen and concede that our little chat about hard seltzer moves me — straight to the fridge for another Sierra Nevada Pale Ale.