Over the weekend something unusual happened. After what seems like decades of non-engagement, suddenly a handful of Tricky Dickey’s robotically programmed Democratic Party candidates veered from their scripts and began improvising on the digital hustings.

The ensuing scene wasn’t pretty, although it was highly instructive.

Surely Squire Adam worried that one of them might actually slip up and be truthful, and sure enough a fair measure of testy bile oozed through the cordon. It appears the Democrats genuinely do picture themselves besieged in the sacred Alamo, with barbarian enemies steadily closing in, endangering Jeff Gahan’s only true masterpiece during a career of consummate time-serving mediocrity: Slick Jeffie’s Astroglide-Driven Pay-to-Play Political Patronage Viagra Superstore.

Hence the following exchange at The Book. 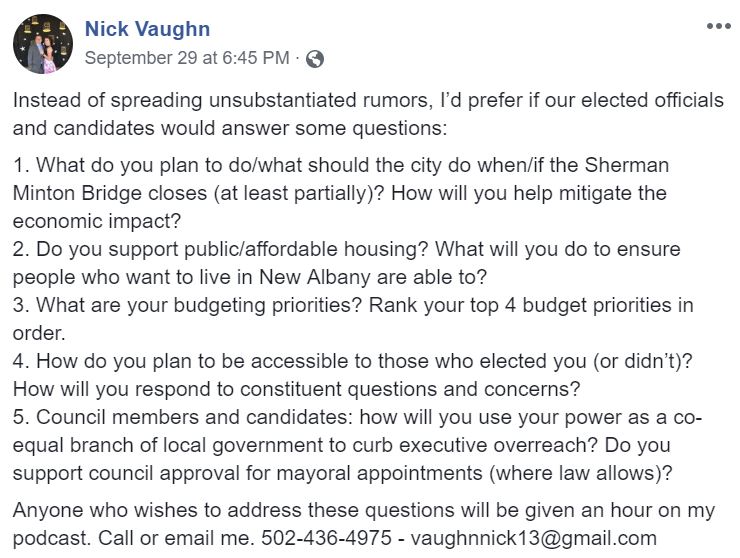 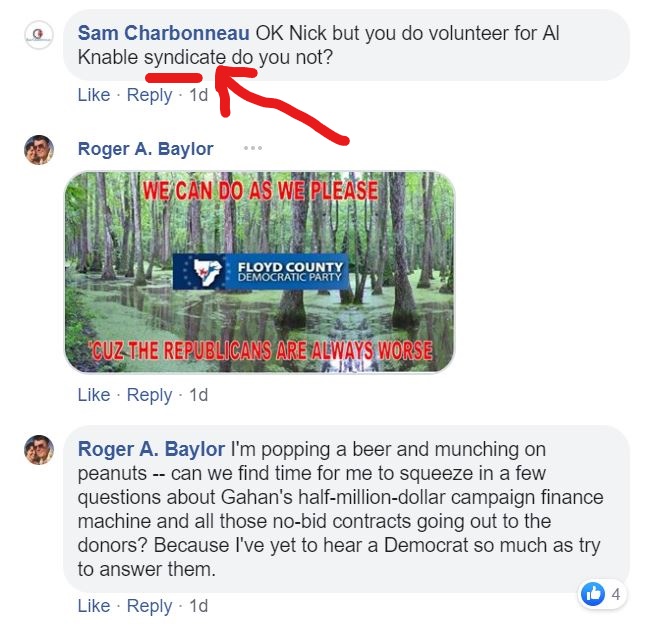 Let’s get down to words. We see that at-large city council candidate Sam Charbonneau is using the world “syndicate” as a noun.

1. A group of individuals or organizations combined or making a joint effort to undertake some specific duty or carry out specific transactions or negotiations:

The local furniture store is individually owned, but is part of a buying syndicate.

2. A combination of bankers or capitalists formed for the purpose of carrying out some project requiring large resources of capital, as the underwriting of an issue of stock or bonds.

3. Journalism. An agency that buys articles, stories, columns, photographs, comic strips, or other features and distributes them for simultaneous publication in a number of newspapers or periodicals in different localities.

As an amalgam of the first two definitions, it isn’t a stretch to suggest that any organized political party* functions as a syndicate of sorts.

After all, they’re engaged in specific undertakings toward a desired end, and as we know all too well, large resources of capital are necessary to achieve their goals. To belong to one of these political party entities is to accept, whether implicitly or explicitly, a syndicate-like state of engagement.

Consequently, if incumbent councilman Al Knable is involved with a syndicate, so is Charbonneau. Taking it a step further, in purely municipal terms, Charbonneau’s political party syndicate holds almost every lever of power in the city; if not through diminishing electoral performance, then through appointed board fiefdoms like the board of works, redevelopment, the sewer board, and so on.

Gahan has nurtured a highly effective syndicate, hasn’t he?

Charbonneau seeks to become a cog in Gahan’s syndicate, doesn’t he?

Perhaps “syndicate” is a poor choice of words, after all, but it’s fascinating to watch as Gahan’s and Dickey’s cash-infused machine is unfurled at high snark for all the world to see. It’s an instance of rising pique as so many of us strive to #FlushTheGahanClique.

* “I’m not a member of any organized political party … I’m a Democrat.”
— Will Rogers