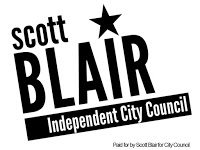 Call it an endorsement if you will, or think of it as my personal support, backing, seal of approval, recommendation or advocacy.

Being an independent in a situation of prevailing two-party primacy probably is a great deal harder than it appears.

Scott Blair has been elected to council twice as an “I,” and he should know. I think Scott was not always as diligent as he should have been during the first few years of his council tenure as it pertains to the inherent and fatuous chicanery of Gahanism (generic mediocrity + pay-to-play monetization = Gahanism), but to his credit he did his homework and has improved with the passage of time.

Scott is accessible, and he’ll return calls. His stance during the Reisz Mahal vote was especially appreciated in these circles.

I’m not seeing much from Lisa Chandler, the Democratic Party candidate, although the recent trend in District 6 has been for the Democratic candidate to be irrelevant. Is there even a Facebook page?

It’s almost as if voters in the 6th feel compelled to atone for two pre-mayoral Gahan city council terms (2004-2011) by punishing the Democrats. Chandler might have great things to say; so far, I’m unaware of them.

Lest there be any misunderstanding, Scott Evans appears to be a solid contender on the Republican side. He’s been hoofing it. I’ve heard lots of good comments.

As I explained previously, it’s just that I don’t like the idea of police officers in elected positions like council. It’s my own conscience and entirely personal, and it’s not about being anti-police. Rather, it has to do with worrisome accumulations of power. I believe being a cop and a councilman simultaneously is a concentration of too much power in one individual.

You’re free to disagree, and my ears are open to your arguments against my position. I’d love to find a loophole in my conscience to embrace otherwise fine candidates like Evans, but so far it has been elusive.

However, given the rules as they’re written, if I lived in the 6th district I’d vote for Scott Blair, and I would feel good about it.