The notion to repeat these thoughts from the Pre-Trump Pleistocene (okay, 2016) came when yet another News and Tribune staffer recently departed for greener fields at Louisville Business First, the latter having become an admitted source of information for me during the course of writing web site posts for Food & Dining Magazine.

Let’s turn back the clock.

June 23, 2016: ON THE AVENUES: There’s no business like no business, and it’s none of your business.

I’ll return to politics in a moment, because naturally business must come first. Note that my contempt for the breathless contents of business-oriented publications is boundless. It is eternal. It is the stuff of inebriated, chortling legend.

Talk numbers to me, baby.

However, every now and then a stray provocation slips through my cordon sanitaire, as here:

How to survive political hostility when trying to run a business, by Terry Brock, Contributing Writer, Louisville Business First

Whoa! Have you sensed the level of political rivalry in this year’s election?

Yes, the American political scene has been known to be particularly venomous throughout history …

… Yet, this election seems even more vicious, at least by 20th and 21st century standards. I’m wondering how it affects relationship marketing for small businesses and entrepreneurs like you and me.

Here are some ideas …

Venomous and vicious – which is to say, potentially important. This election may influence everyday business reality for generations to come. It may engender revolution, ignite reaction, or reinforce an uneasy status quo.

In short, the 2016 election truly matters for small business persons and entrepreneurs, and consequently, the consultant Brock’s bullet points counsel complete and utter detachment from the election (for their maddening details, kindly fluff Louisville Business First by visiting its web site).

And who’s this guy again?

Not that 1Si’s self-interested cadres care one jot, but my practical advice differs markedly. I generally advise small business persons and entrepreneurs to make an earnest effort to understand politics and elections, particularly at the local level, where it impacts them the most, and to actively participate in these exercises.

Concurrently, is there any valid excuse for squandering potentially productive work time by reading business-oriented publications?

Business writing should not ever be mixed with actual business. Don’t these business people have more important things to do than read — you know, like focusing on their businesses?

In mid-rant, I was reminded of a passage in Dylon Jones’ remarkable profile of “The Independent” (that’s me) in the June, 2016 edition of Louisville Magazine. 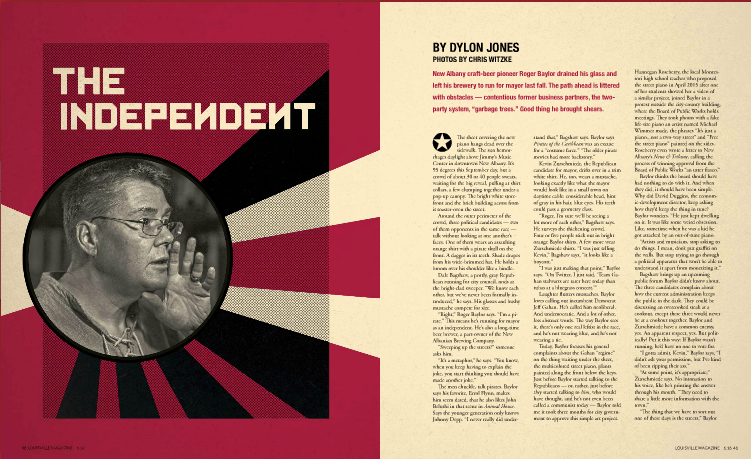 The profile  — as of 2019 it isn’t accessible on-line, but Dylon told me he’ll fix that — is required reading for the likes of Terry Brock, Wendy Dant Chesser and Adam Dickey – but I digress all too readily.

I have a conversation with someone at the (Bank Street Brewhouse) who threatens to hunt me down if I identify them. I could, but won’t. I don’t believe in “off the record,” especially not retroactively. But I do believe in letting certain wounds – whatever they may be – heal beyond public gaze.

“Did you get the part about how Roger destroyed his business?” they said. “No one from city hall comes here.”

“Well, who could I talk to about that?” I asked.

“Anyone on the street,” they said.

As Elton John once observed, it’s a sad, sad situation – and it’s getting more and more absurd. After all, if it’s true that “city hall” stopped coming to Bank Street Brewhouse, then I managed to achieve a cherished goal of Americans from coast to coast, for it means I personally saw to it that GOVERNMENT GOT OUT OF OUR LIVES.

You’d think I’d be paid handsomely for this, not basely insulted. If only I could bottle this government-free formula, and hastily sell it to AB-InBev; that’d get my face on the cover of a business publication, for sure.

It’s an unspeakably dreary landscape. There’s the professional business consulting class, recommending that entrepreneurs accustomed to taking fabulous risks – who’d never have gone into small business in the first place without standing tall for something – adopt generic, beige Pablum as a staple of their professional diets.

Then there’s the shrill claim that political extremism destroyed my own business, and that’s odd, because when I behaved exactly the same way for more than 15 years while standing atop a soap box situated behind the bar at Rich O’s, my behavior was edifying, entertaining and educational; probably an alcoholic Commie, though few seemed to mind.

Brock would be so proud of me: I helped generate revenue and increased productivity. We have medals for that, right?

However, there is a difference in scope between eras, and it is genuinely instructive. During the period of my nightly barside preaching at the Public House, subject matter typically pertained to national and international affairs.

There were opinions aplenty, but they were safe, in the sense that it’s a breeze to pontificate when lubricated, and there is no way to directly influence the outcome.

Because denouncing the Iranians from a barstool is easy. Repeating these words on a downtown Tehran street corner to their faces – well, that’s hard. Distance and liquidity enhance vehemence and courage.

Local political power structures play a huge role in determining business conditions and influencing business decisions, every day, throughout the year – don’t they?

And these local political power brokers live right here among us, right?

Theoretically, their proximity is as sweaty and direct as democracy gets. The grassroots can be no closer to you than the councilman residing two doors down. If a two-way street would lift your business, and yet it still runs in only one direction, then political power is being arrayed against you.

How does one hope to rectify the imbalance and fix the street without becoming part of the solution?

But no one from city hall comes here …

Perhaps their absence is a reflection on the prejudices of city hall, not the business or the proprietor, and their negligence is an abuse of political power, not its proper exercise.

Perhaps my political involvement has been grassroots-up, in reply to their top-down, because contrary to American default assumptions, self-defense still can exist apart from firearms.

Perhaps we can cure the mother of all illnesses right here at home, where it’s as close as it will ever be, but administering the needed medicine requires involvement and engagement, not cowering from a distance, head stuck in a business publication, pants around ankles.

1Si espouses unity on behalf of The Man, but I prefer unity in defiance of the Man. As citizen Franklin said, “We must, indeed, all hang together, or most assuredly we shall all hang separately.”

He was a good businessman, that Benny.

The preceding prompted a follow-up the very next day.

June 24, 2016: Business publications, and why I should know better than to tangle with an Over 50 Marketing Thought Leader.

Yesterday my weekly column made reference to an Insider Louisville piece by Terry Brock, hastily assuming he was a local writer, but this is mistaken. He actually lives in Florida, and appears to be quite renowned.

I appreciate that Brock took the time to post a comment about my column, and of course I’d love to have a beer with him if he comes through town while on tour.

ON THE AVENUES: There’s no business like no business, and it’s none of your business.

Brilliant piece, Roger! I love every word of it. Yes, I believe we need a separation of business and politics and businesses should focus on their business.

You raise some excellent points about local issues. That is important. For many of us, “local” is Planet Earth. We focus on issues that affect many and are tied together based more on values and aspirations than a defined piece of dirt where we happen to live currently.

Hey, I would *LOVE* to talk with you more about this. Sounds like these types of discussions would be best over some of that good craft beer you have up there in New Albany! For doing such an outstanding job on this piece, I owe you a nice beer, or other beverage of your choice!

Thanx for writing this. Simply brilliant, Roger! Keep up the good work!

Here’s my most renowned contribution to business marketing. It’s rather politicized, though only because I fully intended it to be that way. 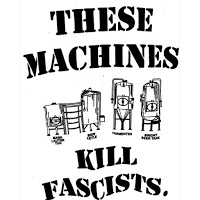 Terry Brock and I never got together, unfortunately. My former business finally disgorged me in February of 2018, and City Hall currently is engaged in a great struggle to renew its pay and privileges for another four years. When Dylon posts the profile text, I’ll link readers to it.

Now if you’ll excuse me, I have several “business publications” to ignore … and adult beverages to consume.

September 5: ON THE AVENUES: Welcome to traditional Danish lunch in Copenhagen, September 1989.

August 22: ON THE AVENUES: The 32 most influential books in my life.

August 15: ON THE AVENUES: Breakfast is better with those gorgeous little herrings.