The shenanigans and ass-hattery of Deaf Gahan’s last-minute Main and Bank stop light project have commenced, and once again merchants at and near Underground Station are in for a hell of a ride.

But first, let’s have a look at the Pledge of Allegiance to the flag of Gahan’s political patronage, as performed by our Bored of Works on September 3. Note again that “over time” as cited here by city engineer Larry Summers must be translated for ordinary citizens to understand:

“We didn’t bother with this intersection for years on end until just recently, when instead of posting a pre-schooler to stand there, watch, and view the idiocy, we awarded an $80,000 contract for research to one of the mayor’s donors.” 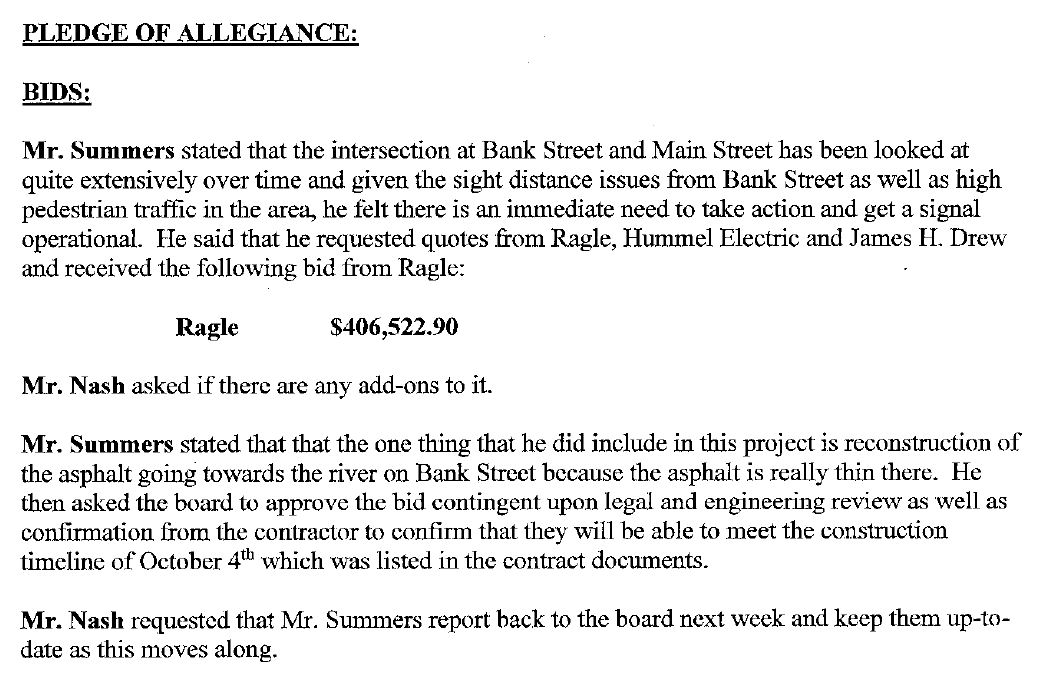 Now, having waited years on end to do what was obvious all along, Gahan is showing his horses the whip.

I was walking down Main Street yesterday between 5th Street and Bank, when a semi-trailer as big as Gahan’s ego flew past me on Main doing about 45 mph, reminding us that when the mayor threw all that money at the tall native weed medians where the rich folks live, there wasn’t any money left to actually take a stab at slowing traffic elsewhere.

There was a commotion. Cones started going down on Bank Street, and then surveyors, Duke Energy people, Larry Summers and Mickey Thompson from the Street Department gathered.

A very harried looking man arrived and introduced himself as the foreman on the project and proceeded to outline what was about to happen to merchants in Underground Station and facing Main.

Starting Monday the 16th, Bank Street on the south side of Main will be shut down and dug down to the depth of two feet. The entire intersection of Main and Bank will be milled as all the new light and anchor-festooned crosswalk infrastructure goes in.

The foreman seemed to be in a blind panic. He said the Bank/Main project had been labeled “emergency” election year status and therefore would be fast tracked, adding that the amount of work they have to get done would typically require three months — ah, but Deaf Gahan has demanded that work be completed in 27 days.

I offered him a loaded Rice Krispies Treat and some Kool-Aid, and this seemed to calm him. Subsequently it transpired that yet again, the city hadn’t bothered dispensing information to stakeholders, perhaps because of the election-year emergency.

For instance Dr. Gradel at StoneWater Acupuncture & Chiropractic, whose office already is barely accessible due to the Reisz Mahal nonsense, had not been informed of what was going to happen. I watched as she chased down Thompson to ask for temporary loading zone signage in the hopes that her clients, who are coming to her for medical care, MIGHT be able to actually get to her office.

One of the merchants texted their landlord to ask if anyone from the city had contacted him, but he hadn’t heard anything from them and only just saw the newspaper article.

The Underground Station courtyard will be restricted in terms of accessibility, and customers will have to park in the back and then hoof it around to Pearl Street and up to get to any of the Main Street businesses.


Is Gahan ever going to allow New Albany merchants to transact business in peace? It just goes to show that people who’ve never run a business themselves have no idea what it’s really like.

Slick Jeffie’s wasteful masterpiece: $85,000 + $406,522 = the price for traffic lights at a downtown intersection where a four-way stop would work just fine.