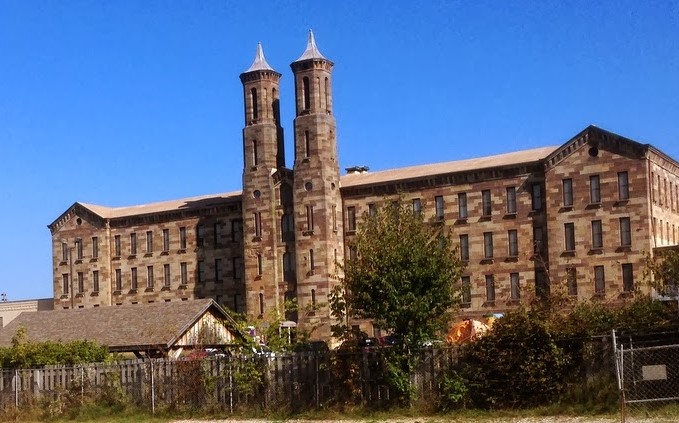 This musing is prompted by an Indiana Landmarks mailing about two projects in Cannelton, Indiana. These will be the subject of the second part.

Some readers with long memories will recall NABC’s appearances dispensing beer at the Cannelton Heritage Festival. It can’t possibly have been seven years since the first of three appearances (2012 – 2014).

One lovely Saturday in Cannelton, Indiana.

NABC at the Cannelton Heritage Festival on Saturday, October 12.

I wrote a longer essay in October, 2012 as a recap to our first visit. It was published at the long defunct Louisville Beer Dot Com, and has not appeared in its entirety at NA Confidential.

Earlier this year, I was contacted by a civic-minded resident of Cannelton, Indiana, which is situated amid verdant hills on the Ohio River, a few big navigational loops downstream from Louisville. If you’re not traveling by boat, Cannelton is about an hour and a half away.

My contact, Rob, wanted to know if NABC would pour craft beers at an important annual municipal function in October: Cannelton’s Heritage Festival, which in 2012 was slated for double duty as the city’s 175th birthday celebration.

Perhaps the most striking aspect of the preceding paragraph isn’t that someone in Cannelton would conceive of the idea of bringing better beer to the party. It’s that Cannelton actually is a city, as legally constituted, and not a town as many of us would perceive it. The population is only 1,200, making it one of the smallest city in Indiana.

Conversely, I grew up in Georgetown, Indiana, where 2,800 people live; rest assured, Georgetown never has been a city in most accepted urban senses of the word.

But whatever its organizational nomenclature, Cannelton has a long, rollicking and fiercely independent history. The city was founded 175 years ago by a group of regional investors, some from Louisville, with the objective of creating a riverside, coal-fired textile manufacturing center (“cannel” is a type of coal), and while this dream never came to fruition, Cannelton prospered – for a while.

The most prominent remaining symbol of Cannelton’s bygone industrial past is a huge sandstone cotton mill building by the river. When constructed around 1850, it was the largest such structure west of the Alleghenies. Recently refashioned into 70 low-income apartments, the hulking structure stands only blocks away from Cannelton’s public high school, the second smallest in Indiana.

Perry County is hilly, forested and sparsely populated, and in a statewide Hoosier context, its two population centers (Cannelton and the nearby county seat of Tell City) are quite isolated from commercial mainstreams. As one might expect, Cannelton hardly enjoys immunity from the litany of societal ills afflicting rural areas throughout the United States. As Rob freely divulged when I drove down for a look-see in August, “Our biggest problem is poverty.”

But there seems to be a spirited group of people working hard to perpetuate Cannelton’s sense of community, and now I know that at least some of them might like to drink a craft beer every now and then.

In approximate terms, this is how NABC came to be enjoying a brilliant autumn afternoon in Cannelton on Saturday, October 13, setting up shop at the Heritage Festival at 9:30 a.m., central time, and pouring until dusk, when attendees gravitated a couple blocks away for an all-classes school reunion and evening finale at the mass-market beer garden.

The usual NABC festival rig had been packed: Four-product cold plate, pop-up tent, cups, tools, change bag, banners, propaganda, and of course, kegs of beer. In addition to our own Gold, Community Dark and Hoosier Daddy, we hauled Upland Wheat and represented for our friends in Bloomington.

The serving area was in a small pocket park off Washington Street, near tables and tents where a quartet of Hoosier vintners was pouring samples and selling bottles of wine. Our catering permit allowed samples and full pours of draft beer. If we could have sold growlers, there’d have been more than a few takers.

The street was blocked off for the festival, and there were booths lining the sidewalks, staffed by artisans, craftsmen, church congregations and civic organizations. Not unexpectedly, the scale was far intimate than New Albany’s Harvest Homecoming, where the sheer immensity of the temporary festival typically obscures and overwhelms the physical setting downtown. In Cannelton, the festival blends more harmoniously with the streetscape.

It would be possible to imagine the historic old commercial buildings, many in obvious disrepair, brooding with ghostly intent behind the booths. However, to me there were strange inanimate grins emanating from the architectural embellishments, as though there was delight in the appearance of life in the streets.

To be sure, the daytime festival crowd in Cannelton wasn’t so much a drinking crowd, whatever the adult beverage, although the ones who ventured into our licensed enclosure were curious and open to trying something new. This suited me just fine, as I find it increasingly refreshing to talk beer with people who are relatively new to the craft beer world.

While it’s true they often harbor pre-conceived notions (for instance, the darker the beer, the stronger it must be), they also are blessedly absent the type of overbearing and often misplaced concerns, which can be both boorish and irrelevant when it comes to garnering craft beer’s next five percentile.

Explaining why a Belgian-style Wit tastes the way it does, and being compelled neither to trace the specific agricultural lineage of the organic coriander used within, nor recall the late Pierre Celis’s shoe size, is liberating for me. Better yet, it’s plenty enough for the folks standing metaphorically just outside our collective craft beer tent, waiting patiently for the motivation to enter … in layman’s terms.

They’re interested, and they’re looking for beers and breweries to believe in, and to be loyal to. They may come to the geeky complexities later, or not at all. I say to them: Pull up a pew and have a few. After all, there’s no sense letting anyone languish in the corporate mockrobrew section of the aisle if a solid, locally-brewed alternative lies nearby.

Education always has been the key, and I believe this pendulum is swinging back with a vengeance. Events like Cannelton’s strengthen my resolve to do promote exactly that, and to spend more time teaching. This year, a keg in daylight; next year, maybe two at night.