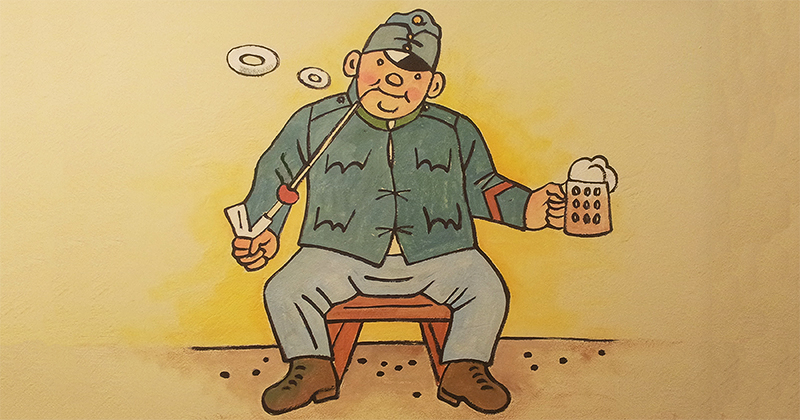 Ignore the essay’s title and forget progressive or regressive shadings, because this isn’t about modern political definitions. Švejk is universal, because idiocy is everywhere — on all sides, in each nook and every cranny.

I, too, have been fixated on Švejk for a very long time. Way back in the beginning of Rich O’s Public House I borrowed Švejk’s face from an illustration in one of Michael “Beer hunter” Jackson’s books and used it to adorn the beer list. Švejk was never far from my own thoughts during those sessions in traditional Prague pubs during my communist-era travels.

That’s why I say Švejk Day surely is a promotion Pints&union should consider staging annually. The Pilsner Urquell awaits, and Chef Dalton can conjure the pork.

This needs to happen. In the interim, this is a classic essay about an equally timeless fictional creation. I can’t hope to summarize it, so I’ll merely show you the way.

Why Every Progressive Should Read The Good Soldier Švejk (Literary Hub)

A copy of The Good Soldier Švejk and His Fortunes in the World War—a classic comedy by Jaroslav Hašek, a countryman, contemporary and peer of Franz Kafka—is never far from my desk.

I leaf through it, check out the ditties, drink in the cartoony illustrations, get a bolus of inspiration from a page or two.

Huck Finn defines America. Eugene Onegin defines Russia. Josef Švejk, a professional dog thief and, literally, a certified dimwit who stumbles through World War I, is the quintessential Czech. As it serves up bawdy tales and run-on non-sequiturs, this novel accomplishes much more than to define a nation.