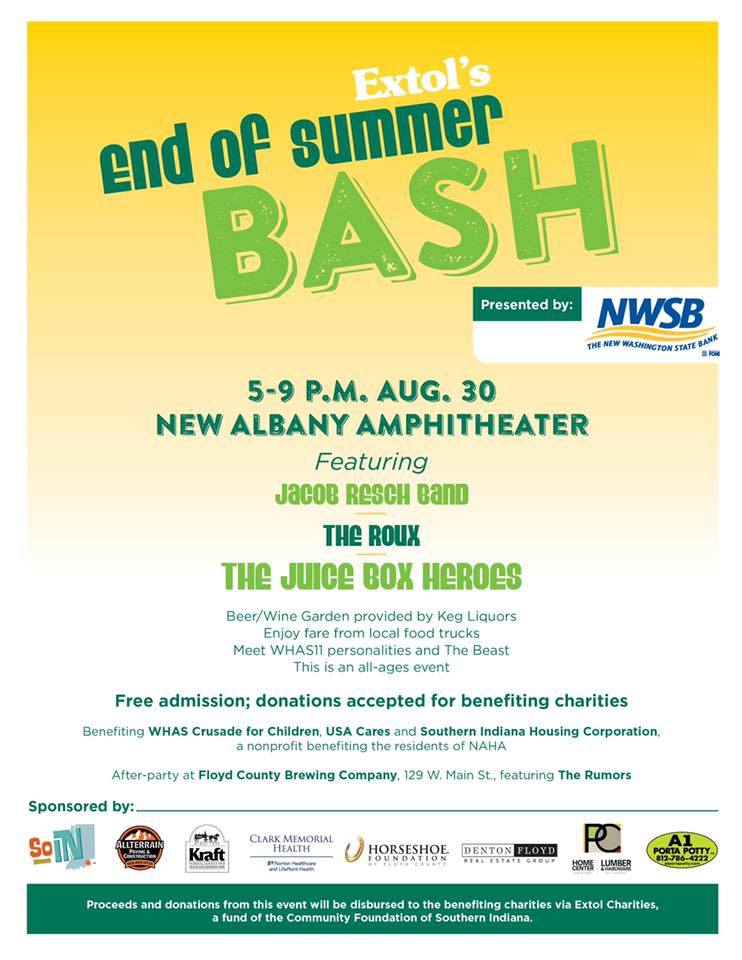 It’s a good thing when local magazines sponsor free community gatherings. Naturally blog readers are encouraged to support this Extol function and events like it. Go there, have fun, and rock on.

I’m taking great pains to make it clear that what you’re about to read is not blanket criticism, or a call to boycott anything, or some sort of hatchet job. It isn’t, not at all.

Rather, as Lieutenant Columbo once said, “There are a couple of loose ends I’d like to tie up.”

On the surface of it, surveying the obvious synergies implied by the fest’s sponsors, just about all of it is benign and sensible.

For instance, there’s participation from New Washington State Bank, which is about to make its presence felt downtown by occupying space in the former Jimmy’s Music Building, which is being remodeled by Steve Resch, whose son Jacob is an outstanding musician booked to play the fest.

There are invaluable community assets like the Horseshoe Foundation and SoIn; the tourism bureau and Extol collaborate to publish the annual area visitor’s guide.

They make perfect sense, too.

The fest’s sponsors include AllTerrain Paving, a company whose profile recently has risen markedly via aggressive bids on Team Gahan’s local construction projects. The company has ties to Neace Ventures, and the latter also has had past involvement with Extol as an investor. Denton Floyd is in charge of the Reisz Building/City Hall project and previously had the brief for Mansions on Main in the former M. Fine Building.

Of course, both AllTerrain and Denton-Floyd (as well as John Neace of Neace Ventures) have donated heavily in the past to Mayor Jeff Gahan’s campaign finance fund, and if I’m not mistaken, they’ve all also made election tithes to the (unsuccessful) county commissioner and (ongoing) at-large city council campaigns of Jason Applegate, who with wife Angie Fenton is the owner of Extol and the sales agent for the magazine.

Regular readers know that we pay close attention to campaign finance, and yet all of the preceding strikes me as boilerplate. Movers move and shakers shake; so it goes in any small city, and readers may draw their own conclusions, if any. Thus far, there’s not much to see.

Extol identifies the non-profit Southern Indiana Community Housing Corporation as a “charity” worthy of inclusion in the bash’s charitable outreach. Proceeds and donations will be disbursed to SICHC (“benefiting the residents of NAHA”), WHAS Crusade for Children and USA Cares via Extol Charities, a fund of the Community Foundation of Southern Indiana.

However SICHC is by no means an autonomous “charitable” organization. It is an appendage of the New Albany Housing Authority, itself captive to Jeff Gahan’s staffing and board appointments, several of whom have board seats on both entities, NAHA and SICHC.

This is a charity? In a world where Bud Light is called “beer,” I suppose anything is possible when mangling semantics. As non-profits go, SICHC’s involvement as a “charity” is stretching the limits of propriety.

I’m told that SICHC originally was set up by deposed NAHA chieftain Bob Lane as a means of advancing voucher housing off site of the various NAHA properties. It may also have been necessary in legal terms to make applications for tax credit-driven projects Lane was pursuing to regenerate NAHA’s physical plant — these being the projects Gahan vehemently rejected in the run-up to the mayor’s seizure of NAHA and subsequent firing of Lane.

Did Extol consider all this?

Glancing at Elevate, we see that whatever else SICHC does to “benefit” residents of NAHA, it is the owner of eight or nine small properties around town (many tied to the abortive Linden Meadows project) and one very large one: Cross Creek Apartments on Green Valley Road.

It’s hard to see SICHC as a “charity” worthy of inclusion in Extol’s festival, and so I sent multiple messages to both Applegate and Extol asking for this relationship to be clarified. Neither of them have replied.

There may be a simple answer, but if so, it isn’t being given, at least yet, although this does explain Applegate sightings at the NAHA administrative offices.

If we still pretend to believe in something approximating journalism, my question is a legitimate one to ask of Extol. Why is SICHC being referred to as a charity when there is so much relevant background being ignored?

Applegate seems oblivious to the plain fact that wearing multiple hats has a way of blurring lines and prompting legitimate questions. After all, he’s the owner of a media outlet who sells ads to many of these entities, and he’s a candidate for local office as an open and enthusiastic supporter of a corrupted mayor whose only real platform is political patronage tied to campaign donations and pay-to-play chicanery … and who advertises heavily in Extol.

Speaking for myself, I have no personal grievances”against” anyone mentioned here, even the ones immersing themselves in Gahan’s soiled web. Rather, my grievance is with the process as we’ve grown to tolerate it, and it’s critical to remember that most folks hereabouts never wanted local government to be about dark money to such a large extent that we’re obliged to spend time following it to the sources.

Unfortunately the political patronage system that always bubbled on low heat has been injected with steroids by Gahan, Adam Dickey, Warren Nash and other exalted Democratic Party functionaries, and consequently we’ve come to a place where the money must be followed.

I regret it this mess, but I didn’t create it, and since “real” journalists like Chris Morris and Susan Duncan refuse to ask these questions, I will, if for no other reason that stubbornness. As Morrissey once observed, the more you ignore me, the closer I get.

I earnestly encourage Applegate and/or Extol to provide an answer, and we’ll provide space here for it, free from extraneous commentary on my part.

Better yet, maybe just commission the esteemed David Duggins to write it, given that SICHC’s involvement probably was his idea to begin with.