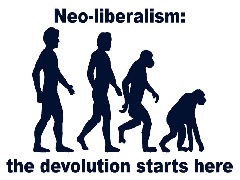 We can only hope.

The Sunset of Neoliberalism, by Max B. Sawicky (Jacobin)

To anyone who lived through the Clinton years — or merely remembers the Obama era — the discrediting of neoliberal ideas that were once sacrosanct among Democrats is nothing short of astonishing.

Cheer up. The Left is winning the battle of ideas. Ideas are the basis for organization, and organization is prior to change. The signs are in the evolution of statements and platforms presented by Democratic presidential candidates. As the economist John Maynard Keynes wrote, eighty and some years ago:

Practical men, who believe themselves to be quite exempt from any intellectual influence, are usually the slaves of some defunct economist. Madmen in authority, who hear voices in the air, are distilling their frenzy from some academic scribbler of a few years back.

It’s our “madmen” (and women) who are more in evidence these days — not as public personalities, but in the guise of campaign commitments offered by leading Democratic politicians. Their ascendance parallels the decline of neoliberal ideology.

In this essay, I’d like to give credit where it is due for the raising of consciousness. In the process, I would like to foster a keener appreciation for the difference between progressive and neoliberal doctrine. What does it mean to be left these days? Everybody knows the extreme point — wholesale socialization of the commanding heights of the economy. But where is the separation between hackneyed liberalism, “woke” and otherwise, and emerging progressive platforms?

As this article was being written, the Sanders campaign released additional, detailed plans pertaining to labor rights, the Green New Deal, and how law enforcement deals with race. In this respect, his opponents are invariably more fated to play catch-up than to reject his proposals. The few who tried to plant a flag on their opposition to socialism are passing from the scene. It’s as if Democratic voters have been thirsting for progressive proposals for decades, and now they will drink as much as can be offered. No candidate so far has proven willing to rain on this parade.

That’s why I say we are witnessing the sunset of neoliberalism.