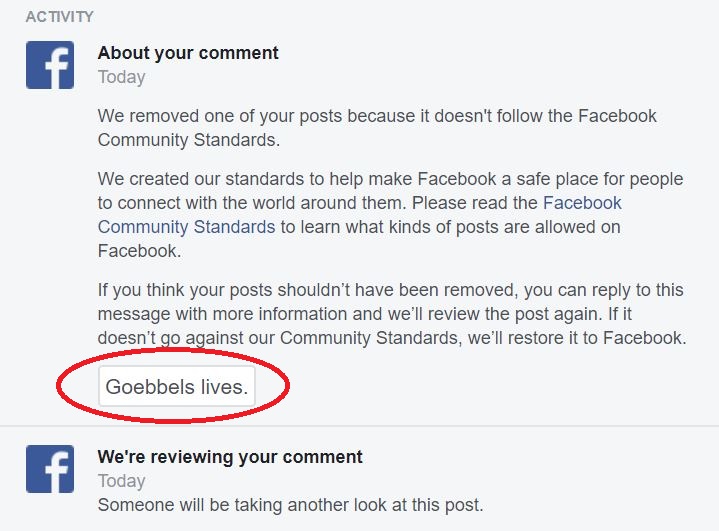 Yes, I understand that Facebook belatedly seeks to cleanse its wretched image after criticism over all manner of contemporary “Nazis” using the social media platform.

Just as obviously the robotic algorithm can’t begin to detect creative sarcasm from a socialist like me who wouldn’t be deploying an historical reference to the likes of a real-life individual if it weren’t valuable as a means of heaping scorn on truth-challenged dullards like the reigning mayor.

It’s hard to decide what I enjoy most about the process of Facebook’s censorship in this instance. It might be the “guilty until proven innocent” default, or the purported proviso promising the opportunity to explain but provides no way to do so apart from telepathy.

Sans any semblance of due process, I’m also blocked from participation in separate pages where I serve as an administrator. I can imagine instances where such a guilt-by-affiliation ban would interfere with one’s ability to perform his or her paying job, all the while without a pathway to communicate with a human at Facebook and come to an understanding about the idiocy.

At least it’s a good learning opportunity for my long-lost cousin Regor to lend a helping hand.

Unfortunately, Regor can’t post at NA Confidential on Facebook. Bluegill, if you’re reading, can I ask a small favor?

As usual, there is plenty of irony herein. After all, Joseph Goebbels developed his “big lie” theory of totalitarian propaganda under the influence of the American advertising industry and its techniques.

It’s a fact that cannot be erased, no matter how hard you try, and in today’s world we seem intent on scrubbing unpleasantness rather than taking the time to explain to people why Goebbels was an enabler of atrocities against mankind. That’s just Disney escapism, isn’t it?

For the entire 72-hour duration of my imprisonment, which ended at 7:00 p.m. on the 23rd, the “support” box at Fb continued to indicate that the post in question was under “review.” Obviously at this point it’s irrelevant to be found not guilty given the sentence having already been served.

Interestingly, with no means of communicating with actual humans throughout this annoying period, I did locate a “additional thoughts” comment box last Friday evening and duly added this:

I used the name of Joseph Goebbels, a real-life figure from history, as an ironic reference to the propensity of local politicians in my town to emit “big lies.” I did not use Goebbels’ name as a glorification of neo-Nazism, which would be impossible given that I’m a Social Democrat. It’s idiotic to scrub Goebbels’ name in this fashion given that I’m an educated individual perfectly able to explain the former propaganda minister’s atrocities against humankind. Your algorithm obviously is resistant to sarcasm, and at this moment you’re making it difficult for me to do my job because I can’t post on group pages that bear no relevance to my personal page. This is all unnecessary and annoying, and while I realize there will be no apology forthcoming from the robot who controls this process, can you please remove the block sooner rather than later so I can return to my life? Thank you.

When I pressed “send,” this was the result, one that summarizes the Facebook malignancy.